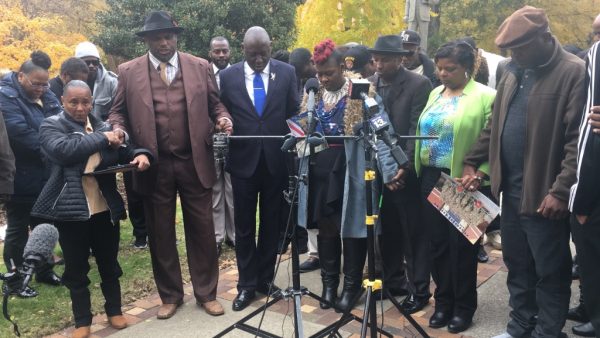 Alabama Attorney General Steve Marshall’s office spent more than two months investigating the shooting death of Emantic “EJ” Bradford Jr. at the hands of a Hoover police officer. The shooting happened on Thanksgiving night at the Riverchase Galleria in Hoover. On Tuesday, Marshall issued a report that said the unnamed police officer was justified in killing Bradford. Marshall’s office will not prosecute the officer.

There were several police officers at the mall that night to monitor shoppers ahead of Black Friday. The two who responded were 75 feet away when they heard gunshots. Initially, Hoover officials said they had shot and killed the gunman, who they said was fleeing the scene with a gun. The next day, they said they were wrong, and that Bradford likely wasn’t the shooter.

Marshall’s report concludes the officer made a split-second decision and shot Bradford after the officer saw him running with a gun toward the area where two shots were fired and two people were wounded. “And that is the perspective that the officer had when he saw Mr. Bradford turn aggressive stance, head to the direction of people that were unarmed, and the officer made the decision that taking action with his firearm was going to ensure the safety of the people there,” Marshall said in an interview with WBHM.

Marshall says Bradford walked a few steps away from where the initial shooting took place, then headed toward Brian Wilson, who was wounded in the shooting, and another bystander. The report outlines Bradford’s rapid movements in those seconds leading up to the shooting. The events unfolded near a JC Penny and FootAction store. Erron Brown, 20, was arrested and charged in the shooting in December.

“Erron Brown shoots Brian Wilson, then along with his companions, runs into JC Penney. E.J. Bradford initially runs in the opposite direction (away from JC Penney), creating a gap between himself and the gunshots. As he creates this gap, Bradford draws his weapon and chambers a round. Bradford then charges back toward JC Penney, gun drawn. Officer 1 shoots Bradford as Bradford is running toward Brian Wilson (the gunshot victim), AC (who is assisting Wilson), Erron Brown (the initial shooter), and several innocent bystanders.”

Marshall says the officer acted in a way as to ensure the safety of those bystanders and the police themselves. An autopsy determined Bradford had been shot three times from behind.

Since the shooting, there have been waves of protests, in part because of the length of the investigation. Much of the unrest has been around the issue of race, specifically the question of whether Bradford was shot because he was black. Until Tuesday, very few details about the shooting had been disclosed. Marshall says that’s because there were dozens of witness accounts and a large amount of forensic evidence state investigators had to examine. “We were making sure that we were able to quickly turn around what I think has been a very transparent reflection of the facts and the law in what we examined as well as why we made our decision,” Marshall said.

Marshall’s office has released only a few seconds’-worth of video footage from the shooting. He says the decision to release such a brief excerpt came after consulting with the Alabama State Bar Association, which cautioned against releasing more. Withholding video, Marshall says, would comply with ethical obligations around the pending charge of attempted murder against Erron Brown, whose case is set to go to a grand jury. Since November, Bradford’s family, protesters, and community activists have pressured state and local officials to release of all video surveillance tied to the shooting. But Marshall rejects claims the state hasn’t been forthcoming with details around its investigation. “We have been very transparent not only with the family but also with the people of Hoover and Jefferson County and the state of Alabama as to what was discovered, why it was relevant, and the decision that was made,” Marshall said.

One gaping question that remains is the identity of the police officer. Marshall says there’s no reason to reveal his identity. “If any other individual were investigated by law enforcement and there was no determination a crime was committed, that information wouldn’t be public,” Marshall said. “There’s no reason for an officer to be treated any differently.” Marshall said there’s no value to the public in knowing his identity.

In the meantime, a host of questions swirl, including the officer’s record, his training, and any disciplinary measures that might’ve been a factor recently or in his past. The ACLU issued a statement on Tuesday denouncing Marshall’s decision not to prosecute the officer. “The Attorney General’s characterization of E.J. Bradford as a ‘threat’ that needed ‘eliminating’ reveals how little regard the Attorney General has for the life of this Black man,” Dillon Nettles, ACLU of Alabama policy analyst said. “Regardless of what the Attorney General of Alabama said in his report, E.J. Bradford’s life mattered. Black lives matter. We won’t stay quiet while law enforcement continues to inflict lethal violence against Black people and attempt to justify it”

Protesters plan to demonstrate in front of Marshall’s office in Montgomery Wednesday.