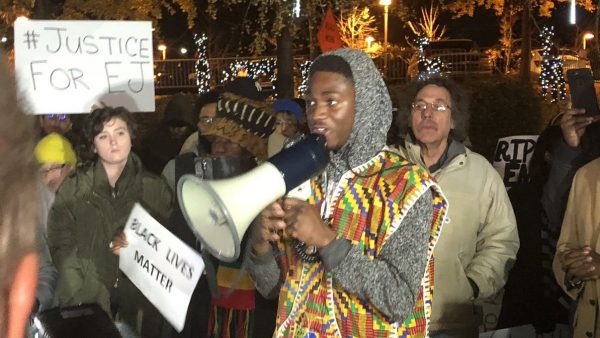 Carlos Chaverst Jr. (center) is the organizer of the protest.

About 65 people protested Monday night outside the Hoover Police Department in hopes of pressuring police to release video of Emantic Bradford Jr.’s death.

This is their second protest in the past three days, and organizer Carlos Chaverst Jr. says they do not plan to stop until they get answers. And he says the only way to do that is to make the City of Hoover uncomfortable.

Protesters talk about how they still don’t have answers for the police shooting of #EmanticBradfordJr https://t.co/lt0QBvsDpI

Bradford died Thanksgiving night after he was shot by a police officer working security at the Riverchase Galleria Mall in Hoover. Initially, officials said Bradford was engaged in a fight with an 18-year-old when he pulled out a gun and shot the teen. A 12-year-old bystander also was wounded that night. But officials later retracted the statement saying it was “highly unlikely” that Bradford fired the shots that injured two people.. Officials now say the shooter could still be at large. While the group’s protest started peacefully, it was not long before emotions rose. Protesters left the police department and blocked traffic as they made their way down Highway 31 towards the Riverchase Galleria. Officers from the Hoover Police Department were outside watching the protest. They blocked traffic on both ends of the highway and diverted cars to turn around.

Chaverst says they planned to protest where “EJ’s blood was spilled on the floor” outside the Footaction in the mall. But some mall employees say the protests made them feel uncomfortable. Workers at the JCPenney’s next to Footaction closed and locked their doors when the protesters arrived saying they “started peacefully but were becoming too wild up.”

Protesters are now inside the Galleria Mall. They walked down Highway 31 from the Hoover Police Department. https://t.co/aFO4y4TNap — WBHM 90.3 FM (@WBHM) November 27, 2018

After spending about 15 minutes inside the Galleria mall, the protesters made their way back down Highway 31 towards the police department. But organizer, Chaverst Jr. says this protest is not the last. He says they plan to attend the Hoover City Council meeting Tuesday and then Hoover Mayor Frank Brocato’s house later that night.

The Hoover Police Department says no protesters were arrested during the protest.