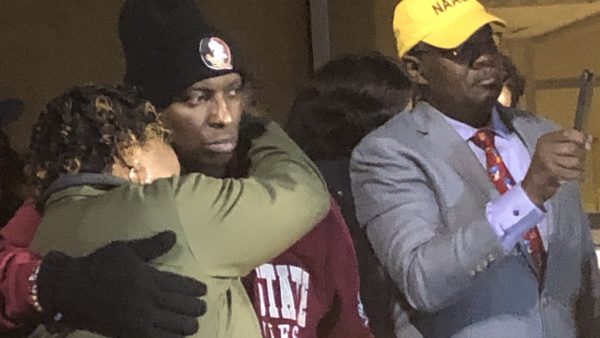 The fatal police shooting of a young black man at the Riverchase Galleria mall in Hoover on Thanksgiving has sparked weeks of vigils, protests and racial unrest. Police have arrested a number of demonstrators who marched through retail outlets, restaurants, and neighborhoods around the city to demand justice and transparency in the shooting investigation. For some, the shooting re-opened old wounds in the Birmingham area, decades after the civil rights movement.

The Rev. Mike McClure leads a large mixed-race congregation at The Rock Church in Birmingham.  The controversy has highlighted his role a peacemaker and an advocate for social justice. A few days after the fatal police shooting of 21-year-old Emantic Bradford Jr., McClure met with Hoover church and city leaders. Most of them were white. He told them about his reality.

“When they look at me, they see a black pastor,” he says.  “The problem that most people don’t understand is that when it comes to African Americans, regardless of what we do, we have to be black first.”

But the growing racial tensions since the shooting are hard to ignore. The attorney representing Bradford’s family and many protestors say police shot Bradford because he was black. Hoover Mayor Frank Brocato says Hoover police aren’t racist. McClure says we’re not far removed from the 1960s when civil rights foot soldiers like Bishop Calvin Woods — his grandfather — marched in Birmingham to dismantle segregation.

Cat Goodrich is a minister at First Presbyterian Church in downtown Birmingham. She’s part of Faith in Action, a group of religious leaders who address social justice issues.

Back in 1963, the First Presbyterian pastor was among eight clergy members who took out a newspaper ad that urged Dr. Martin Luther King Jr. to wait for the courts to settle discrimination issues.

“Because of our history, it is imperative for us to see this moment as an opportunity,” she says. “A tragedy has happened, and how we respond I think could change the course of our city and the broader Birmingham area.”

Goodrich, who is white, says in the aftermath of the shooting, everyone should be concerned about race relations.

“White people, I think, need to reflect and confess how we might be implicated in the inequalities that exist in our communities,” Goodrich says.

Sheila Tyson is a Jefferson County Commissioner.  She says she still experiences discrimination and it’s an issue this community has to confront if things are going to change.

Anecdotally, she’s heard from black friends who say they’ve experienced racial profiling by police in Hoover and other cities.

“Each person has value. I have value. I’m somebody,” she says. Embracing those qualities, she says, can help heal the wounds of racial division.