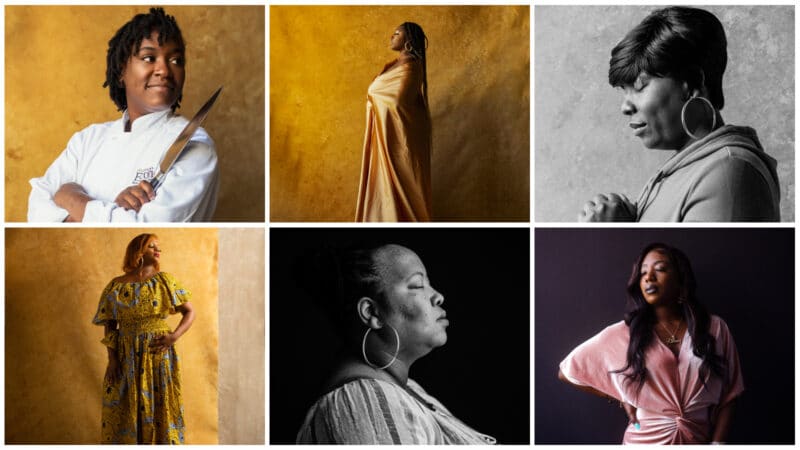 Six mothers who took part in Springboard to Opportunities’ Magnolia Mother’s Trust guaranteed income program in Jackson, Mississippi had their photos taken to show the full humanity and spectrum of Black motherhood, countering the stereotypical narratives that surround Black mothers and pushing against the idea that Black women are a monolith. The photos were presented at the non-profit’s “A Night of Storytelling” event on April 21, 2022. The women are (left-right, top-bottom): I’esha Granderson, Cajania (Coco) Brown, Erica Brown, Wilma Ammons, Annette Mikell and Khadaja Ryals.

By Stephan Bisaha and Aubri Juhasz

After months of planning, several cities in the Gulf South are finally ready to give guaranteed income a test run.

Birmingham, New Orleans and Shreveport, Louisiana each received a $500,000 grant to pilot a guaranteed income — the idea that one of the best ways to help people in need is to give them regular cash payments without any strings. Participants for each city’s pilot have been selected and, in some cases, money has already been sent out.

In March, Shreveport sent out its first $680 monthly payment to 110 single parents near or below the federal poverty line. Birmingham’s pilot is focused on 110 moms who received their first deposit last month as well. New Orleans is giving its money to young people, ages 16-24, out of school and work and said it will begin sending them money by the end of this week.

Mayors For A Guaranteed Income, an advocacy group for a national guaranteed income, is paying for at least part of all three programs.

But those unwilling to wait for these roughly year-long pilots to end to see what impact a guaranteed income has can look to Jackson, Mississippi. For the last three years, Springboard to Opportunities, a local non-profit, has been successfully running its own guaranteed income program focused on helping Black mothers living in affordable housing.

The pilot, named the Magnolia Mother’s Trust, began in late 2018, giving an initial group of 20 moms $1,000 a month for a year — free to use however they wanted. Many moms used the payments to help cover monthly expenses or pay down debt, while others put the money toward education, better housing or invested it in their own small businesses.

Since then, the trust has gone from pilot to program and has given out two additional rounds of cash to a total of 210 moms. It has also become a national model, inspiring cities across the country to launch their own programs.

Last week, Springboard invited the moms to share their stories about the program and Black motherhood more broadly during a live storytelling event. Kimberly McNair, a mom of two who was part of the trust’s most recent round of payments which ended last month, told a story about how the $1,000 checks helped turn a potentially crippling situation into a bearable one.

While McNair was a part of the pilot, she crashed her car into a driver who made an illegal U-turn. She wasn’t hurt in the crash, but her vehicle was totaled. Neither McNair nor the other driver had insurance at the time, so she had to pay for a new car out of pocket.

Her mind ran through all the consequences of losing her car. How would she get to work? Run household errands? Or drop her kids off at school?

When it comes to covering an emergency expense of $400, about 37% of American adults said they didn’t have the cash on-hand to cover it, according to a Federal Reserve survey conducted before the pandemic.

But thanks to the $1,000 checks, McNair was able to cover her own emergency expense without going further into debt.

“The money was there,” she said at the event. “All I had to do was find a car and withdraw some cash. Sounds like a simple process? Well, it was.”

While the money helped her buy a car, the safety net it provided was temporary.

McNair works full-time for the state but still makes well below Mississippi’s median income. Her salary, and the money she brings in from a side business baking birthday cakes, is usually enough to cover her family’s expenses, but saving money each month can be difficult.

“Hopefully I don’t have any big incident like before, then I probably would start worrying again,” she said. “But as long as I continue to work and continue to try to put something aside, I think I will be alright.”

After McNair told her story, Jackson Mayor Chokwe Antar Lumumba spoke to the live and virtual audiences. He spoke of his fondness for the Magnolia Mother’s Trust and said he frequently brags about the program being in his city.

Lumumba said he hopes to create a city-led guaranteed income program as well, but so far has failed to secure funding. Jackson’s city council rejected his proposal to spend American Rescue Plan funds on such a program last August. Stories like the one McNair shared at the event, Lumumba said, can be used to help change the city council’s mind.

“What you learned here, we’re going to [use it to] put pressure on our city council so that we can sustain this and expand this as a city program,” Lumumba said.

But even cities with secured funding still face roadblocks. New Orleans and Shreveport announced their grants back in 2020, but the programs have taken a long time to get up and running.

Shreveport spent time fundraising additional money to spend and both cities had to fulfill obligations associated with the $500,000 grants.

MGI partner cities are expected to run their pilot programs as research studies so the nonprofit has data to help build its case for a national guaranteed income.