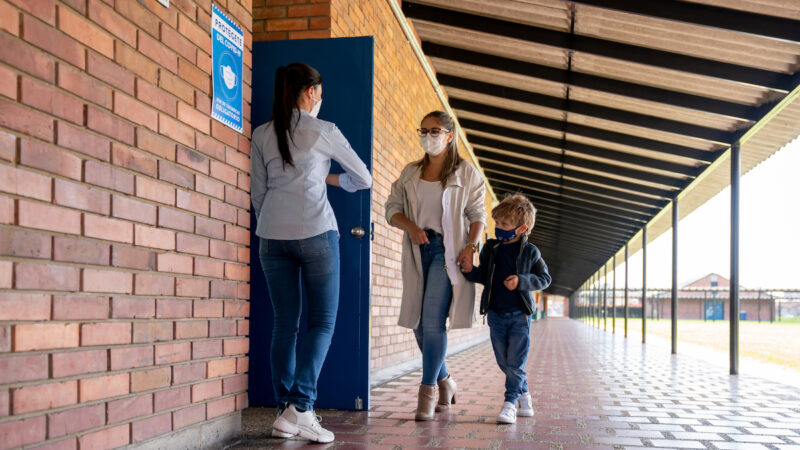 It’s many students’ first week back to school from winter break in Jefferson County and parents are grappling with rising COVID cases in the community due to the highly contagious omicron variant and an increase in pediatric hospitalizations around the country.

Some parents in Homewood, Hoover, and Vestavia Hills told WBHM their frustrations with their respective school districts’ response to the new surge and are calling for universal masking, better social distancing and more transparency.

As the mother of two children, one of the most important things Dr. Julie Kanter-Waskho wants is for them to be safe. As a physician, she thought it was clear what Homewood City Schools should do at the beginning of the semester.

“So I thought with this new surge it would be fairly obvious we would, of course, go back to requiring masks. I actually didn’t contemplate at all that that wouldn’t happen,” Kanter-Washko said.

Last year, she transferred her son to Altamont, a private school that currently requires masking, because she was disappointed with the virtual schooling offered. This year, only Kanter-Washko’s elementary school-aged daughter is in public school at Shades Cahaba, but she was once again disappointed when the school decided to move to a mask-optional policy and subsequently lessened its social distancing procedures. For example, going from eating in the classroom to eating in a cafeteria where most kids take their masks off to eat.

Homewood City Schools and Hoover City Schools have adopted a policy that monitors positivity rates in schools to determine whether masks will be required. However, since implementing this procedure both school districts have never gone back to requiring masks. Kanter-Washko said she was surprised COVID testing wasn’t prioritized in the new semester. She said the school told her they would monitor rates once classes start.

“My daughter, who’s 10, said ‘well, why would you want to bring COVID in the school? Wouldn’t you want to keep it out?’” Kanter-Washko said.

According to the Alabama Department of Public Health’s COVID-19 dashboard, every county in Alabama currently has a high level of community transmission, and the United States hit one million COVID cases earlier this week.

Just over 3% of children aged 5-11 have been fully vaccinated in Alabama. Despite her child being vaccinated, Stephanie Ensminger is still concerned about her child contracting COVID in Hoover City Schools, in part, due to the district’s mask-optional policy. She would also like better transparency with how decisions are made.

“I’m disappointed in the current superintendent because in his communication, he seems much more concerned with upsetting anyone and hurting people’s feelings than he is with making the decision from a point of keeping our children safe,” she said.

Superintendent Dee Fowler said while he respects the parent’s opinion, it’s a matter of perspective, according to a statement to WBHM by Hoover City Schools Public Relations Coordinator Sherea Harris-Turner. She adds administrators are monitoring cases and are prepared to change procedures if needed.

Some school districts still require masks, such as the Birmingham City Schools. But those which aren’t are following guidelines laid out by the Centers for Disease Control and Prevention and the Alabama Department of Public Health. Currently, both of those health authorities strongly recommend masks in schools, but do not require them outside of school buses. There is also no way for separate school districts to have unified COVID policies.

“I would say it’s entirely irresponsible, contrary to the advice and suggestions of the mainstream medical community. And as a parent, it’s disappointing, and it’s more than disappointing, it’s infuriating,” said Pascal Caputo, the father of two children in the Vestavia Hills School System.

Caputo said he’s also frustrated with the lack of transparency from Vestavia, especially because one of his children is immunocompromised.

Another big concern for Caputo is that this year could be a repeat of spring 2020 where students spent the rest of the school year online.

“My fear is that if we maintain an optional mask policy, I think that it’s very likely that we’ll end up in a situation where we’ll have to go back to virtual schooling,” Caputo said. “I don’t think that’s optimal for the children.”

Mountain Brook City Schools has already gone virtual for the first week of the school year due to staffing shortages related to COVID-19. Homewood High School also announced that the first week of school would be virtual due to a high number of students testing positive.