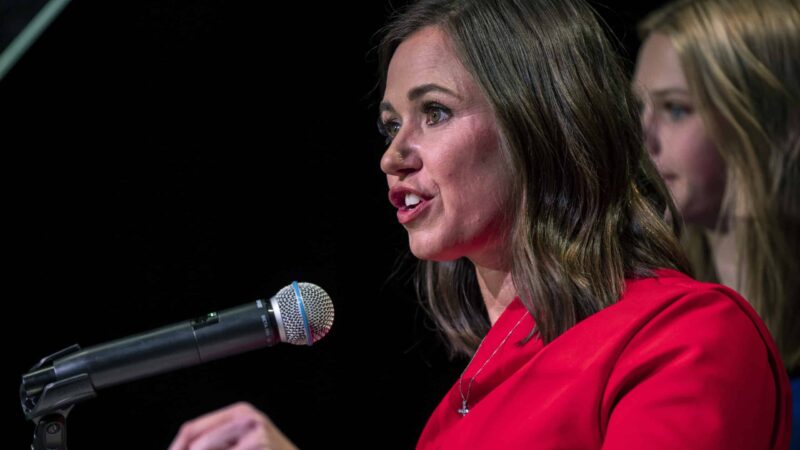 Republican Katie Britt speaks to supporters at her election night watch party after winning the U.S. Senate race in Alabama, Tuesday, Nov. 8, 2022, in Montgomery, Ala.

Control of Capitol Hill still hangs in the balance after Tuesday’s election but there was little doubt what would happen in Alabama. Republicans continued their stronghold at the state level with Gov. Kay Ivey claiming a second full term and Katie Britt winning election to the U.S. Senate. Britt becomes the first woman elected to the Senate from Alabama. She’s also a mother of school-aged children. Ivey, if she finishes her term, would become the longest continuously serving governor in Alabama history.

WBHM’s Andrew Yeager spoke with Lori Owens, a political science professor at Jacksonville State University, for analysis of the results.

I want to ask about Katie Britt’s victory, and I want to ask about one particular aspect. She’ll be succeeding longtime Senator Richard Shelby, who’s one of the most influential figures on Capitol Hill. What kind of position will she be in, given that she’s a freshman senator but also served as Shelby’s chief of staff at one point? So she’s not totally unfamiliar with the Senate. What’s the course ahead look like for her?

There’s several things of note. As you mentioned, she did serve as Shelby’s chief of staff. So she knows how D.C. works. She already has connections there. She’s personable. The other thing she actually has going for her is the national Republican Party realized that they need to do better with women voters. And so it would be to their advantage to make sure that she is out front. So professional women in particular can see that. And not only is she a professional woman, but she’s also a mom. So I expect that you will see her pretty out front, even though she’s going to be low on the totem pole in terms of seniority. But there’s ways that you can get noticed. And one of those ways is being a hard worker.

Gov. Kay Ivey won reelection easily. She had minimal opposition from a Democratic and Libertarian candidate. Given that, how do you read Ivey’s victory?

I think she keeps doing what she’s doing. She had some significant primary challenges. But it turned out very well in her favor. So people overall have a general positive feeling about her, even though she had some criticism from some over how she handled COVID. Overall she tries to project the image of “Alabama is open for business,” and they’re recruiting business and the industry and so forth. But the bulk of the work that’s going to come would come from the leadership in the legislature. Ivey’s role would be to get out there and project a positive image of the state. Of course, having a female elected in this state helps our standing in the country too.

Katie Britt is the first female elected from Alabama to the Senate. Voters now have chosen a female governor two times in a row. Does that say anything about women in politics in Alabama?

If you look back, going back, even 18, 20 years when female candidates used to run just for those lower offices such as state auditor, secretary of state, things of that nature, they’ve done well. Some of the hardest working candidates I’ve ever seen have been female candidates. I don’t think there’s any opposition at all to electing women to a number of these positions.

I want to ask about the Libertarians and the Democrats. The Libertarians did field several dozen candidates, and while they didn’t win any offices, they did poll around 15% in some statewide contests that didn’t have a Democratic candidate. Meanwhile, the Democrats continued a poor showing up. Where does that leave those two parties?

I think with the Libertarians, there are a lot of Libertarians on the ballot all across the country this time. So I think you see the the dissatisfaction with the two major political parties. I usually have students who will come to me and say, “hey, you got a college Republicans and a college Democrats. Do you have Libertarians?” So you have some conservatives that feel like principles regarding civil liberties and finances are out of control, and so they would be more inclined to gravitate toward the Libertarians.

In terms of the Democrats, for the Democrats to make some headway in this state, they would have to separate themselves from the national Democratic Party. And because of the infighting within the state Democratic Party, I don’t see that happening. Now, one thing that they could do as a strategy that the Republicans finally did — Republicans in this state used to try to build a party from the top down. They finally decided they needed to concentrate on county commission races and school board races. So if the Democrats would start fielding some respectable candidates in some of these lower offices and just go at it one race at a time and build up their base and build up their following, they might have some prospects at some point. But in the short haul, their prospects aren’t good.