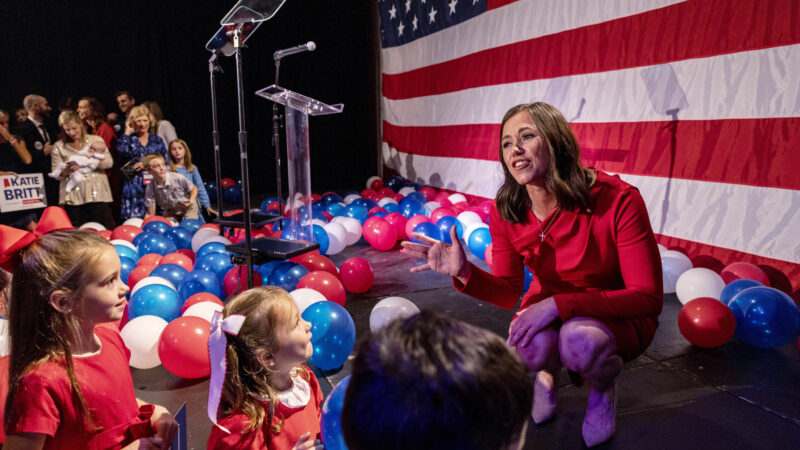 Katie Britt greets young people in the audience at her election-night watch party Tuesday, Nov. 8, 2022, in Montgomery, Ala. Britt won the U.S. Senate race in Alabama, becoming the first woman elected to the body from the state.

MONTGOMERY, Ala — Republican Katie Britt on Tuesday won the U.S. Senate race in Alabama, becoming the first woman elected to the body from the state.

Britt will fill the seat held by Richard Shelby, her one-time boss who is retiring after 35 years in the Senate. Britt was Shelby’s chief of staff before leaving to take the helm of a state business lobby. Britt defeated Democrat Will Boyd and Libertarian John Sophocleus.

Britt, 40, cast herself as part of a new generation of conservative leaders and will become one of the Senate’s youngest members. She will be the first Republican woman to hold one of the state’s Senate seats and the state’s first elected female senator. The state’s previous female senators, both Democrats, had been appointed.

“Tonight, parents, families and hard-working Alabamians across the state let their voices be heard. We said loud and clear this is our time,” Britt told supporters at her victory party in downtown Montgomery.

Britt, who noted her early dismal poll numbers and how some initially dismissed her notion of running for Senate, said her campaign is “proof that the American dream is still alive.”

Fueled by deep pockets and deep ties to business and political leaders, Britt ran under the banner of “Alabama First” and secured the GOP nomination after a heated and expensive primary. She was first in the initial round of voting and then defeated six-term Rep. Mo Brooks in a primary runoff.

Brooks, who ran under the banner “MAGA Mo” — Donald Trump’s Make America Great Again campaign slogan — and was initially endorsed by the former president, had been an early favorite in the race. But Brooks faltered under a barrage of attack ads and lackluster fundraising. As Britt surged in the polls, Trump rescinded his endorsement of Brooks and swung his support to Britt.

Britt began her political career working for Shelby. She thanked the outgoing senior senator for taking a chance on her 20 years ago and called him “Alabama’s greatest statesman” who left a lasting legacy on the state.

The senator-elect was introduced by her husband Wesley Britt, a former football player for the New England Patriots and the University of Alabama, who said his best title is, “Katie’s husband.”

Flanked by her husband and two-school-age children, and with her speech occasionally punctuated by the sound of children popping the red, white and blue balloons that fell to celebrate her victory, Britt called herself a “Mama on a mission” to get things done in Washington.

Britt, who spent much of her race in partisan appeals, criticizing the policies of President Joe Biden and lamenting a country she said she no longer recognized, promised to work for all Alabamians, “even those that have different beliefs than I do.”

“No one will worker harder than me in the United States Senate. I am going to listen to you, not lecture you. I know that every one of you is not going to agree with me on every single issue and that’s OK,” Britt said.

“I am going to be a voice for parents and families and hard-working Alabamians across this state,” she said, “and I’m going to work tirelessly every single day to make Alabama proud.”