What To Know About The Delta Plus COVID Variant: How Serious Is It? Will Vaccines Work? 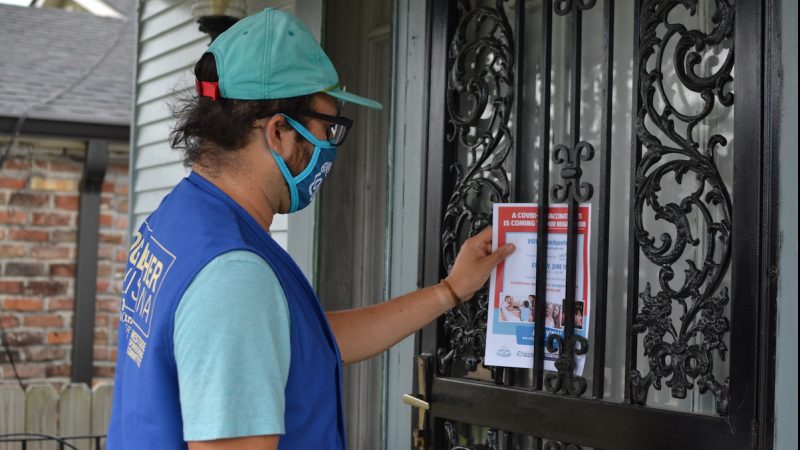 Together Louisiana volunteer Hugo Martinez leaves an informational flyer on a door about a COVID-19 vaccination event in New Orleans.

Louisiana’s first case of the delta plus variant — a mutation of the highly transmissible delta variant of COVID-19 — was identified this week.

The delta variant, technically known as B.1.617.2, was first seen in India and is now circulating around the U.S. The strain is much more virulent and much more contagious than the original coronavirus. The Centers for Disease Control and Prevention says it is on track to become the dominant strain in the U.S. in the coming weeks and is now responsible for at least 20% of coronavirus infections.

It is still unclear how this mutation will alter the properties of the coronavirus. Dr. Joseph Kanter, Louisiana’s public health officer, says more data has to be collected on delta plus, but that the delta variant is worrying in itself.

“I’ve had lots of urgency for the last few weeks. Looking at what delta has done in other countries, I think we’re going to have a spike in cases,” Kanter said.

Scott Harris, the public health officer for Alabama, says that is partly due to limited capacity for genetic sequencing.

“We are not performing genomic sequencing on a large number of samples at this time, so we suspect we have many more cases than we have identified,” Harris wrote in an email. “ADPH is certainly concerned about the spread of a more highly transmissible variant, especially given the low vaccination rates in some parts of our state.”

Last week, Dr. Rochelle Walensky, director of the CDC, called the delta variant “hyper transmissible” and said it is responsible for a 10% spike in COVID-19 cases in the U.S.

The delta variant has already sparked new outbreaks across the globe.

So: Here’s what you need to know about both COVID-19 mutations.

How Will The Delta Plus Variant Behave?

Researchers at Ochsner Health in Louisiana announced last week that they have found the first case of the delta plus variant in a sample taken in early June from a person in New Orleans.

The discovery is part of a health department effort to boost surveillance of the coronavirus by sequencing the variants circulating in the state. Researchers are testing samples of the virus taken from people who have been reinfected, are immunocompromised or have been hospitalized.

But what the delta plus variant means for the pandemic is unclear. There is concern that it could be an even more dangerous iteration of the coronavirus, but because the variant is so new, it is not known whether the mutation makes it even more contagious or likely to cause greater illness or death, Kanter said.

“We don’t really have great data on it,” he said. “Variants emerge all the time.”

Kanter said the only way to know how deadly the delta plus variant will be is to give it more time.

How At-Risk Is The South For Delta Variant Outbreaks?

The delta variant poses a significant risk to the entire South, specifically to those who are unvaccinated.

Analyses by both the New York Times and the Washington Post have shown that new cases of COVID-19 are almost exclusively limited to those who haven’t been vaccinated.

Across the Gulf South, health officials have noted that almost all new cases of COVID-19 are among the unvaccinated.

The slow pace of vaccinations across the region is causing concern, as the delta variant spreads. In Louisiana and Alabama, just over 40% percent of adults over 18 are fully vaccinated, according to data from the CDC. And in Mississippi, that figure is under 40% percent.

Kanter said it is unclear whether Louisiana will mandate masks but that it is a possibility if the CDC recommends it.

How Prevalent Is The Delta Variant Expected To Be In Gulf States?

The original delta variant emerged in India in December, and it has become the most dangerous strain of the coronavirus, igniting global concerns of new waves of outbreaks, sparking curfews in Portugal and spiking hospitalizations in the U.K.

It was first identified in Louisiana in May in Shreveport, and Kanter said the delta variant will be the dominant strain in Louisiana “within a month’s time.”

That means it will make up more than 50% of cases here. (Check out the CDC’s variant tracker for a look at the spread of mutations of the virus in the U.S.)

It’s expected to dominate cases in Mississippi soon, as well.

“It’s easier to spread from person to person, probably about 60% more transmissible,” Kanter said. “We know it’s more virulent, meaning it’s more likely to make people sick. If you get it, you’re going to be more likely than the prior variant to have to go to the hospital.”

Will COVID Vaccines Work Against The Delta Variant?

CDC director Walensky has said fully vaccinated people are “safe” from the delta variant and other mutations of the coronavirus circulating in the U.S.

Studies suggest that the complete dosage of many COVID-19 vaccines, including the Pfizer and Moderna vaccines and the Johnson and Johnson vaccine, are highly effective at preventing an infection from the delta variant.

Kanter called it “fortuitous” that the vaccines are a good match for the variant, but noted there is no guarantee that will be true future variants, or even the delta plus variant.