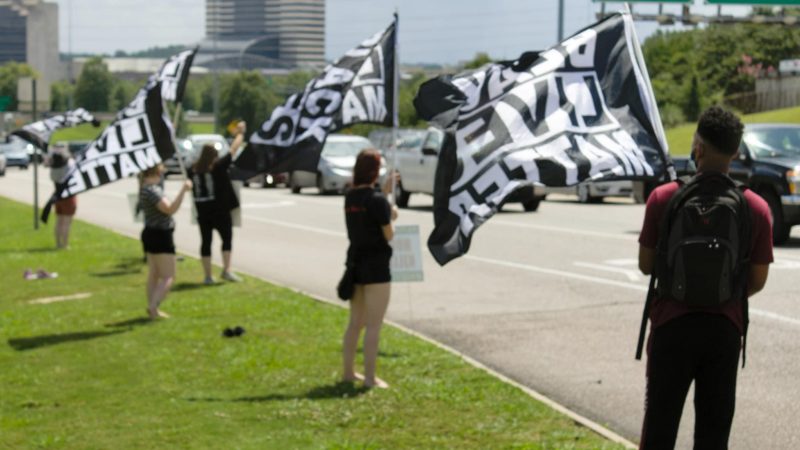 Protesters line up along US Highway 31 near Hoover City Hall.

The police killing of George Floyd in Minneapolis sparked daily protests in Birmingham and surrounding cities.

Now, three months later, the protests have died down except in Hoover.

Protesters continue to hold almost weekly protests in Hoover, where police killed a black man at the Riverchase Galleria Mall in 2018. The officers involved were never publicly identified.

The group said that while the other cities have agreed to review department police policies, Hoover has been silent.

Karan Vance with Alabama Rally Against Injustice said talks are at a standstill.

“We want them to listen to us,” she said. “And until they listen and actually start to change things, we’re going to keep protesting.”

Earlier this month, about a dozen demonstrators with Cell A65, staged a “die-in,” in which they laid on the ground to imitate dead bodies, at the Riverchase Galleria. But they were met by Hoover police.

“We’ve seen a recurring narrative where protesters antagonize the police and say and do things that they may have a constitutionally protected right to do,” he said. “But that certainly set the stage and the police have shown tremendous restraint.”

Rice said city officials aren’t ignoring the protesters’ demands. Mayor Frank Brocato met with them once.  But Rice admits Brocato’s re-election campaigning got in the way of further conversations.  He said now that Brocato has been elected for another term, city leaders can focus on meeting with groups willing to have productive conversations.

Editor’s note: The original story identified Alabama Rally Against Injustice as the group holding frequent protests in Hoover. Various groups, including Cell A65, are among those protesting regularly in the city.