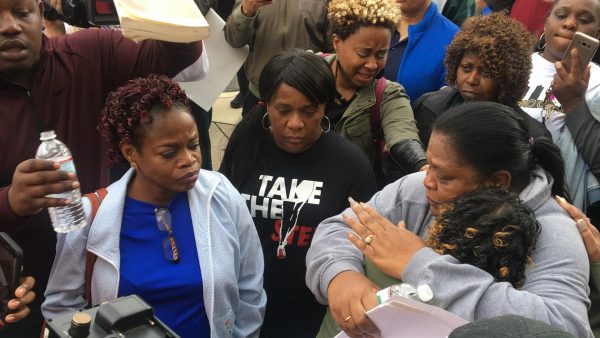 Demonstrators gathered at the Riverchase Galleria to protest the killing of E.J. Bradford Jr. by a Hoover police officer.

Emotions ran high during a protest at the Riverchase Galleria Saturday afternoon as demonstrators demanded justice for 21-year-old Emantic Fitzgerald Bradford Jr. Bradford was shot and killed by a Hoover Police officer after a shooting that injured two others Thanksgiving night. Investigators now say it’s likely Bradford was not the shooter.

The protest, organized by Carlos Chaverst Jr., began outside of Macy’s and moved throughout the mall. Protesters chanted “no justice, no peace,” urging bystanders to spend their dollars elsewhere. Demonstrators paused for “a moment of silence” when they approached the spot where Bradford was shot and killed on the second floor outside of JC Penny’s.

As protesters disbursed, many asked “what’s next?” They questioned the leadership of Hoover Police Chief Nick Derzis and demanded the name of the officer who fatally shot Bradford. Dervis and other police officials initially said Bradford was the man who shot and wounded an 18-year-old and a 12-year-old, but on Friday issued a statement saying their initial assessment was wrong. “Over the past 20 hours, the Jefferson County Sheriff’s Office investigators and crime scene technicians have interviewed numerous individuals and examined several critical evidentiary items,’’ Dervis said in a statement. “New evidence now suggests that while Mr. Bradford may have been involved in some aspect of the altercation, he likely did not fire the rounds that injured the 18-year-old victim.“

The investigation is being handled by the Alabama Law Enforcement Agency.