Shooting at The Galleria Leaves One Dead 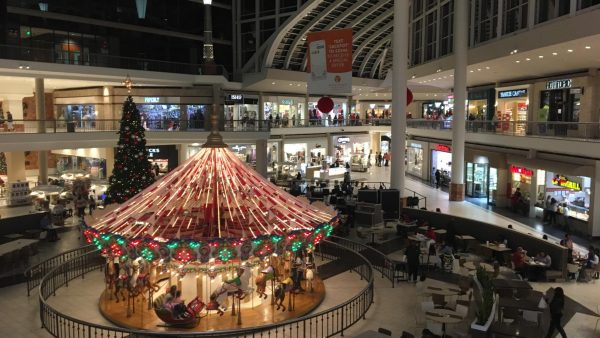 The shooting happened Thanksgiving night at the Riverchase Galleria.

This story has been updated to reflect that the man shot and killed by police that night was not the gunman, as Hoover police originally stated. Police fatally shot 21-year-old Emantic “E.J.” Bradford Jr.

The Riverchase Galleria has reopened after two people were injured and one person was killed in a shooting on Thanksgiving night.

A Hoover Police spokesman said officers found a handgun near Santa’s Village, although it is unclear whether it was involved in the case.

At least two people were injured and one person is dead after a shooting at the Riverchase Galleria in Hoover. The shooting happened on Thanksgiving night, as shoppers filled stores in search of early Black Friday deals.

It started when two men got into a fight on the second floor of the Galleria a little before 10 pm. Police say one of the men was armed and shot an 18-year-old, who is believed to be in serious condition at UAB Hospital. Hoover police officer say they shot and killed the gunman. (Police officials later said that person was not the shooter.) A 12-year-old girl also was wounded and is being treated at a hospital.

Morgan Phillips was shopping at the mall with her sisters and her mother. She and several others hid in the back of a Bath & Body Works store.

“We were all just laying on top of each other,” she said. “I know I was laying there wondering what’s it gonna feel like if I get shot? Am I going to get home to see my son?”

She says shoppers from other parts of the mall stampeded the store looking to escape the gunfire. “You could hear candles crashing, people throwing their stuff in just fear.”

The increased law enforcement presence at the mall during the Thanksgiving holiday meant many officers were already on the scene when the incident took place. But Hoover Police Chief Nick Derzis said police hope extra staffing during the holidays also deters crime.

“I would hope that people coming out on a holiday night to enjoy themselves and find bargains, what people are supposed to be doing, and not engage in the nonsense that we had tonight,” he said. Derzis said he didn’t anticipate any change in protocol as a result of the shooting. “We’ve been doing this for over 30 years. We’ve never had a situation like this occur on Black Friday or over the holiday season.”

The mall will be closed until further notice, mall officials tweeted Thursday. And because a Hoover police officer was involved in the shooting, the Jefferson County district attorney will handle the investigation.

We are devastated by the incident that happened tonight in our shopping center. We are working closely with the Hoover Police Department. While there is no current danger to our community, we will remain closed until further notice.

Hoover Mayor Frank Brocato said the mall was one of the safest places in America and attracts shoppers from all over Alabama. “I’m just grateful for the rapid, professional response of our police officers,” he said. “They acted appropriately and quickly and acted in a way that prevented something that could have been much worse than what we have here tonight. It’s already a bad situation,” he said.