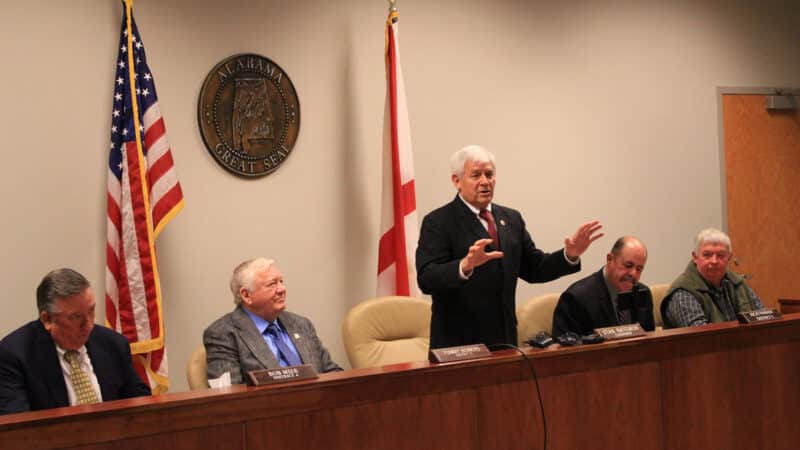 St. Clair County Commission Chairman Stan Bateman discusses a resolution to declare a state of emergency in the county on Jan. 3, 2023.

The St. Clair County Commission declared a state of emergency Tuesday in response to a fire at an environmental landfill outside Moody that’s been burning for more than a month.

During the emergency meeting, Commission Chairman Stan Bateman said that the county doesn’t yet have a plan for how they will put out the fire, but declaring emergency conditions will allow the commission to get state and federal funds to put out the blaze.

Because the fire is largely underground, officials aren’t sure what exactly is burning. Residents in communities like Trussville, Vestavia Hills and Birmingham report smelling smoke.

Inspection records from the Alabama Department of Environmental Management go back to 2013, when regulators issued a violation to the landowners for having unauthorized waste such as tires, appliances, and construction materials at the property — which is only supposed to have unregulated vegetative waste, like trees and stumps.

In the most recent ADEM memo from 2022, an inspector at the site saw very little unauthorized waste, but pointed to previous investigations in 2020 and 2018 that said waste like scrap tires and construction materials had been covered with dirt and tree cuttings.

ADEM said in a Dec. 29 press release that they are not authorized to take action at this time “unless hazardous materials or regulated waste are involved.” After the fire is put out, ADEM says it will “take appropriate enforcement actions” against the site’s operator.

When it comes to environmental oversight, the commission’s hands are tied, according to county attorney James Hill.

Michael Hansen, the executive director of GASP, a local advocacy non-profit focusing on air pollution, told the commission the group had already installed particulate monitors near the property and plans to do air sampling to determine what specific toxins are in the smoke. Hansen said he will release that information when it’s available.

Hansen criticized ADEM for not doing air and water testing, despite having evidence that the site contained unauthorized waste.

“ADEM has not been doing its job. They’ve been asleep at the wheel, and it’s really unfortunate,” Hansen said.

Hill said that the commission’s immediate priority is putting the fire out and mitigating the smoke that is directly affecting those who live nearby. He said he expected the county’s engineer to come up with a recommendation for mitigating the fire “in the next short period of time.” At that point, the commission will go to the state to ask for funding and help administering the plan.

“In order to effectively and correctly address this situation, it will be incumbent upon the state of Alabama and/or the federal government to provide funds necessary to address this particular emergency. These funds are going to have to come from a place other than our local governments,” Hill said.

In the meantime, Hansen said people in the community should reach out to politicians and agencies with their concerns.

“Folks just need to keep letting elected officials, government agencies know that they’re frustrated and that their health is being impacted by this problem, so that there’s a greater sense of urgency,” Hansen said.

GASP is a program sponsor on WBHM, but our news and business departments operate independently.