The 2022 moments that will stick with us: Reflections from the Gulf States Newsroom 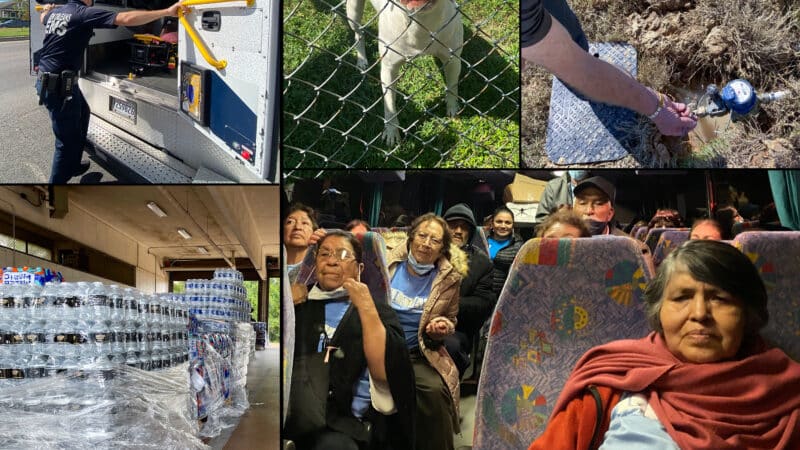 One of the hardest parts of being a radio reporter is getting stories to time. We haul out our microphones and recorders and spend hours in the field to make a story that’s just a few minutes long. There are so many moments — happy and sad, big and small — that end up on the cutting-room floor.

For the second year in a row, the Gulf States Newsroom is giving those hidden moments their time in the sun.

Here are some of the moments from 2022 that our reporters say they will always remember:

I have been working on a big investigative project over the last year about people from Cameroon who came to the U.S. to seek asylum and were detained in Louisiana and Mississippi. One of the people I interviewed was a former student named Fabrisk Bidpua. He was caught up in one of the major conflicts in Cameroon and fled to the U.S. to seek asylum. We talked so much about how he escaped and the abuses that he says he faced while in detention. But we also talked about how much he missed home. I could tell that he has so much pride for his country and that if it weren’t for this crisis, that he wouldn’t have left. He told me that when he was a student in Cameroon, he and his friends were always traveling, visiting beaches, or going to a mountain just to sit and talk. One of the things he told me that has stuck with me is that he would choose Cameroon “100 times” if someone asked him where he wanted to be. It really shows you more about the immigrant identity. As someone who’s really focused on immigration justice in my reporting, I’m really looking forward to sharing more stories that show the full picture of what it’s like to be an immigrant in the United States.

In November, I went to Alabaster, Alabama, to cover this program that reunites people who immigrated here to America with their parents they left behind in Mexico. So a lot of these people who immigrated here haven’t seen their parents in decades. And while I was at the event, I talked to two cousins and they were waiting with their family to greet their grandmothers. I was just talking to them about what activities they had planned for their grandmas during their stay here. They talked about taking them to Chattanooga, Tennessee, to see snow and to the aquarium close to Atlanta, Georgia. It was very intimate — a lot of people were crying. People were crying tears of joy.

I can’t relate to that. The furthest I’ve been for my family in South Carolina is here in Birmingham. But, like, I still call my mom every day. I still go home all the time. I can’t imagine what it’s like not to talk to your mom or your dad for, like, even a day. What I’m looking forward to next year is being welcomed in more spaces where people trust me to tell their stories.

A beautiful moment during an unexpected labor

I was doing a ride-along with paramedics and I didn’t really know what to expect. There was a call for a woman who was in labor. This patient, Allaina Jefferson, was seeing a nurse practitioner at this community health center and walked in thinking she was just going to have another primary care visit. And then all of a sudden she was in labor and the baby was breech and she was having a lot of pain and they had to call an ambulance to come and pick her up.

She was in pain. She was confused. She was excited. She was nervous. There were so many emotions that were going on in that room and it was just such a beautiful moment. They were singing a song to her, trying to make her laugh. She was laughing and crying at the same time. It was really, really beautiful and kind of honestly, one of the most exciting reporting experiences I’ve ever had.

As I go forward in 2023, I’m most excited to do more reporting on health care infrastructure across the Gulf South. We still are reeling from the impacts of COVID 19. I’m really interested as a reporter to unpack all of those different ways in which health care has changed.

‘People were just used to it’

At the tail end of the summer, I was sent to Jackson, Mississippi, to cover the water crisis. Most, if not all, the city was without clean water for seven weeks. And I’m going around with this photographer and the Salvation Army as they’re dropping off these pallets of bottled water at different places. And I end up meeting this guy named Chris Bonham. And he said the thing that really stuck with me most because of how absurd it was. He lives in Byram, which gets its water from Jackson. And despite 30 days under a boil water notice, he was still drinking the water until two days before we spoke. He just was so apathetic by this point because Jackson has had boil water notices for decades. This thing that the rest of the country viewed as insane — unsafe drinking water — people were just used to it, to the point where they were ignoring it.

I think this really kind of captured the apathy toward things like this terrible water crisis. So for 2023, I want to be doing more stories where I point out these absurd things that we’ve grown used to living with and how we shouldn’t be accepting them.

One of the things about the Jackson water crisis is that it doesn’t just affect Jackson. I did a story about the nearby town of Byram, one of those places that buys water from Jackson and a small part gets their water from Jackson’s treatment plants. So that means the boil water notices impact them too. I went to Byram’s monthly coffee with the mayor back in October. Mayor Richard White and some of the citizens were talking about breaking off and having their own water system. Something like that would have a pretty big price tag. The mayor’s number was about $26 million. The Byram Chamber of Commerce executive director Mary Ruth Kent asked, “How much of that money do we have?” And the mayor is pretty clear and says, “Uh, none!” And you kind of hear the room laughing and the mayor joking about it.

This moment stuck with me because I liked how indicative it is of small-town relationships, the casualness that comes with interacting with the elected officials. I look forward to exploring more stories of how environmental justice issues show up in rural and small towns in the South and highlighting the ways people want to fix their communities despite that.

They brought me in

I was covering the Jackson water crisis and this one house had this big blue tent on their front lawn. Everyone’s like, “Hey, how you doing?” This dog starts barking at me, and she’s just barking very ferociously, but I can tell that she’s trying to be my friend, because I’m like a dog whisperer. We shake hands and they bring me under the tent, and we just start talking.

As a journalist walking up on a group of people, usually you think that they’re going to be nervous to talk to you. And they sort of brought me in, and it reminded me a lot of my family and the porches that I sat on when I was a kid. What I’m looking forward to in 2023 is meeting more people who made a way when there wasn’t one.