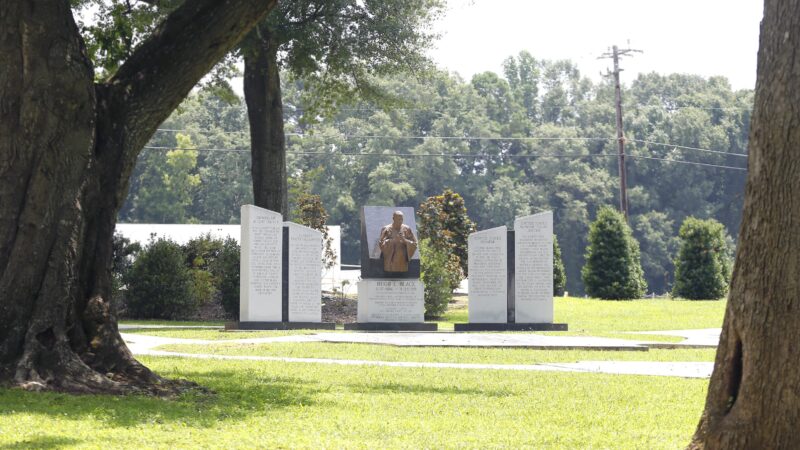 The Alabama Supreme Court Justice Hugo Black will be honored with a monument and park in Ashland, Alabama on October 15, 2022.

Courtesy of the Hugo Black Fund

On Saturday, a U.S. Supreme Court justice will finally be memorialized near his hometown in Ashland, Alabama.

As a former member of the Ku Klux Klan who later fought for racial justice, Justice Hugo Black has a complicated legacy.

The Gulf States Newsroom’s Taylor Washington sat down with Black’s biographer, Steve Suitts, to talk about his life and career.

Click the audio player above to listen to Washington’s and Suitt’s conversation. The following transcription has been edited for clarity.

Since you wrote the book on Hugo Black, would you mind telling us briefly about who he was?

Justice Black was a member of the United States Supreme Court for 34 years. Before that, he grew up in Alabama, in Clay County, and went to the University of Alabama Law School. In 1908, he moved to Birmingham, where he became a plaintiff’s lawyer representing poor African-American and white workers who were in mines or in the industries in Birmingham. And then in 1926, he ran for the United States Senate and was elected by the people of Alabama. Actually, at that time, only the white people of Alabama, because the disfranchisement was still the rule. And so he served in the United States Senate for almost two terms before Franklin Delano Roosevelt appointed him to the U.S. Supreme Court. So he actually is the only Alabamian ever born and reared in the state who held a national office established by the United States Constitution.

So, he was a Senator and a Justice and also, for a brief time, he was a member of the KKK. Would you mind saying how and when that happened and how it affected his career?

Well, I’ll give you a little background on it, if you bear with me. In 1920-21, Alabama had a major labor strike by the United Mine Workers of Alabama. It was a very large mine because of the extensive mining operations around Jefferson County. And Hugo Black represented the United Mine Workers in that strike. The UMW, as it was called, was in fact the only interracial organization among common people in Alabama at that time.

And this was during, of course, the era of Jim Crow segregation and injustice. Black represented the union, which had endorsed the right of all persons, regardless of race to vote. And it was about the only organization in which Blacks and whites were working together. The organization had Black officers and white officers, and the Blacks and whites elected those folks as their representatives.

So Black had a history in Jim Crow, Alabama, of fighting for those who, in fact, were struggling to change the racial injustice of the state. He also at that time was — and during the time in which he became a Klansman — he was trying to get rid of the convict lease system in Alabama. Well, the convict lease system was probably the nearest thing to slavery Alabama had. It essentially sent mostly Black men into the mines leased by the state after they were convicted, often on parole for minor crimes or in trials in which they were not represented well. They went into the mines and when they got to the mines, being leased convicts, they had a life expectancy of seven years. It was so dangerous that they were not liable to live for more than seven years and many were injured and did die.

Well, Black was fighting the convict lease system — both as the head of the statewide organization that was trying to get the legislature to end it, and he was fighting it in court. In fact, he went to the U.S. Supreme Court on behalf of a convict miner and it was the only case he ever argued as a lawyer. While that was going on, the miners’ strike ended because the owners played what we would today call “the race card.” They accused the miners of trying to promote social equality, that they were in fact elevating Black folks above their station, that they were after interracial marriage. They wanted the vote, and in the community in Birmingham — the white community — turned against them.

Well, all of that happened in the months before Hugo Black joined the Klan. And the simplest way I can explain it is that once the industrialists in Alabama took over, defeated the strike, defeated the unions, they blackballed all the union members so that most of them could not find any jobs and they had to move out of state. Once that happened, Hugo Black wanted to find a way in which the industrialists could not control the politics of Alabama, as they now were controlling the economy of Alabama. And he made a very hazardous moral decision. He joined the Klan.

And the Klan was, in fact, an organization that one student of Alabama called an underground union. It was anti-black, it was anti-Catholic, it was anti-Jewish. And Black was really none of those. But he decided that he needed to join. And he later explained that he thought it was important because every other lawyer was joining the Klan and he wanted his clients to have a fair chance. But I think ultimately you have to come to this understanding, and that is that given what he was trying to do, he generally held for all his life. And you can read his opinions in the Supreme Court in the 1950s when he was hailed by everyone, all liberals, for opposing putting people in jail simply because they belonged to the wrong party. Some were put in jail because they were members of the Communist Party or the Socialist Party.

He always believed that you should judge a person by what they do and what they say, not who they associate with. It was a dangerous moral decision, but he was willing to make those kinds of decisions, and I think he was a member for 22 months of the Klan. But no one has ever produced a record of his ever having said or done anything as a member of the Klan which indicated that he, in fact, endorsed all their anti-Black, anti-Jewish and anti-Catholic views. In fact, you know, as a lawyer, he generally dealt with the jurors who probably were, in most cases, anti-Black. Anti-Jewish and anti-Catholic. And in his mind, I think you could say he was thinking that the Klan was a jury of 12 men who he tried to argue before every week.

Later in his life, he became known for supporting civil rights. Would you mind talking about how his past may have played a role in his future decisions on the court?

Yeah, well, I think Hugo Black actually developed his sense of racial justice from his years in Alabama. And people mistake, I think, his 22 months in the Klan as being an indication that, in fact, what he did in Alabama was what was represented by the Klan as an organization. And that’s just not the case.

He was a leading proponent of the equal protection of the Reconstruction, the Fourteenth Amendment. He then joined and pushed for Brown v. Board of Education, which outlawed segregation in the public schools and later in all public facilities across the nation. He was, early on, the court’s most vocal advocate for ensuring that low-income, poor, white and Black defendants were given a fair trial, that they were not subjected to punishment which may have forced a conversion. He believed that everybody who was charged with a serious crime had, by the Constitution, a right to a lawyer — which was not established until the 1960s — in an opinion he wrote. And Black’s major influence on the body of constitutional law was that he not only helped the court enforce the equal protection clause of the Fourteenth Amendment, but he also said that all of our federal Bill of Rights … governed not just the federal government, but what people in the state government and the local governments did. And before he got on the court, that was not the case. In fact, the local sheriffs or state officials weren’t governed by the Bill of Rights generally before his opinions became a majority opinion on the Supreme Court.

But his notion of racial justice was, I think, grown and borne almost entirely during his time in Alabama. He didn’t talk about racial justice, but he did talk about that old Jeffersonian notion of equal justice to all, special privilege to none. And if you look at the whole of his life in Alabama before he went to Washington, you’ll see that that’s exactly what he generally did in the courtroom, and the public opinions, and in every public aspect of his life, and as a prosecutor and as a city judge.

What role should his past play in how we view his legacy as a whole?

I think that’s a good question. I think, well, what I hope Alabamians and other Southerners come to realize, is that this man — after Brown v. Board of Education — probably became the most hated white man in the South because he was willing to outlaw segregation. But this man did not really change his views once he went all out on the other side of the Mason-Dixon line. What he did was, he took his Alabama-born notions of equal justice to all, and he carried them with him to the Supreme Court. And it was that general framework and his self-education about the Constitution, and how it was developed and what it meant that gave us the kind of the judicial revolution that we now live in. What I call a constitutional America, where it doesn’t matter what race or place, what religion you are — the Bill of Rights protects you. And, the Fourteenth Amendment guarantees that the government will treat everyone with equal protection. And that was not the case when he was in Alabama. It was not the case when he went to Washington. But it is the case today, in large part, because of those Alabama-born values that he took to the north.

This weekend he’ll be honored with a monument in his hometown park, in Ashland, Alabama. Why do you think it has taken this long for him to be recognized in this kind of way?

Well, I think the reason it’s been so long is that he was seen as a traitor to his own people — to the white people of Alabama and the South. And I think it’s taken this long for the public and for public opinion to realize that, first of all, segregation was an abomination. It was dead wrong as he had said and as he ruled. And, I think that it’s because he’s generally viewed as a liberal and liberalism isn’t a very strong school of thought in Alabama or the South.