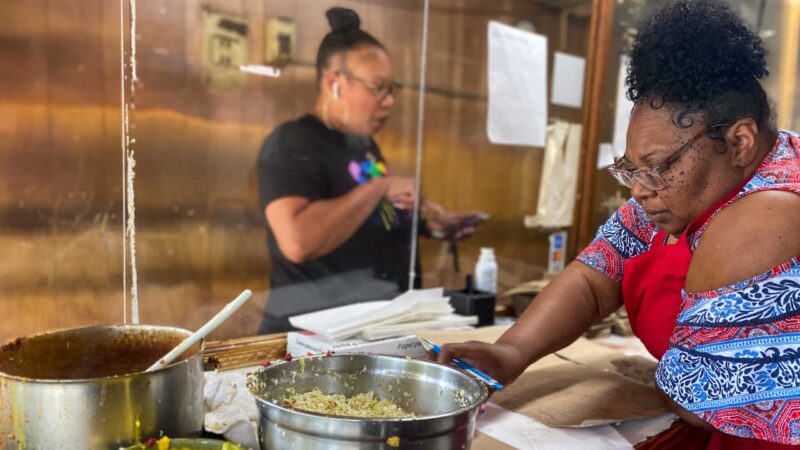 Lavette Mack, a veteran line-cook at Big Apple Inn in Jackson, Mississippi, has been tossing those famous sliders on the grill for over two decades, June 10, 2022.

The meaty, buttery smell emanating from Jackson, Mississippi’s oldest restaurant is hard to miss — and for many here — hard to resist. Big Apple Inn, which opened in the 1930s, is still one of the most popular sites on the historic Farish Street downtown.

To this day, lunch hour invites a long line of patrons to eagerly wait for the mustardy beef sliders, fatty smoked sausage, and famously chewy pig ear sandwiches. But despite its popularity, this establishment’s surroundings have been bleak for decades.

The district was once known as a major center of Black-owned business, community, and culture in the deep South. After segregation ended in the 1960s, nearly all of the shops, theaters and services once surrounding Big Apple Inn shuttered. The buildings crumbled and were overrun with grass and dirt.

For so long, many in the community have seen Farish Street as a failed business district. But now, Black business owners are trying to shift that narrative by investing in this street and proving that this historical center of commerce is not just a relic of the past.

Big Apple Inn is an example of Black history that owners in the historic district are striving to preserve for the community.

“We’re still going strong with the same five items on our menu that we started off with 83 years ago,” said owner Geno Lee. He can be found doing prep work in the back of the restaurant, which involves a lot of pressure-cooking and slicing pig ears.

Back in the day, Big Apple Inn was the spot where people organized during the civil rights movement and where everyone — from low-wage workers to lawyers of color — could gather for a hearty, affordable meal. Famous organizer and leader Medgar Evers — the first NAACP field officer in Mississippi — rented an office above the restaurant. The restaurant was also surrounded by Black-owned furniture stores, live music venues and a movie theater.

But this street, built and sustained by the concentration of Jackson’s limited Black wealth, started declining when segregation ended. White flight from the city played a role in that decline, but so did competition from white-owned businesses.

“Integration was great for the Black race, but it was terrible for the Black businessman,” Lee said. “When we were allowed to go to the white establishment to eat and trade, we stopped going on our own.”

Despite the hardships, the Big Apple Inn decided to stay.

“We are a niche market with no competition…Could we make more money in the suburbs? There’s no question,” Lee said. “[But] this is not just a street, it’s a historic district.”

Farish Street being so historically important to Mississippi’s Black community has not only convinced businesses to stay, but also attracted a new generation of entrepreneurs. John Tierre is one businessman who has proven it’s possible to start a new establishment on the street and make a profit by remodeling existing, historic buildings.

Tierre opened Johnny T’s Bistro and Blues about seven years ago as a restaurant during the day, a music venue at night and a nightclub on the weekends.

The two-story building has a history as an iconic club, once known as the Crystal Palace, that drew talent like Sammy Davis Jr. and comedian Red Foxx in the 1950s. Tierre used to come to the club while he was a student at Jackson State University, but it wasn’t known as a safe area in town.

Tierre said that, over time, the building’s reputation declined. But since he took over, his business has helped it rebound.

“I’ll let you in on a secret. This building here, prior to me, probably had the worst stigma in the city,” Tierre said. “I had a vision… even during COVID when people went out of business, every year our numbers are up.”

Before opening, Tierre spent two years fixing the building. The downstairs, unused by the previous owner, became a bistro — serving pan-seared tilapia and salmon croquettes with its walls adorned with murals of famous Black musicians and leaders. The upstairs turned into the Renaissance Room — a place for comedy shows, fundraisers and dance parties on Friday and Saturday nights. The shelves behind the bar are well stocked with liquor and sleek lounge furniture completes its sophisticated look.

“Sometimes that’s a shock, too,” Tierre said. “For someone that drives down the street, and then they come inside. They find out that you had this wide range of spirits. I mean, we got bottles that cost [as much as] $6,000.”

Despite Tierre’s success with Johnny T’s, Farish Street is still relatively underdeveloped. The south side of the street has boarded-up buildings and shattered windows. Collapsed walls reveal interiors reclaimed by weeds. And while the north end has seen more development, many of its buildings remain neglected.

Tierre said his business is not that easy to replicate, because it costs a lot of money to make those old buildings business ready. But there are others who are willing to take that chance.

Yasmin Gabriel Collins and her husband, Eric Collins, settled their business here because they believe the community appreciates them investing in the present and future of this street.

Collins admits to being skeptical when they first opened, as the concept is not the type of business people expect to see in a predominantly Black community.

“We’re changing that narrative, that this space is only for rich, white individuals that can eat healthy,” Gabriel Collins said. “Our ancestors for a long time were in charge of their care when they were enslaved. We forgot that narrative.”

Gabriel Collins now believes the vegan cafe and health food store make sense on Farish Street because there’s a sense of divine spirituality here. She and her husband are also working to build on their success by opening up a grocery store, something missing from Farish Street and largely lacking in downtown Jackson.