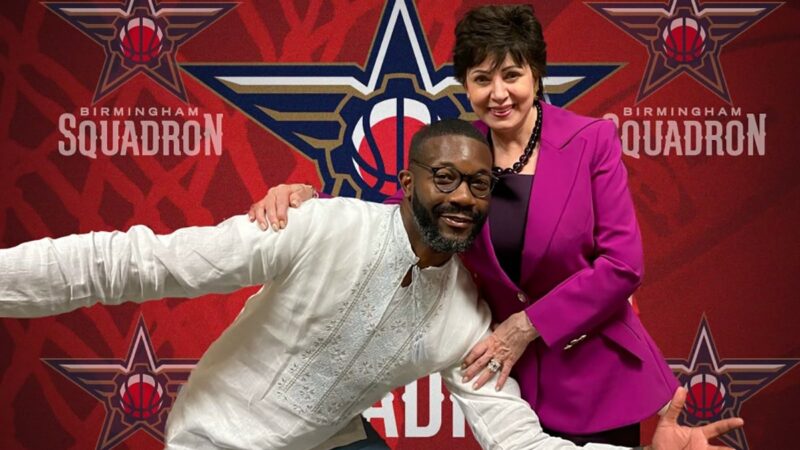 Zion Williamson, Brandon Ingram and the rest of the New Orleans Pelicans will take on Trae Young and the Atlanta Hawks Friday at 7 p.m. in a highly-anticipated home preseason matchup taking place in Birmingham, Alabama — not New Orleans.

The game’s location more than 300 miles away from the Pelicans’ home nest is the result of the team’s partnership with the Birmingham Squadron, its NBA G League affiliate, who played their first season in the Magic City last year. The name ‘Squadron’ comes from the term to describe a flock of pelicans and it also serves as an homage to Alabama’s military aviation history, like the Tuskegee Airmen.

Legacy Arena, which recently underwent a $125 million renovation, will host the game — giving fans who regularly attend Squadron home games a rare chance to see a professional team in action.

Christian Clark, who covers the Pelicans for NOLA.com, said the renovation of Legacy Arena makes Birmingham a more attractive site for an NBA game like this — the first the city has hosted since 2018.

“There’s been some serious investment into making [Legacy Arena] a good place to see a game,” Clark said.
He also said the Pelicans playing a preseason game in Birmingham is a good sign that they’re looking to grow their fan base in the city and compete for fans in the region.

The game is officially sold out as of Thursday evening. Clark said that it’s rare to sell out a regular season game, let alone a preseason game.

The game is just the latest in a series of moves that have raised the city’s profile as a hub for minor league sports, and Leslie Claybrook, the Squadron’s general manager, said that this game will only strengthen Birmingham’s visibility in the world of minor league sports.

Birmingham is already home to the Bulls in the Southern Professional Hockey League, Legion FC in the USL Championship soccer league and the Barons — the Double-A minor league baseball team for the MLB’s Chicago White Sox best known for the time hall of fame basketball player Michael Jordan played for them in the ‘90s.

There’s also the Stallions, the reigning champions of the United States Football League — which held its first season since 1985 this spring and played all of the league’s regular season games in Birmingham at Protective Stadium and Legion Field.

The Sports Business Journal study did not mention the Squadron in its rankings, and also said the city has the potential to move into the top 10 by 2023.

Community support is vital to reaching that benchmark. That’s where Ruben Perez, the city’s commissioner for sports and entertainment, comes in.

When people outside of the state think of sports in Alabama, not much comes to mind other than the Crimson Tide football team. That’s probably because of the state’s lack of any professional team above the minor league level.

Perez, however, doesn’t view that as a bad thing.

“It doesn’t have to be pro to get fan involvement or even be in the community and let people see [that] we have a lot that other cities don’t have,” he said

Perez also points to one benefit that minor league teams have over pro teams — the ability to see your favorite players up close and more often.

“The people that got to see Jordan play in Birmingham. The people of Chicago probably only got to see him play one time. People in Birmingham probably went to go see Jordan more than that,” he said.
Claybrook said she has big dreams for the future of the Squadron, and it all starts with building off of Friday’s game.

Before the Pelicans-Hawks game, the Squadron will get full attention at the team’s tip-off party from 4-6:30 p.m. outside of Legacy Arena and spilling into City Walk.

“I want Birmingham to be the basketball capital of the South,” she said. “I need the community Mayor Woodfin, Birmingham City Council, all of our fans, and even the state to embrace that concept.”

Woodfin, who’s known to attend most of the major sporting events in the city, met with Benson on Sept. 23 to further promote the game.

Shout out to Mrs. Benson, owner of @PelicansNBA and @GleagueSquadron, for hanging with us in Birmingham yesterday.

Come through for some NBA preseason action at Legacy Arena Oct. 14 when the Pelicans meet the Atlanta Hawks. Tix: https://t.co/L4t5VXT3eL pic.twitter.com/5T5mmGsNcC

When the game was first announced in June, Benson said Friday’s game is a tangible example of the Pelicans organization’s promise to invest in the Birmingham community and the fans living there. She also said it’s “just the beginning,” hinting at more initiatives to come.

Many, like Perez, see this as a hint that Friday won’t be the last time the Pelicans call Legacy Arena a temporary home.

“I think that’s an every year thing that they would do — having a preseason game here,” he said. “A lot of times, the NBA doesn’t move their regular season games anywhere. So, preseason-wise, I think we can continue that happening every year.”