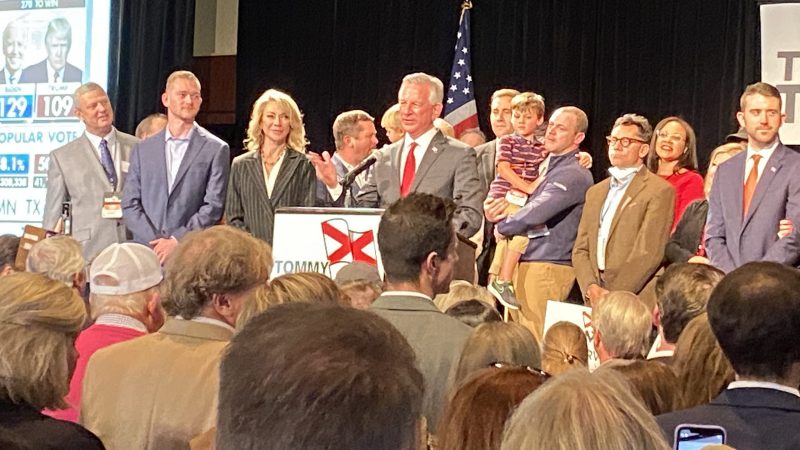 Alabama voters have elected Republican candidate Tommy Tuberville as the state’s next U.S. Senator. Voters turned out Tuesday, in what state and local officials estimated would be record numbers.

At 9:24 p.m. CT, The Associated Press declared Tuberville the winner with nearly 63% of the vote, defeating incumbent Democrat Doug Jones.

Tuberville, a former head football coach for Auburn University, had easily defeated the seat’s previous occupant, Jeff Sessions, in July’s Republican runoff. From there, he shifted to a minimalist campaign approach, eschewing debates and mostly avoiding public and media appearances, counting on his name recognition and Alabama’s deep-rooted conservative politics to push him to victory.

Even in the primary, his campaign was painted in broad strokes. Tuberville portrayed himself as a loyalist to President Donald Trump, echoing his promises to “drain the swamp” – i.e., remove corruption from Washington — and to “build the wall” along America’s border with Mexico. When he appeared onstage Tuesday night to give his acceptance speech, he promised supporters that his first term as senator would “be guided by our shared values, conservative values, and I will vote for the majority people of the state of Alabama and not for a party like Doug Jones did.”

In the final days of the campaign, Jones had urged supporters to “remember the feeling” of his 2017 victory, a late-breaking upset against former Alabama Supreme Court Chief Justice Roy Moore. It was a close race; even with the accusations of sexual misconduct that dogged Moore’s campaign, Jones won with 49.9% of the vote — only 30,000 votes more than Moore.

But that margin was enough to give Alabama its first Democratic senator in a quarter century, though the truncated term left open when Sessions resigned meant that Jones would have to replicate the upset just three years later.

He tried, pouring $9 million into a television advertising campaign attacking both Tuberville and Trump. He characterized Tuberville as an outsider who had moved back to Alabama only to run for office and accused him of having no plans or knowledge of the issues at stake.

Tuberville, meanwhile, attacked Jones for being “so extreme, he supports abortion up until birth” — a claim denied both by Jones and fact-checkers — and for being a “gun-grabber.” While Jones does support “red flag” laws and raising the minimum age to purchase some semi-automatic weapons to 21, he said he opposed gun confiscation and mandatory buyback programs. The two also clashed over the Affordable Care Act; Tuberville described it as a “failed experiment” and called for its repeal, while Jones emphasized its impact on otherwise uninsured Alabamians.

Jones’ overall voting record as senator placed him among the most moderate members of the Senate. But on the blockbuster issues —Trump’s impeachment trial, the nominations of Supreme Court Justices Brett Kavanaugh and Amy Coney Barrett, emergency funding for the border wall — Jones voted with the Democrats.

On Tuesday night, speaking at his election watch party in Birmingham, Jones admitted that Alabama “is still a work in progress.”

“At the end of the day, my time in the Senate is going to be over, but our time is just beginning — our time to make our state so much better than it has been,” he said.