Pregnant Women Are Changing Their Birth Plans Amid COVID-19 Fears 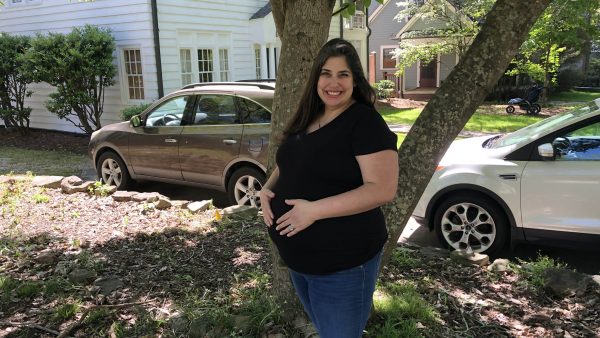 Almost 32 weeks pregnant, Veronica Wehby-Upchurch says COVID-19 has caused extra stress but she is adapting to the changes and staying positive.

Veronica Wehby-Upchurch and her husband tried to get pregnant for four years. After several rounds of infertility treatment and two miscarriages, Wehby-Upchurch is now almost 32 weeks along.

“I kind of have had a lot of anxiety this pregnancy anyway,” Weby-Upchurch says, “and then you know all of this stuff happened, and it’s like, ok so now it’s going to happen in the middle of just worldwide craziness and what does that really mean? What are the risks for me and what are the risks for the baby?”

For women who are pregnant, COVID-19 is causing stress on several different levels.

There is the general fear of getting the virus and potential complications during pregnancy. The Centers for Disease Control and Prevention (CDC) says it’s currently unclear how COVID-19 could affect pregnant women and their babies, but “based on available information, pregnant people seem to have the same risk as adults who are not pregnant.”

Dr. Jamie Routman, an obstetrician and gynecologist at Brookwood Baptist Medical Center, says there is also a lot of uncertainty for women preparing to give birth.

“I feel like over half of my OB patients that I’m talking to in clinic are in tears because they’re so afraid that their husbands are not going to be able to come and be with them in the hospital,” Routman says.

Due to the spread of coronavirus, hospitals across the country are limiting visitation for labor and delivery. Brookwood Baptist, along with UAB Hospital, allows one support partner to stay with a woman during and after birth. But some women want additional support.

Melissa Jackson is almost 37 weeks pregnant with her second child. She was planning to deliver in a hospital with both her husband and her doula, but now her doula can’t be there.

“That was one of the big reasons we decided to switch over to a home birth,” Jackson says.

Melissa Jackson recently changed her birth plan to deliver from home with a midwife.

She says she was already planning a natural birth without medication and she has always thought about having a home birth, so the transition has not been too stressful.

Jackson and her husband recently hired Rebekah Myrick, one of Alabama’s licensed professional midwives. Myrick, like many midwives across the country, says demand is high right now. In the past few weeks, she’s received over 20 phone calls from women interested in a home birth.

“And typically I receive less than 10 calls per month,” she says, “so this is a pretty significant increase.”

She says women are concerned about the infection risk at hospitals. They’re also worried about being temporarily separated from their babies if they’re suspected or confirmed to have COVID-19. The CDC recommends this to help prevent infecting the baby, stating that while it’s unlikely a baby will contract the coronavirus in utero, “a newborn is susceptible to person-to-person spread” after birth.

Myrick says many of the women who have recently called are in their second or third trimester. She normally begins working with a woman when she is around 10 weeks pregnant.

“I think there is a lot of emotional and mental processing that women have to go through when they switch so late in the game like this,” she says.

Not all women qualify for a home birth. The pregnancy must be low risk and the woman must not have certain pre-existing conditions.

Routman says she respects a woman’s decision to deliver at home, but she advises against it.

“I don’t think it’s a good idea, even during coronavirus times,” she says, “because you don’t know when you’re going to need these life saving interventions for you and your baby.”

She says she understands why people are frustrated with visitation restrictions, but it’s necessary to protect both patients and medical staff.

Wehby-Upchurch says she’s still going to deliver at the hospital. She is due June 4, and she hopes by then, her doula might be allowed to attend the birth.

In the meantime, Wehby-Upchurch is preparing for life after delivery. She and her husband canceled their baby shower, but they are already planning a blow-out first birthday party for their baby boy.