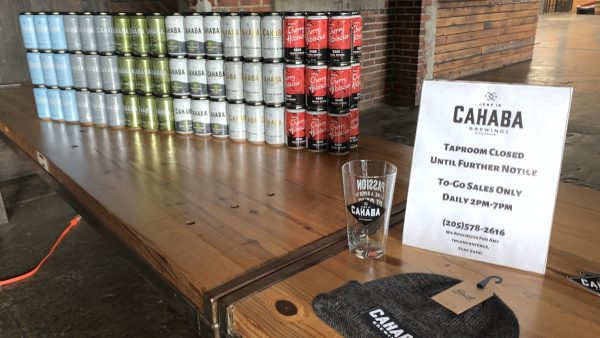 Beer is ready for pick-up at Cahaba Brewing Company.

The staff at Cahaba Brewing Company is pretty thin these days but the beer is still flowing. They’re canning a new seasonal beer: DD’s cherry hibiscus sour. But, like many bars and breweries in the state, Cahaba is temporarily closed. Eric Meyer is the founder and co-owner of Cahaba Brewing Company.

Since state officials put new restrictions in place for restaurants and bars, the east Avondale brewery has lost a lot of money.

“A good portion of our wholesale distribution is through keg beer,” he says. “Keg beer goes to restaurants and bars here locally and throughout the state of Alabama and all those places are now closed, too. So right now we are kegging absolutely nothing.”

Meyer has had to lay off his entire part-time staff. Other businesses have taken even more dramatic steps to manage the economic strain of the coronavirus pandemic.

Brio, a restaurant at Homewood’s Brookwood Village, also closed its doors for good, and Babalu, in Birmingham’s Lakeview district, permanently closed last week. Isaac Milhime was the kitchen manager there. He says he heard rumblings that the restaurant might close, but never heard anything official.

“They just deleted our Facebook page, they deleted us off the website,” he says. “And that was prior to them letting people know we were closing.”

Milhime says he received a termination letter a day later that said the restaurant was closing due in part to the coronavirus.

Bret Thorn is senior food editor for the industry publication Nation’s Restaurant News and also writes about coronavirus for NRN’s sister publication Restaurant Hospitality. He says it’s tough for restaurants to survive if they were already on shaky financial ground before the outbreak.

“Anytime there’s an economic downturn, restaurants that are not doing great financially are going to close anyway,” he says. “This is just something that’s part of the normal business cycle.”

But it isn’t normal for most restaurants to have to rely on take-out options alone. Thorn says that requires a different skill set and it’s a different business model—one that won’t necessarily work for everyone, he says.

“As a business owner, if I had no money and I had to take on debt to hopefully be open for a little bit longer, they’d be great,” he says. “But we don’t know where the end is. If I knew it was two weeks from now, I could prepare for that. But I don’t know if it’s two weeks from now or if it’s six months from now.”

Meyer says if restrictions remain in place, his brewery could survive at least 12 more weeks. But for him and other small business owners, he worries the end may be near.