Birmingham Gets Back to Distilling Liquor 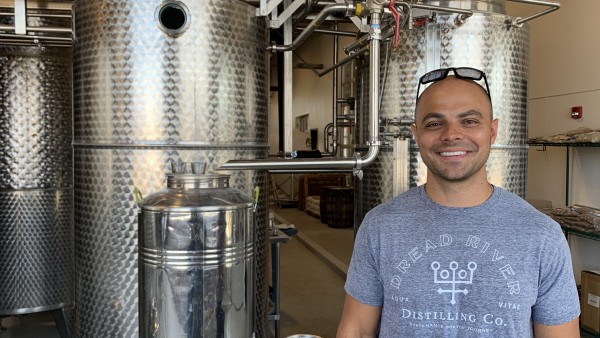 The number of distilleries across the U.S. is on the rise. There are more than 1,500 active distillers nationwide, according to the American Craft Spirits Association. It’s a trend credited, by some, to the influx of breweries — a wave the Birmingham area has caught up with in recent years. But when it comes to spirits, a couple distillers in Birmingham are already on board.

The first thing to hit your nose on a tour of Birmingham’s Dread River Distilling Co. is the sweet smell of wheat grain. Mash tanks clank as they break down grains, wheat, and enzymes.

That’s where the fermentation process begins, turning sugar into alcohol.

John Cubelic is co-founder of Dread River, where they distill whisky, vodka, gin and rum. They also make small batch wine and craft beer. The 24,000 square foot distillery is one of the largest in the state. Cubelic says when they started planning for Dread River three years ago, they wanted to bring something different to Birmingham’s food and beverage scene.

“Distilled spirits was a white space opportunity,” Cubelic says.  “No one had really taken that challenge on locally, and to this scale not in Alabama at all.”

In 2015, Redmont Distilling Co. became the first distillery in Birmingham since prohibition, according to the city. Redmont distilled its own vodka and gin until the end of 2017.  After a year-long hiatus, officials with Redmont recently announced they’re rebranding themselves with a new owner, former NBA and Auburn University basketball player Charles Barkley.

Distillation isn’t cheap. The founders of Dread River invested more than $3 million in the project, which offers a tasting room, kitchen and bar area with velvet couches.

“The distilled spirits industry supports about 8,400 jobs in the state of Alabama and contributes about $742 million to the state’s overall gross domestic product,” says Jeff Traywick, vice president for economic development at the Birmingham Business Alliance.

Traywick says beer brewers were the first in Alabama to push for easing of statewide alcohol restrictions and local breweries are now branching out into spirits.  When Ghost Train Brewing Company opened three years ago, the founders were completely focused on beer; they had no intention of distilling liquor.  But Will Crenshaw, Ghost Train’s director of operations, says they are now making their own vodka and gin.

“Distillation is a pretty small part of what we do, but we have some very well crafted cocktails on the menu,” Crenshaw says. “It’s a nice alternative for those who either have gluten sensitivities or just prefer spirits over beer.”

Crenshaw, who is also Ghost Train’s head distiller, says distilling liquor at a brewery isn’t far fetched. He says ingredients such as dry orange peel and coriander are already on hand for wheat beers. Their biggest challenge, he says, was packaging.

Ghost Train’s bottle design for their vodka and gin won a silver medal at the Denver International Spirits Competition.

“Getting bottles was the thing that took the most time,” Crenshaw says.

Ghost Train isn’t the only brewery riding the distillation wave. Ferus Ales will open in Trussville this month and plans to distill liquor in the near future.

Traywick sees at as the Birmingham area getting back to its roots.

“Our area’s got a pretty long ranging history not only with brewing, but also with distillation,” he says. “Jack Daniels even relocated their operations to Birmingham and distilled their product here from 1913 to 1915.”

Some people call the 1910’s “the good ol’ moonshine days.” In 1919, Congress passed the Volstead Act, which prohibited the sale of alcohol in the U.S.  The resurgence of distilleries in Alabama is another way the state is repeating its history, but unlike the early 20th century, many people aren’t complaining about it.