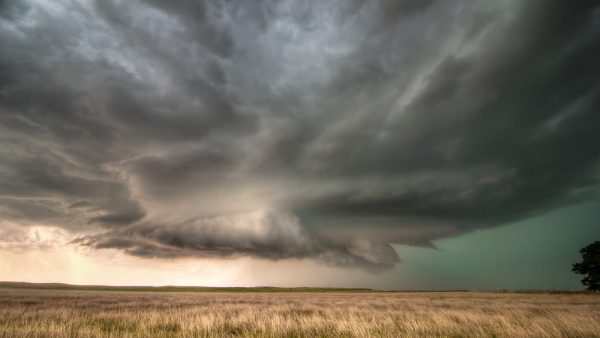 Supercell thunderstorms like this one in Texas are possible today in Alabama.

Update from National Weather Service, 5:45 pm: “A TORNADO WARNING REMAINS IN EFFECT UNTIL 600 PM CDT FOR SOUTHEASTERN COLBERT, NORTHEASTERN FRANKLIN, AND SOUTHWESTERN LAWRENCE COUNTIES.
At 5:42 PM CDT, a large and extremely dangerous tornado was located near Russellville, moving east at 35 mph. This is a PARTICULARLY DANGEROUS SITUATION. TAKE COVER NOW! … You are in a life-threatening situation. Flying debris may be deadly to those caught without shelter. Mobile homes will be destroyed. Considerable damage to homes, businesses, and vehicles is likely and complete destruction is possible. Locations impacted include Russellville, Littleville, Mt. Hope, La Grange, Tharptown, Smith, Rockwood, Landersville, Newburg and Hatton.

Update – 2:40 pm – Gov. Kay Ivey will give a news conference at 4 pm on the severe weather. A tornado watch is expected to be issued for northern Alabama later this afternoon.

Update – 1:35 pm – Quarter-sized hail, damaging winds to 60 mph and tornadoes will be possible this afternoon. Northeast Jefferson County is under a severe thunderstorm warning until 2:15 pm. Pea-sized hail has been reported in Sayre. Areas affected include Gardendale, Clay, Chalkville, and Argo. More thunderstorms expected tonight. Hail expected to be the size of tennis balls with possible winds up to 80 mph. Northern counties are expected to see the biggest impacts. Littleville in the Florence and Muscle Shoals area had the first tornado warning of the day. It expires at 2:15.

Update – 11:30 am – There’s a moderate risk for strong tornadoes and damaging winds up to 80 mph and tennis ball-sized hail. The biggest threat is late this evening and into the overnight hours, according to the latest forecast from the National Weather Service in Birmingham.

Two waves of severe weather are expected Monday around the state, including supercell thunderstorms, according to the Alabama Emergency Management Agency. “Supercells are the most violent of storms, and all modes of severe weather are possible, including a couple of strong to violent tornadoes, hail approaching baseball size, and non-tornadic wind gusts near or above 70 mph,” Jim Stefkovich, Alabama EMA meteorologist said.

Those storms are expected to hit from 2 to 6 pm. Severe weather isn’t a given, but if showers become thunderstorms, the atmosphere will become ripe for explosive supercells, Stefkovich says.

The second wave of storms, expected from 3 to 9 pm, brings the greatest risk of severe weather with supercells moving southeast throughout the state.

Emergency officials urge residents to prepare for potential dangerous weather. Some school systems and government offices throughout the state are closing early.

“The time for Alabama residents to prepare is now, while we never know exactly what the storms will bring, it it is important for citizens to know a potential threat exits,” Alabama EMA Director Brian E. Hastings said in a statement.