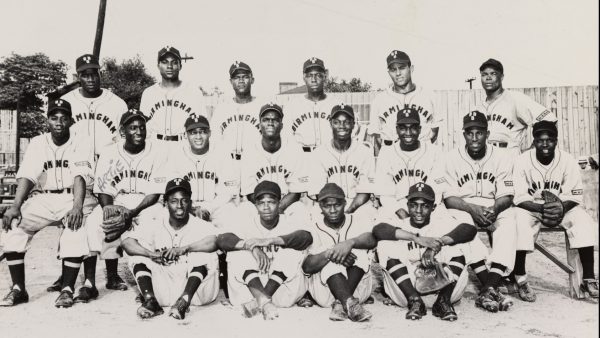 This week marks the 70th anniversary of the Birmingham Black Barons’ appearance in what would become the last Negro League World Series ever played. The 1948 team was considered the greatest Black Barons team of all-time and was made up of legends like Bill Greason. Greason was a pitcher who broke the color barrier with the Oklahoma City Indians and later played briefly in the Major League.  The 94-year-old tells WBHM’s Janae Pierre about that final Negro League World Series against the Washington Homestead Grays.

What do you remember most about that ’48 series?

“Well, it was a good series. The only thing was we didn’t play all the games in one place.  We went from one place to another. They beat us four games to one, and I won the only game here in Birmingham, in relief. Piper (team manager Lorenzo Piper Davis) used the other guys who were more seasoned. He was the one that brought me under control because when I came to Birmingham I was kind of fiery. I kept the Grays from scoring while I was in, and we happened to get the winning run when I was pitching in those times. That’s the way I won the game; not as a starter, but in a relief role.”

“Willie possessed what a whole lot of other players didn’t… natural ability. He could run, he could throw and he eventually learned how to hit. He had all the tools to become a major league ballplayer. He was a great soul and he was great at the age of just 18 or 19 years old. I was there (in Birmingham) when he came and we played there together.”

Did you know the ’48 season would be the last Negro League World Series?

“Not at that time. With Jackie Robinson being brought into the major leagues, they began looking at other negro ballplayers and they began to pull the players out. When that happened, the attendance began to drop and the league folded and only a few teams survived.”

Going from the baseball field to the pulpit:

“When I finished my baseball career I worked for a department store downtown.  They hired me at Pizitz.  I was not in the ministry then. My wife was a church goer. She was a member of 16th Street Baptist Church. The church was bombed and she persuaded me to start going to church and I did. I started going and pretty soon I became a member of 16th Street Baptist Church. The Sunday that it was bombed, I snuck off to go play baseball down in Tuscaloosa with the local team here. When that bomb went off, that’s when we reassembled and I could feel something unusual happening. God was saying to me, “Now it’s your time.  You gotta do what I want you to do.” And so I continued to be faithful and I’d go to prayer service and bible study. One Sunday something happened.  I threw up my hands and I said, “I’m ready Lord.” And from that time on I’ve been steadily going for it.”

Rev. Bill Greason is a former pitcher for the Birmingham Black Barons. The Black Barons appeared in the Negro League World Series seventy years ago this week.