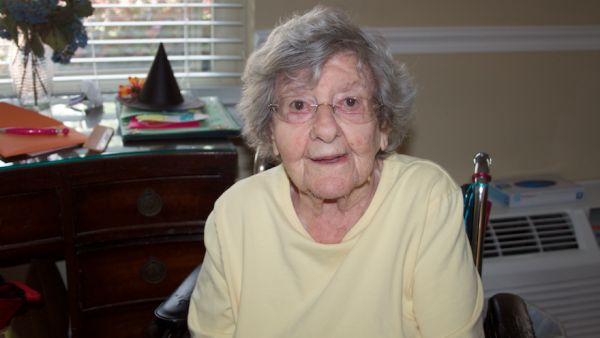 Dorothy Levy co-founded United Cerebral Palsy of Greater Birmingham nearly seven decades ago after her son was diagnosed with the disorder.

Dorothy Levy is still on a high after her birthday party last month. I met with her recently at the Greenbriar Assisted Living facility in Birmingham. As I walked into her room, family and friends shared laughs over a Facebook video of Levy dancing. In the video, she rolls her wheelchair back & forth, kicking her legs and bouncing her shoulders. Levy is active; just as her oldest son Harry was as a child.

“My Harry” she says, “he grew up to be a perfectly wonderful individual. He had cerebral palsy.”

Harry was born in 1938. Back then, doctors in the South didn’t know anything about cerebral palsy. She says doctors would say kids with the disorder were ruined.

“And during that time of raising this baby we didn’t know exactly whether his movements were wrong or not,” she says.

Levy recalls traveling to New York with Harry in the early 40s. While there, they worked with a physician who trained Harry’s doctor in Birmingham.

Levy’s daughter Janice says whatever Harry needed, her parents were there to make it happen.

“There was an organization called United Cerebral Palsy of Birmingham, and my mother and father were very active in getting it started,” Janice says.

Dorothy Levy and her children, Janice and Robert, in the dining hall at Greenbrier Assisted Living Facility in Birmingham.

The program is now called United Ability. Almost 70 years later, it continues to connect people with disabilities. Levy visits the center when she can.

“But I don’t do very much in the community now. I’m too old and decrepit,” she says.

Though she feels “decrepit,” Levy has enough energy for yet another birthday celebration.

“We should have a birthday party for somebody every month,” she says.

I joined her and the family in the Greenbriar dining area on a recent Friday night and we ate everything, from chips and guacamole to ribs and collard greens. That’s right, this 106 year old can still chow down on ribs.

“If you wanna eat ribs eat [them], they won’t hurt you. They’ll do you some good,” she says.

That’s exactly what we did, we ate ribs. And even though it’s a year out, Levy is already making plans for her 107th birthday.