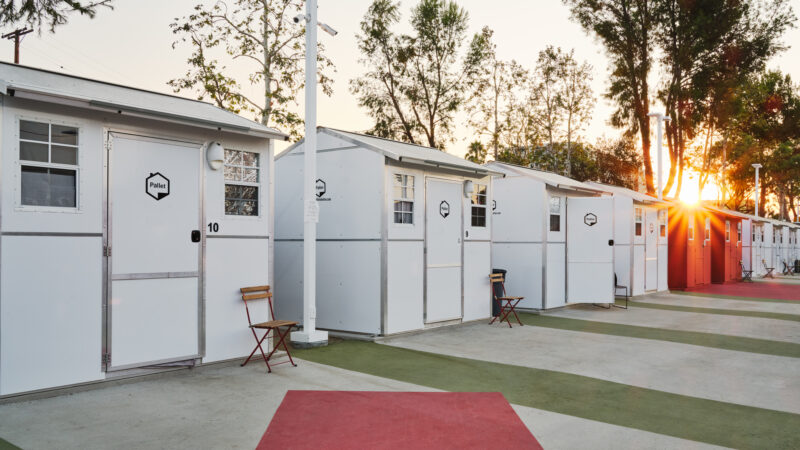 Pallet Shelter structures like those proposed for Birmingham are already used in other cities across the country.

The Birmingham City Council approved a $1 million pilot program on Tuesday that aims to reduce the number of people experiencing homelessness.

The funds will come from the federal Community Development Block Grants and will pay Pallet Shelter, a company dedicated to ending unsheltered homelessness and giving people a fair chance at employment.

The pilot program, the first of its kind in Alabama, centers around micro shelters from the company, which has built shelter villages for people experiencing homelessness across the country. The structures are tiny, with enough room for a bunk bed. They’ll have some storage for personal items and a cooling and heating system. In addition, the program would offer services such as mental healthcare and workforce development.

The city’s plan calls for Pallet Shelter to assemble up to 100 of these structures. A 2022 survey estimated almost 350 people are unhoused in Birmingham.

Meghan V. Thomas, the director of community development for the city of Birmingham, said the tiny buildings are an important step for those who have been living on the streets and may not be ready to jump straight to a house or apartment.

“Research out there tells us that a lot of people are not immediately prepared to move into traditional housing,” Thomas said. “They need opportunities to build their confidence in spaces, to build security, to start even feeling safe within a space on their own.”

This is not the first time community leaders have tried to launch a micro shelter initiative. Last summer, just before The World Games, several nonprofits tried to build wooden shelters for unhoused people. Initially, officials with The Games said they would build 60 micro shelters, but only five or six were completed. Those original wooden shelters didn’t have AC, heating systems or anything that resembled comfortable sleeping pallets.

“One thing that we’ve learned is that people experiencing homelessness are excited about micro sheltering,” says Anne Rygiel, CEO of Firehouse Ministries, which serves chronically homeless men. “We know that because we did over a hundred interviews with currently homeless individuals.”

Mayor Randall Woodfin made it clear that this initiative won’t end homelessness.

“We do believe we are in a position to serve those who experience homelessness. As well as to provide a way for permanent housing.”

The city has not selected any sites for these sleeping shelters, but they are accepting proposals from groups interested in helping with the pilot program through the end of the month.