An old school in Birmingham’s Bush Hills is now an urban farm. Residents are thinking bigger 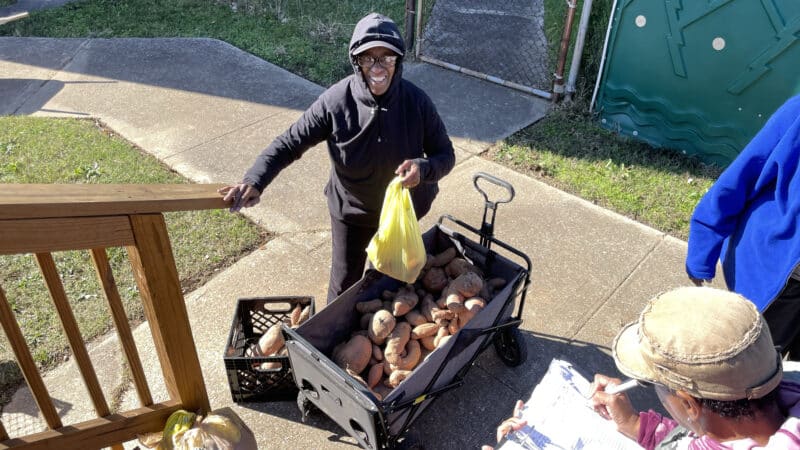 At west Birmingham’s old Woodrow Wilson Elementary School, on the near-four acres that were once the school’s grounds, area residents tend to their own small garden plots with all manner of fruits and vegetables. The potatoes, greens, squash and other produce raised here — as much as 50,000 pounds a year — are distributed within the community, free of charge.

What started as a means to prevent the old school from becoming a blight on the neighborhood is now the Bush Hills Community Garden and Urban Farm. Located about a mile from Legion Field, plans are underway for more than just agriculture. Some residents believe it is a model for other projects that adapt existing structures to the needs of their surrounding communities.

The roots for the garden and farm go back to 2017.

“That’s when we asked Birmingham City Schools for permission to do something with the old elementary school property,” explained Walladean Streeter, president of the Bush Hills Neighborhood Association.

The school closed in 2008, after serving the community for eight decades. After that, it was broken into on numerous occasions and materials from the site were stolen.

Some area residents worried the vacant building was becoming a risk to the neighborhood. They also saw opportunity. BCS gave the group and its new nonprofit organization, Bush Hills Connections, a 50-year lease on the property.

In addition, the group applied for and received U.S. Department of Agriculture certification, as well as rezoning from the city of Birmingham, that allowed the property to be designated an official urban farm. With a few small grants and borrowed farm equipment, Bush Hills Connections planted their first crops in 2018.

While only employees and a few select volunteers work on the actual urban farm, area residents wanting to tend their own small gardens can do so on the community garden side of the property. There, they grow fruits, vegetables and flowers, as well as work on other projects such as a goldfish pond.

Streeter says one of the first ideas for how to adapt the old school grounds was to use it to grow fresh produce for the neighborhood.

“We have to make sure we get all the vegetables we need, because we are in a food desert,” she said. “So now, we know that we can eat healthy.”

Streeter pointed out there are no grocery stores within the neighborhood itself. Also, fresh produce can be more expensive than many area residents can afford on a regular basis.

“A source for that fresh, healthy food right here is so important,” she said. “And now with our hoop house we can grow food all year.”

The hoop house is a large enclosure where plants are grown inside and protected from the elements, especially in colder months. Since opening, the operation has also hired a farm manager to oversee the near-constant work required to grow crops year-round.

Whenever produce is harvested, neighborhood residents are contacted via social media, phone and even person-to-person. Community members are allowed to get what they need for personal use and sometimes a bit more.

During the recent holidays, Yvette Jones grabbed a little extra. She was helping prepare a Thanksgiving meal for all-comers, including those who couldn’t afford to cook for themselves.

The fact that the produce from Bush Hills is always free is a big plus, said Jones.

“They are homegrown. So that’s the best benefit of getting them from a garden,” Jones said.

She added the farm and the free food both represent Bush Hills.

“Our neighborhood likes to help … and take care of each other,” Jones said.

Jones also said the farm and garden are great ways to educate people about where food comes from.

“I brought my grandkids here to let them see how food is grown. It was really interesting for the kids to see it, too.”

Jennifer Duckworth homeschools her three children and uses the farm and garden as an open-air classroom to learn about agriculture and gardening. Alexander is her oldest child and is in sixth grade; Carleigh is in fourth; and Phoenix is in second.

On a recent visit, April Williams, a master gardener and part of the brain trust that came up with the idea for the garden and farm, helped the Duckworths transplant their Brussels sprouts that they grew from seedlings at home. She also told them about what was just harvested and what was to be planted next.

“There’s always something to do in the garden, right?” Williams asked. “Even if you aren’t harvesting, you’re preparing the soil for the next season.”

For the Duckworths, getting involved with the garden has offered benefits beyond just providing an open-air classroom.

“We’ve been doing this for two years,” Jennifer Duckworth said. “It’s completely changed our family’s life and the way we think about just our bodies and what we put into them, as opposed to just running to the grocery store and grabbing something off the shelves.”

“And I now like vegetables,” Carleigh said. “Before I didn’t. These are fresh and more filling … and delicious.”

After about four years in operation, the project is beginning a new phase. With help from corporate partners — architecture and engineering firm Goodwyn Mills Cawood, and construction firm BL Harbert — Bush Hills Connections is renovating the old school building itself, turning the former cafeteria into a teaching kitchen and the gym into a community center.

“Having this commissary kitchen will allow us to invite people in from Bush Hills and the surrounding community, and show them how to prepare food,” said Joanice Thompson, chair of Bush Hills Connections and a longtime resident of the neighborhood. “So many people today don’t know how to cook … because they live a fast-paced life.”

Thompson said the gym will give kids a place to play and learn.

“At the same time, it will not just focus on them coming in, playing basketball. We’re planning to have programs [dealing with] character building, violence prevention, safety, health.”

There’s also discussion about converting the old classrooms into loft apartments or condos, although those plans are still in the works.

“I would love to have a corner loft as I grow older and live in that building,” Thompson said. “And [the building] is large enough to create all of that.”

Thompson said the Bush Hills Community Garden and Urban Farm can serve as an example for similar projects.

“The model that we are building is a healthy, competitive Bush Hills,” Thompson said. “And we want that model to be a scalable model that can be used in any neighborhood.”

“The garden has given us this synergy,” Thompson said. “It’s a place that creates a sense of community.”

That’s an ingredient, Thompson said, that just about any neighborhood needs.