A Mississippi community is ‘grateful’ for more air testing, but skeptical of what comes next 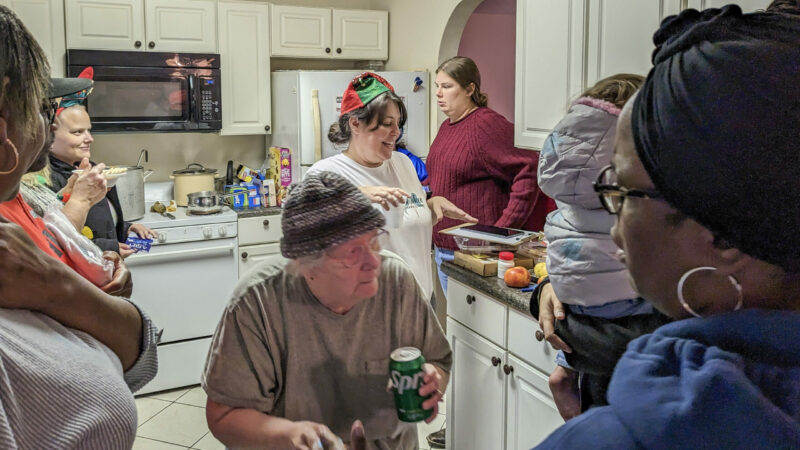 Residents in the Cherokee Forest neighborhood of Pascagoula, Mississippi, gather for a neighborhood party, December 17, 2022. While it was holiday-themed, the party’s true focus was to share a survey with residents for a community buyout program due to their neighborhood’s air pollution.

On the weekend before Christmas, Barbara Weckesser is hosting a Christmas party for the Cherokee Forest subdivision in Pascagoula, Mississippi.

This is not a typical holiday celebration, however. It’s also a meeting for Cherokee Concerned Citizens, Weckesser’s neighborhood environmental group. At this meeting, neighbors pile into her home to talk about what ties them all together besides a ZIP code: the air pollution they say is making them sick.

“We’ve continued to push and shove and try to show what industry is actually doing and how much it’s impacting our health,” Weckesser said.

Residents say these sites leave behind visible black dust from sandblasting and painting that they can see on their homes and vehicles. After years of submitting complaints to government officials, they decided to organize.

“I went around and I put little notes on my neighbors’ doors telling them ‘Come to my house, I’m having a meeting if you’re experiencing dust,’” Weckesser said.

Since organizing in 2013, Cherokee Concerned Citizens have been sounding the alarm about air pollution’s effect on the neighborhood. Weckesser said over 20 of her neighbors have died from cancer or other health issues over the years, which they think is a result of the pollution.

Residents have also complained of rashes, respiratory problems, migraines and itchiness. The more serious concerns are around the potential impacts of air pollution on their lungs, hearts, brain and nerves.

Last year, the Environmental Protection Agency (EPA) announced that the community will get $500,000 from the Biden Administration to measure the concentrations of the air pollutants that the Cherokee Forest community is most concerned about. The money is a slice of a total $53.4 million from both the Inflation Reduction Act and the American Rescue Plan.

But Weckesser and many of her neighbors have doubts.

“We’re grateful that we have a $500,000 grant to monitor [air pollution] in this neighborhood. But we’re skeptical about how it will be reported,” Weckesser said.

MDEQ, residents at odds over past testing

The distrust stems from residents’ previous efforts to get both state and federal environmental regulators to address this issue, but also because the funds went to the Mississippi Department of Environmental Quality (MDEQ) — which is responsible for permitting, compliance, and engaging the community and stakeholders on environmental issues.

The MDEQ has tested the air quality before, with its most recent effort being in 2016 and 2017. The agency collected at least five 24-hour samples of volatile organic compounds (VOC) and took an additional two 5-minute samples after a resident reported concerning air conditions or odors were occurring.

According to MDEQ, none of the samples showed concentrations of hazardous air pollutants that exceeded health thresholds. The EPA reviewed the data and was comfortable with it, said Chris Wells, MDEQ’s executive director.

“The way we analyzed that data and compared it to thresholds, we felt confident that it demonstrated that, at least for the pollutants that we sampled for work, showed no cause for concern,” Wells said.

While they knew some community members didn’t agree, MDEQ is confident in the previous data. But now, the EPA no longer agrees. The agency said previous collections did not provide enough data to be confident in the state’s results and suggested a longer term for monitoring.

The money from the grant will make a new air monitoring project possible, which MDEQ is in the early stages of its process to do so.

“We’re not going into this to disprove or to prove anything,” Wells said. “This is an objective effort to determine what, if anything, is going on down there in terms of air pollution.”

This time around, the state environmental agency plans to gather more samples, collected once every six days over the course of a year for a total of 61 samples. The pollutants they’ll be monitoring are particulate matter, methane, VOCs and reduced sulfur compounds like hydrogen sulfide (H2S).

All of those pollutants are the ones of greatest concern for the community, according to the Agency for Toxic Substances and Disease Registry (ATSDR) and an investigation by the National Enforcement Investigations Center (NEIC) of elevated readings for those pollutants. The health concerns related to each line up with citizen complaints, and the pollutants sampled are the most likely to be produced or present in the area given the types of industry in Pascagoula.

The EPA said these new air monitoring projects focus on underserved communities that are historically marginalized and overburdened by pollution. That includes the Gulf South.

Alabama is receiving nearly $450,000 to study the air in two Birmingham neighborhoods where industrial facilities are emitting pollutants in Black neighborhoods. Louisiana will receive well over $2 million to check air quality throughout the state. There, industrial pollution is causing higher cancer rates for Black and low-income residents.

The Mississippi agency is still waiting for those EPA funds to come through, but the goal is to hit the ground running once they do. The data will drive MDEQ’s next steps, Wells said.

“If the data tells us once again, as it has in the past, that the pollutants are below the health threshold, it is what it is,” Wells said. “If we collect this data and it shows that there is some cause for concern, we want to know that and we want to take appropriate action.”

Part of the plans for those early months is community engagement. MDEQ is partnering with the City of Pascagoula and Jackson County for the project. They’ll be helping get the local community and stakeholders involved, including the local industries. The city and county governments will help develop a list of potential sites to locate monitors.

Residents ‘need to be included, not excluded’

For one, she’s concerned that collecting samples every six days isn’t random enough to get an accurate test, since the surrounding industries will know what days to expect it. Her other concern is that environmental regulators and the government aren’t listening to Cherokee Forest residents when they tell them about the people in the neighborhood who died, and what caused it.

“The narrative of Pascagoula and the way they talk about this is like, you know, it’s a great place to live, industry’s so important, and so they never talk about the health impacts and the danger of living next to industry,” said Jennifer Crosslin, an organizer with Cherokee Concerned Citizens.

Crosslin doesn’t live in Cherokee, but the organization has become like family to her. She helped with one of the true goals of Weckesser’s Christmas party: sharing a survey with other residents to see who wants to move, in partnership with Buy-In Community Planning, which helps communities in flood-prone areas — like Pascagoula — access federal funding. The organization plans to use this designation to get Cherokee Forest residents the money they need to relocate.

Weckesser said relocation is the goal for the majority of residents since they feel the pollution is too serious to be remedied and industry in the area will most likely continue to grow.

The party also helps connect the dots for some Cherokee residents. For a few, it’s their first time hearing that nearby pollution might be making them sick.

“When you’re experiencing these things as individuals, you can write it off,” Crosslin said.

But bringing everyone together exposes a pattern — something Barbara Irvin learned 25 years ago when she moved to the Cherokee Forest community. Irvin said her family didn’t know all the facts about the pollution when they arrived. Soon, they were dealing with constant upper respiratory infections.

“We lived at the emergency room with the babies when they were growing up. And it makes you wonder, because this shouldn’t be happening — not like this,” Irvin said. “When you’ve got three or four homes in the same area and everybody’s having the same problems, something’s wrong.”

Irvin is the other Barbara in the group who’s fighting for answers. She thinks the air monitoring project will help their efforts, but she said it’s important that the neighborhood has its own representatives there so they can make their own decisions and observations.

Even as they remain hopeful about the new air monitoring project, the Cherokee Concerned Citizens won’t stop trying to get their own answers. As various neighbors trickle in throughout the party, the group makes plans to go door-to-door in pairs to give surveys to the ones who wouldn’t make it.

The goal is to complete the surveys by March when a lot of federal programs reopen, Crosslin said. Irvin said they’re looking for other grants and partnering with other organizations to do their own air testing.

“Bringing everyone in the community together and seeing everyone work together and sharing their stories and their frustrations and coming up with new ideas, it’s sort of recommits, this is worth doing,” Crosslin said. “Their lives are worth fighting for.”

This story was produced by the Gulf States Newsroom, a collaboration among Mississippi Public Broadcasting, WBHM in Alabama and WWNO and WRKFin Louisiana and NPR.