With vanpooling, workers and employers find a ‘win-win’ amid a tight labor market, high gas costs 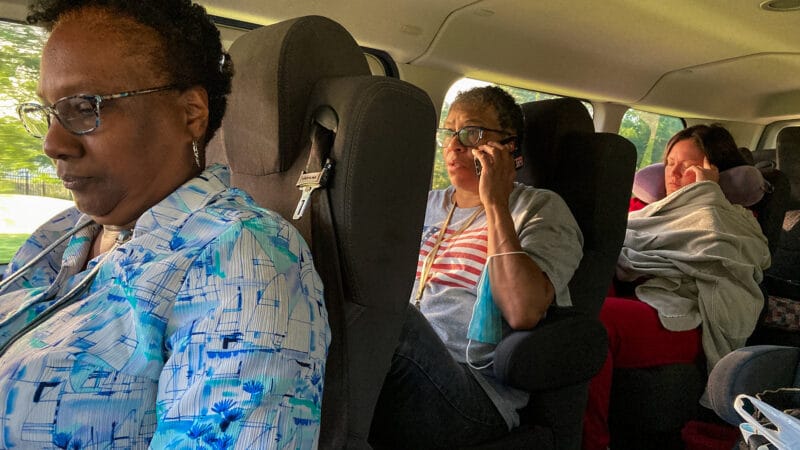 Lorrie Bowen, Tina Casey and Scarlet Cox ride in a Coast Commuter vanpool on their way to work at the Biloxi, Mississippi VA Medical Center, May 16, 2022.

Letting someone else take the wheel on a long commute comes with perks. Just ask the riders driving together from Mobile, Alabama to their jobs at the Biloxi VA Medical Center in Mississippi.

Lorrie Bowen scrolls through her iPhone. Scarlet Cox catches up on sleep. Tina Casey makes a call. Only two things are off limits — politics and religion.

“This is a nice hour drive but it can be a monster if you get into a heated argument and you get to work and you’re upset,” Bowen said.

These benefits come standard in a carpool, but the ride the three women are taking is a bit different — it’s a vanpool.

Vanpooling is carpooling’s dressed-up, corporate cousin. Co-workers rent a van from a company like Enterprise, usually in partnership with their employer and a local transit agency. Riders split the cost, sometimes while getting a subsidy — in this case, the VA covers the whole bill.

Like all mass transit, vanpooling ridership dipped during the COVID-19 pandemic’s early days. But 2022’s economic woes are causing it to have a big moment. Record gas prices make driving alone a hard to justify near-luxury. The tight labor market means employers want a new perk to offer that lets them recruit workers from further away.

“People are coming back to work and we’re seeing a real uptick,” Mike Mangan, the vice president for Enterprise’s Commute with Enterprise program. “We are pumping the gas right now.”

Vanpooling started in the 1970s alongside the carpooling heyday — another ride-sharing surge brought on by steep gas prices.

That’s when Kevin Coggin first got interested in the idea. Right out of high school, he carpooled with his buddies the roughly 45-minute drive from Biloxi to the Huntington Ingalls shipyard for work.

“The drive in the traffic — I mean come on,” Coggin said. “Why would you want to continue to do that if you had a choice not to?”

Decades later, the shipyard needed help after its workers were displaced by Hurricane Katrina. By then, Coggin was the head of Coast Transit Authority, which provides public transportation along Mississippi’s coast. He still had that carpooling experience in the back of his mind and knew this was his chance to give vanpooling a shot.

“I said, ‘Okay, well cool,’” Coggin said. “I get an opportunity to work with the single largest [manufacturing] employer in the state of Mississippi to get a vanpool going, which we always wanted to do.”

The program took off with roughly 15 vans taking workers to and from the shipyard. Eventually, more employers got involved, mostly on the federal side — the Mississippi National Guard, Stennis Space Center and a U.S. Navy base in Belle Chasse, Louisiana.

In the roughly 17 years since it started, the van fleet for Mississippi’s Coast Commuter program has seen its ups and downs, including a big drop during the pandemic. Coggin said the program had more than 50 vehicles at its peak, but that stock dwindled down to about 15. Enterprise also saw a significant drop in vanpools.

But vanpool ridership didn’t fall the same way it did for other forms of mass transit, like buses and rail. While those options still hang well below pre-pandemic ridership, Enterprise said its vanpooling program is quickly surging back— up more than 20% since last year.

Coggin’s program also saw a bump, with about one or two new vanpools being added each month.

From the employers, to the riders, to environmentalists hoping to see more cars off the road, vanpool advocates argue this type of ride-sharing benefits everyone involved.

Working with Enterprise gives Coggin’s small state transit agency access to the larger resources available to a private company like Enterprise. The company can obtain needed vehicles for Coggin that have been hard to find lately. When it was time to scale down during the pandemic, he didn’t have to worry about idling vehicles costing taxpayer dollars to maintain since they were owned and cared for by Enterprise.

“It’s a win-win, high-impact for everybody,” Coggin said.

For riders, vanpooling means avoiding those high-gas prices, or at least splitting them between other co-workers in the van. It also lets everyone but the driver do what they want on the trip, from chit-chatting to catching up on lost sleep.

On the employer side, it’s easier to recruit workers from far off when the long commute is less strenuous and less costly. This has been most impactful when recruiting workers in rural areas, some with no other way to get to the job site.

The Chamber of Commerce of West Alabama has been considering vanpooling to get workers to a Mercedes-Benz automobile manufacturing plant from places like Greene County in Alabama’s Black Belt, where many people lack access to a car.

“It is the most positive contribution and step in the right direction in this rural transportation conundrum that I’ve seen in a while,” Steve Jones, the director of the Transportation Policy Research Center for the University of Alabama, said.

For all of vanpooling’s benefits, several roadblocks still limit the service.

Enterprise believes there’s room for the number of vanpools to double or even triple over time. But even if that growth happens, the company still sees vanpools as a niche part of its business.

Getting a vanpool started requires multiple workers on the same shift coming from a similar direction — difficult when a business employs hundreds of workers spread out over the region. It’s nearly impossible for a small mom-and-pop to pull off when there are only a few workers taking a ride.

Then, there’s car culture. While the high prices at the pump might have some Americans ready to share a commute, vanpooling advocates admit it’s hard to get people to give up their car while at work, even when agencies offer free rides for those emergencies that require the flexibility that ride-sharing lacks.

The biggest challenge, though, is finding drivers. Just like with owning their own vehicle, drivers take on the responsibility of keeping the van tuned up — even if the cost gets covered by Enterprise — and keeping everyone riding in the back seat safe while they enjoy the ride.

Lorrie Bowen, the primary driver for the vanpool between Mobile and the Biloxi VA Medical Center, calls the role both an honor and a big responsibility.

“There’s 10 people’s lives in this van,” Bowen said. “So this is not something I want to play with.”

Shane Pierce doesn’t mind filling in as the driver for Bowen from time to time, but he has no desire to take over the position permanently — a position that will need to be filled soon as Bowen looks ahead to retirement.

He waited for a year-and-a-half for his schedule to line up so he could join this vanpool to enjoy less responsibility, not more. As a passenger, he can just listen to music and relax on the commute.

“You can just jump in there and just put your earbuds in and just chill out,” Pierce said. “Close your eyes and wake up. Time to go to work.”