What is korfball? A look into the World Games sport and Birmingham 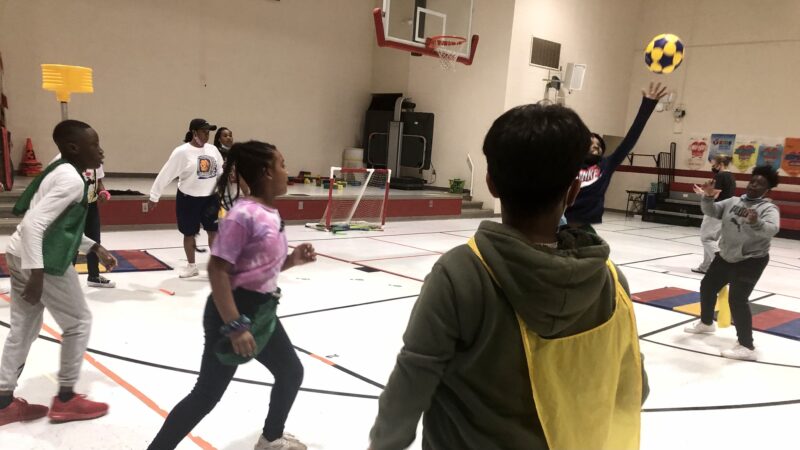 Students at Glen Iris Elementary School play korfball at recess. The sport is a part of their P.E. curriculums.

The president of the United States Korfball Federation, Carl Yerger, often gets questions from people wondering if korfball is actually a real sport.

“There was a level of silliness because it does kind of sound like a goofy name,” Yerger said. “It’s like, what the heck is this?”

Korfball was created in 1901 by a Dutch school teacher in Amsterdam who wanted a game all students could play together. The “korf” in korfball means basket in Dutch and the game is kind of like a mix between basketball and lacrosse where players pass the ball with their hands but they can’t dribble and they score points by tossing the ball into a goal on an 11.5-foot post that doesn’t have a backboard. It’s a sport that the Netherlands has dominated for years.

“So if you’re going to be gambling on the World Games, bet on the Netherlands and korfball,” Yerger said.

Yerger also sells the games as the world’s best-mixed team sport because it was designed to be played by both men and women together on the same team where men guard men and women guard women. It also teaches important cornerstones of sportsmanship. For Korfball players, the World Games represents the sport played at its highest level. But Yerger said it’s hard to recruit Korfball players in the United States.

“One of the challenges we have in the United States about korfball is how do you get people to play a sport that they’ve never heard of, that they can’t really play against, where getting the equipment is hard?” he said.

That’s why the United States Korfball Federation (USKF) donated 10 korfball goals and ball sets to Birmingham City Schools almost five years ago as a way to get more kids interested in korfball.

According to Sherri Huff, the program specialist for K-12 physical education at Birmingham City Schools, when korfball was introduced to students it was an instant hit.

“We had individuals from the Netherlands to come over and train our teachers and talk about korfball,” Huff said.

“We do soccer. We do a volleyball unit. We do a tennis unit,” Smith said. “And we’ve just added korfball to that unit as well.”

Korfball was designed to be an accessible game for everyone. It’s co-ed, but boys can’t dominate the court because it’s four men and four women on a team working together. Height isn’t an advantage when you’re shooting into an 11.5-foot goal and korfball experts tout the game as good for all ages. Korfball is all about skill, agility and teamwork.

Smith said korfball is a household name in Birmingham City Schools. So much so that Coach Carol Rhoden at W.J. Christian K-8 School was going to be the coach for the U.S. Korfball team homegrown right here in Birmingham.

“Yes, I was fired up because it was an opportunity to represent the U.S. quite honestly,” Rhoden said.

Once it was announced the World Games would be hosted in Birmingham, the USKF hatched a plan to have a team created in Birmingham to participate in the games, and Rhoden was immediately on board.

“I gravitated to it because I’m a physical educator, and I love the fact when you have inclusion and everybody is included, one player can’t dominate the game and it forces them to play as a team. And I fell in love with the game,” Rhoden said.

Rhoden said she was ready to fly a team out to the Netherlands to train. But with so many new players on the U.S. team just weren’t able to qualify for the World Games. They would’ve had to be Top 8 in the world.

But that doesn’t stop the Korfball greats from keeping hope alive that the U.S. will have a place in korfball championships again. Rebecca Shields was one of the first players on the American korfball team when the U.S. Korfball Federation was founded in 1978.

“You know, most people that are athletes, that’s a dream to be on a U.S. team at some point in their life, even if they’re not super great at their sport,” Shields said. “I just thought this is my opportunity, and that’s what my friends and family said, ‘Oh, here’s your opportunity to be on the United States korfball team, so you finally got your dream, even though no one’s ever heard of the game’.”

Shields said she was teased a little for being on the team, but she also said she wouldn’t have given up that opportunity for anything. Korfball has taken her all over the world. She hopes the World Games in Birmingham show people how fun the sport is.

“I know for korfball and for other team sports, this is a chance to really show the world that we are a bona fide sport,” Shields said. “We really love our game and we’re good at it and we want other people to start playing it because we love it so much.”

A big moment in U.S. korfball history is the 1985 World Games in London where a three-way korfball tie for bronze ended in a shootout. Chris Frederick was on the U.S. team during that game and he took the first shot.

“We ended up winning the shootout to win the bronze medal,” Frederick said.

It was the first and only time the U.S. has ever medaled in korfball. Frederick is now a professor at Pace University in New York but he said his korfball days were the best times of his life.

“I still get emotional about it because for a little kid originally from projects in New York City to growing up in the inner city of Pittsburgh, to have a chance to do this and to win the bronze medal was unbelievable,” he said. “But for us, just winning a medal, we felt like gold medal winners.”

Frederick was later chosen for the All-World All-Star Team in 1987 at the International Korfball Federation World Championships in Holland. He’s planning a reunion at this year’s World Games for all his old teammates and he also hopes the Games inspires a new generation of American korfball players.

“I hope that there is some renewed interest after the World Games in Birmingham,” Frederick said. “I’m sure that all of us old-timers would love to see korfball revived because it did so much for us and was such an integral part of our lives.”

Birmingham City Schools plans to continue teaching students korfball. The U.S. Korfball Federation will host demo games during the World Games for anyone who wants to give korfball a shot.