To reduce gun violence, New Orleans is turning to community groups instead of police 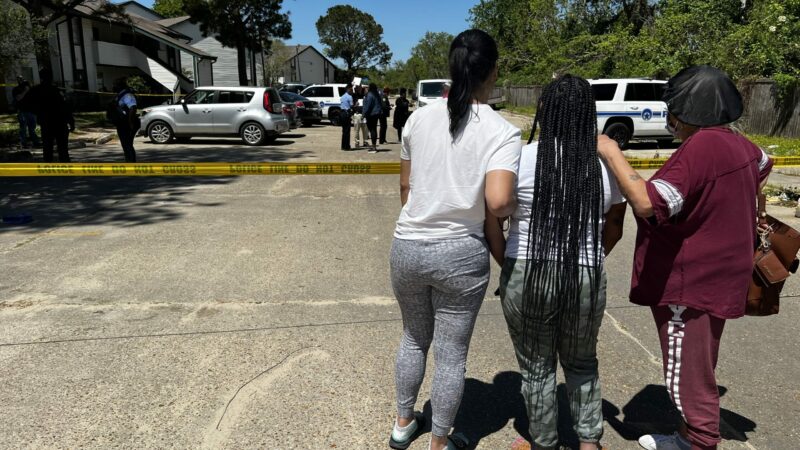 The loved ones of a man shot and killed at Oakmont Apartments in Algiers stand outside yellow police tape, grieving, waiting for answers about his death on April 9, 2022, in New Orleans. His death was one of at least six homicides to occur in the city over this particular weekend.

It’s a muggy, spring afternoon in Algiers, a neighborhood on New Orleans’ west bank, and a Black man has been shot and left dead in his car in front of a dilapidated apartment complex. No one at the scene knows who did it.

As first responders slowly appear at the homicide scene, the victim’s family and friends — his mother, his girlfriend and his community — line up behind bright yellow police tape, confused and grieving. Their cries fill the warm April air.

“It’s just sad,” said Tamika Newman, a family member of the victim.“Everybody wanna be a gangster.”

Newman consoles the man’s girlfriend, who said she just talked to him a few hours before his death. His girlfriend and mother are especially distraught, looking for answers from police on the scene.

Neighbors say the Oakmont Apartments, where the shooting happened, have been abandoned since Hurricane Ida struck southeast Louisiana in August, leaving the residents without a property manager. Windows in the apartment complex are boarded up, and bags of garbage and debris pile up nearby, causing the dumpster to overflow.

But people still live at and regularly visit this apartment complex; many say it has become a magnet for crime. Recent New Orleans Police Department call logs back up that claim.

“We been telling them to shut this down and board this up,” Newman said.

On the front lines

Tamara Jackson hears about the shooting via police dispatch and drives directly to the scene. She’s one of the first people to arrive at the apartment complex, alongside NOPD officers.

Jackson knows the routine. She gets out of her black SUV, walks right up to the police tape and immediately greets the victim’s family — offering them resources and support. As a victim’s services advocate, she is known within the community — she was at the Oakmont Apartments the day before, responding to another homicide.

Jackson guides the victims’ families as they try to cope with the loss, and she helps them deal with questions — both big and small. In this case, the victim’s girlfriend digs through a small manila folder of her boyfriend’s belongings. She’s looking for the keys to her vehicle, which was tied up in the crime scene. She immediately turns to Jackson for help.

“This is all he had in his pockets,” Jackson told her. “I’m not sure where your keys are at, but I can go back in the scene and ask.”

Jackson usually gets to as many homicides as she can in a day, with the purpose of offering the victim’s families support to try to curb the cycle of violence. This particular weekend, she responded to at least six homicides across the city.

“I’m not sure what is happening, but New Orleans tends to spiral out of control where we’re seeing an insurgence of shootings and homicides happening,” said Jackson, a New Orleans native.

The Crescent City isn’t the only one in the Gulf South contending with a spike in homicides.

Law enforcement reported more than 500 people were killed in New Orleans, Birmingham and Jackson, Mississippi, combined in 2021 — most caused by gun violence. For each one of those people, there’s a whole community left behind trying to heal — and organizations working to find solutions to disrupt the cycle of violence.

In an effort to decrease gun-related murders in New Orleans, Mayor LaToya Cantrell’s administration created the Office of Gun Violence Prevention – where Jackson works now – in 2021.

Part of her job is to respond to homicides with a community focus, taking a public health, prevention and intervention approach to try to prevent recurring violence.

“[The Office of Gun Violence Prevention’s] services are in line with offering support and addressing the needs of the victims and their families, where the police department is more focused on the investigation,” Jackson said.

Although the office is new, Jackson has been steeped in this work for nearly two decades. Aside from her role with the city, Jackson is also the executive director of Silence is Violence, a community organization that promotes peace in New Orleans.

For her, this work is deeply personal. After her father was killed in New Orleans in 2000, she made it her mission to help victims’ families navigate the criminal legal system and cope with loss.

Like Jackson, many residents in New Orleans suffer from trauma caused by violence.

And that’s no different in Algiers where the man was shot. A group of women stood nearby, talking about how that trauma gets passed down from parents to children.

One woman at the scene, who has had trouble with law enforcement and didn’t want her name published, said when she was three years old, her mother was killed in a shooting. She said she grew up seeing family and friends being injured and killed by gun violence.

“If we go back way from when we was young to now? The number is bigger than you could ever imagine,” the woman said.

“We know a lot of people that got killed by gun violence,” Newman said. “I don’t even know how to count. That’s how many.”

Trauma caused by gun violence is intergenerational for families and communities across New Orleans. The city’s Office of Gun Violence Prevention is following a “generational gun violence reduction plan,” with the goal of reducing gun-related murders over the next 50 years.

For the past 50 consecutive years, more than 145 homicides have occurred in New Orleans each year. Most of them were gun-related.

“The cycle started way young. It’s an ongoing thing,” said the woman who asked not to be named. “It’s been happening forever. It’s just getting worse, and they’re getting younger and younger.”

The woman has a 12-year-old daughter and said she worries for her child’s life.

“It’s the streets, the world. It’s everything. It’s just crazy,” she said. “When it’s family members so close to you, you don’t know what’s next.”

Systemic issues, and the work to solve them

New Orleans is often listed as one of the deadliest cities in the U.S. It’s a majority-Black city where data shows one out of every four residents lives in poverty. Experts who study community violence say systemic issues, like poverty, make an area ripe for crime. Last year, 218 homicides occurred in New Orleans, the most in a single year since before Hurricane Katrina.

“Poverty is definitely an issue. Folks are living in deplorable conditions, which exacerbates how you manage conflict,” Jackson said.

The newly created Violence Prevention Institute — part of the Center for Youth Equity at Tulane University — got a five-year grant from the Centers for Disease Control and Prevention to be a hub for youth violence prevention in New Orleans and across the Gulf South. The center combines research and community engagement to respond to and prevent violence — outside of the realm of law enforcement.

The center is also the first of its kind in the Gulf South, and one of only five in the country. It’s led by Tulane professors Samantha Francois and Julia Fleckman, who combine their expertise in public health and social work and collaborate with community leaders, like Jackson, to study and prevent community violence.

Francois said the peaks in homicides that have been occurring in the past two years are the long-term result of COVID-19. People have been experiencing job loss, housing instability, food insecurity, chronic illness and other issues exacerbated by the pandemic, she said. All of this combined with an already-fractured system plagued with issues.

“This is not unique for New Orleans, but across the country,” Francois said. “Violent crime comes in waves. We are in a peak right now across the country that has been spurred by the pandemic. In our media cycles, in our political discourse, we are oversimplifying this.”