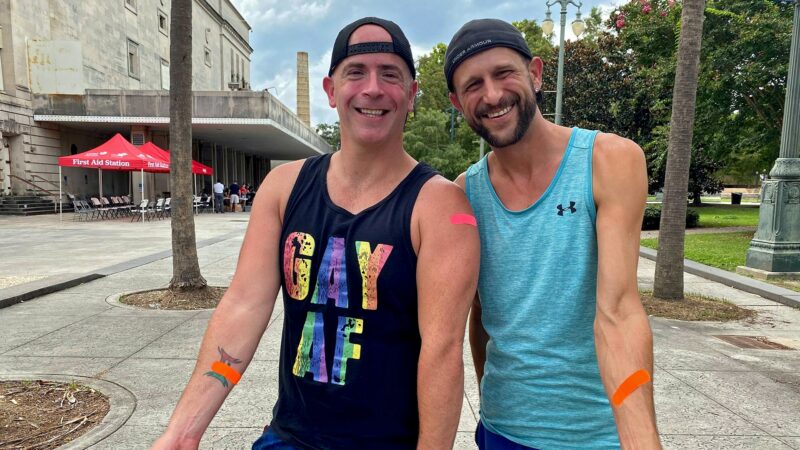 Labor Day weekend in New Orleans was jam-packed with color parades, pub crawls, and parties brought on by the 50th anniversary of Southern Decadence, the city’s LGBTQ festival often referred to as “Gay Mardi Gras.”

With hundreds of thousands of people descending upon the city for the first time in two years, thanks to the COVID-19 pandemic, national and local health officials saw the event as an opportunity to promote and administer a different two-dose vaccine — Jynneos, which treats monkeypox.

There are currently about 20,000 cases of monkeypox across the U.S., with the majority of them in communities of color. There have been just over 300 cases across Alabama, Louisiana and Mississippi combined.

Data from the Centers for Disease Control and Prevention suggests the leading group of people impacted by the viral infection — spread by prolonged, intimate contact — are those in the LGBTQ community, specifically gay men.

That data has led some to believe that monkeypox is a problem only for the LGBTQ community. But this weekend, the Louisiana Department of Health, the New Orleans Department of Health and the CDC promoted a different message: Anyone can get the virus, and anyone at high risk of exposure to it can, and should, get vaccinated.

Health officials established the Southern Decadence Health Hub ahead of the weekend’s festivities as a pop-up vaccination site in the historical Louis Armstrong Park. Shantel Hébert-Magee, New Orleans’ regional medical director at LDH, said the site of the hub was chosen specifically to be inclusive and reflective of the community.

“Africans and enslaved populations would use [Louis Armstrong Park] as a space to congregate and it became a symbol of freedom and autonomy,” Hébert-Magee said. “We wanted to choose a place that was considered a cultural landmark that is reflective of those tenets and beliefs.”

Teresa Sokol, an LDH state epidemiologist, said the state got up to 6,000 extra vaccine doses from the CDC ahead of the event, as well as additional medical staff to administer the shot. The hub also administered 150 COVID-19 shots, and LDH provided fentanyl strips, Narcan, nasal spray, and condoms to ensure people celebrating did so safely.

“We want to be intentional and showcase all our wrap-around services, and show that we really care about peoples’ health and aren’t just trying to push the vaccine,” Hébert-Magee said.

Anthony Reed and his boyfriend, Christopher Bowles, received two of the over 800 Jynneos doses administered over the long weekend.

“A couple that vaccinates together stays together,” said Reed. “I know it needs to get done. I’d rather get the shot and have any symptoms down the road be less severe than not having a vaccination for it.”

Bowles noted that he liked the location of the vaccination site in a public, but more welcoming setting.

“It’s a safe space for the most part,” he said. “There are signs everywhere [for the shot] but I’d rather come here and get a shot versus on a corner in the French Quarter, even though… everyone’s out there.”

The Southern Decadence event was one of two partnerships in the South that the CDC put on over the holiday weekend where there were large LGBTQ gatherings. Vaccination hubs were also established at Black Pride in Atlanta and Pridefest in Oakland, California.

Many of the people at the vaccine event said they saw posts about it on social media and on dating websites. Organizers also left fliers in bathrooms in notable LGBTQ bars, informational booklets in hotels, and details on the hub also spread through word of mouth throughout the five-day festival.

The New Orleans hub saw a lot of local residents, but also people from New York and Los Angeles — where the vaccine supply has been limited.

Max Ginkle, a Los Angeles native at the festival, stumbled upon the site and jumped at the chance to get his second shot of the vaccine after having trouble getting it at home due to high demand and long lines.

“It was perfect timing, perfect location,” Ginkle said. “It was unplanned and it just ended up being a convenient location.”

Sokol noted that there were also many people from conservative areas, like the Mississippi Delta and rural Alabama, who stopped by.

“[A] lot of folks here who reside in rural areas have remarked about the stigma they’re concerned about experiencing if they try to seek the vaccine in their home state,” Sokol said.

Hébert-Magee said vaccination drives are often more successful outside of clinical spaces where people can feel judged or anxious.

“I would encourage other states like Mississippi and Alabama to find spaces that signify trust and security,” Hébert-Magee.

Aside from ease and comfort,  another key strategy for the vaccination site was spreading the message that monkeypox isn’t exclusive to LGBTQ people.

John Brooks, who leads the CDC’s HIV/AIDS Prevention division, said the agency has taken lessons from both the COVID-19 pandemic and the HIV/AIDs crisis — which is prominent across the Gulf South and Southeast — to help create their plan of attack.

“We’ve had 30 years of experience to learn from HIV,” Brooks said. “The biggest lesson we learned is that we need to tell people the truth about who is being affected by this, but we need to create ways to access the services that are non-discriminatory and non-stigmatizing.”

When the World Health Organization declared monkeypox a public health emergency at the end of July, WHO Director-general Tedros Adhanom Ghebreyesus pointed out that stigma or discrimination against communities hit hardest could be detrimental to efforts to stem the spread of the virus. That issue has been top of mind for some health officials.

“Our message is that regardless of a person’s sexual orientation or gender identity, the thing that puts you at risk is close, intimate contact with someone who has monkeypox,” Brooks said.

Darryn Johnson, who came to Southern Decadence with a group of friends from Lake Charles, Louisiana, said he feels that there’s an unfair burden on the LGBTQ community to stop the spread of monkeypox.

“It seems like it’s up to us to make a difference about monkeypox. And if that doesn’t happen, then it’s on us,” Johnson said. That’s how it feels.”

Johnson’s friend at Southern Decadence, Jae Hinton, echoed his sentiment, saying he’s noticed diseases — like HIV/Aids and monkeypox — spread when communities like his are forced to stay hidden and can’t seek help.

Hinton also said it’s important that people set aside their personal judgments and work together to stop the spread of monkeypox now before it becomes a problem that impacts everyone.

“Let us be in the light to let us exist and have a life and be free to move among people when we have to hide,” Hinton said. “When people get pushed into the margins, that’s when everything falls apart. People just get shoved aside and left until it becomes everybody’s problem.”

This story was produced by the Gulf States Newsroom, a collaboration among Mississippi Public Broadcasting, WBHM in Alabama and WWNO and WRKF in Louisiana and NPR. Support for health equity coverage comes from the Commonwealth Fund.