Last parent of a child killed in 1963 church bombing dies 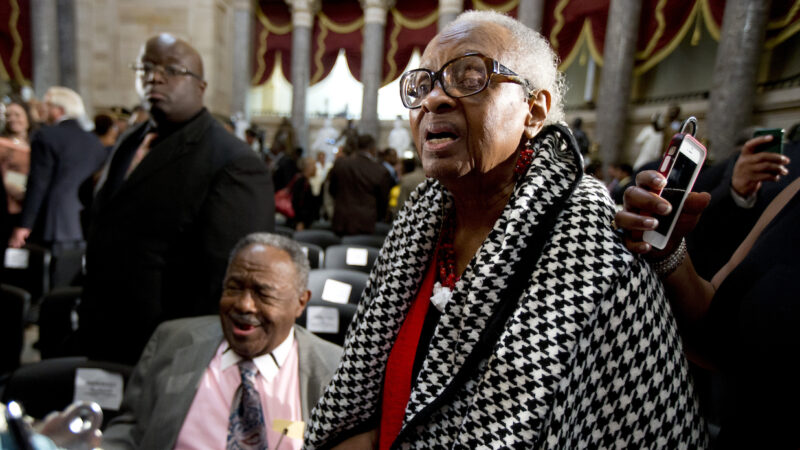 Maxine McNair, right, and Jewell Chris MacNair, left, parents of Denise McNair, the 11-year-old black girl killed in an Alabama church bombing nearly 50 years ago with three other girls, attend a ceremony at the U.S. Capitol in Washington, Tuesday, Sept. 10, 2013, awarding the Congressional Gold Medal to 14-year-olds Addie Mae Collins, Carole Robertson and Cynthia Wesley, and 11-year-old Denise McNair. The ceremony comes five days before the 50th anniversary of their deaths inside the 16th Street Baptist Church in Birmingham.

BIRMINGHAM, Ala. (AP) — Maxine McNair, the last living parent of any of the four Black girls killed in a 1963 Alabama church bombing, died Sunday. She was 93.

McNair’s family announced her death in a press release. A cause of death was not given.

Three members of the Ku Klux Klan were eventually convicted in the case, the first in 1977 and two more in the early 2000s.

Maxine McNair worked as a teacher for over three decades in Birmingham public schools. Her daughter, Lisa McNair, said she changed many lives through education and left a lasting legacy through the students she touched.

“Mrs. McNair was an amazing wife and mother and as a teacher of 33 years in the Birmingham public school system imparted knowledge in the lives of hundreds. We are going to miss her laughter and her humor. The family would appreciate all of your thoughts and prayers,” the family’s statement said.

Maxine McNair’s husband, Chris McNair, died in 2019 at the age of 93. He was one of the first Black members of the Alabama legislature since Reconstruction and a Jefferson County commissioner.

In 2013, Maxine McNair attended an Oval Office ceremony in which President Barack Obama awarded the four girls the Congressional Gold Medal, one of the country’s highest civilian honors.

Funeral arrangements for a celebration of Maxine McNair’s life are pending.

Denise McNair was one of five girls who had gathered in a downstairs bathroom at the 16th Street Baptist Church on Sept. 15, 1963, when a timed bomb planted by KKK members went off outside under a set of stairs.

The fifth girl and sister of Addie Mae Collins, Sarah Collins Rudolph, was blinded in one eye by the blast. She later provided testimony that helped lead to the convictions of the men accused of planting the bomb.

The church bombing came during the height of the fight for Civil Rights in America, and as Birmingham’s public schools were being desegregated. The four girls became emblems of the racist hatred that emanated from much of the opposition to equal rights.