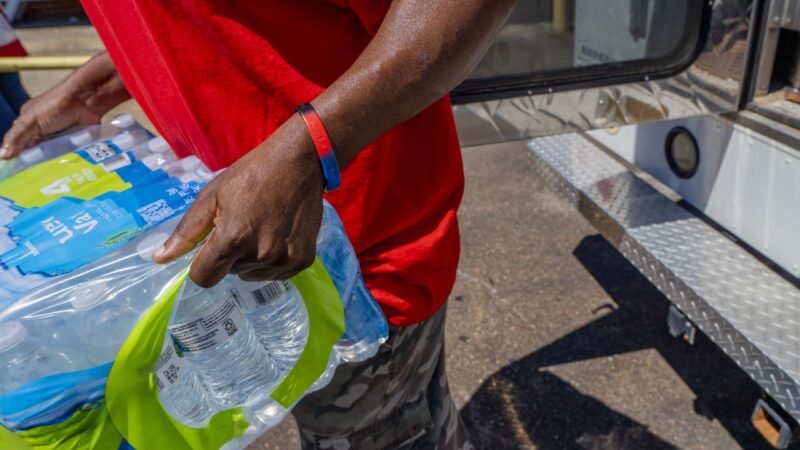 Walter Houston unloads a case of water bottles donated in Jackson, Miss., by the Salvation Army to the Mississippi Industries for the Blind. (Leslie Gamboni for NPR)

The short-term solution to the water problem in Jackson, Miss., has been free drive-thru bottle water pickup sites.

But that’s an issue for people who have no way to get to the water, like April Williams. Her car’s been broken down for a week and it’ll likely be another before the part she needs can come in. On Thursday, she was down to half a case of bottled water in an apartment with three adults and two young kids.

“The main thing we need, it’s a struggle to get right now,” Williams said. “You’d be surprised to know how much you need water to survive.”

Jackson residents without transportation — or the gas money to spend waiting in some cases hours — have felt abandoned during the city’s water crisis. Local nonprofits have been delivering water directly to some residents, but they’re still working on scaling up to dealing with a problem that stretches across the city.

City agencies like the fire department have been passing along names of low-income neighborhoods where transportation options are sparse to the Salvation Army. That’s how the aid group found Williams about a mile west of Jackson State University and gave her several cases.

Water pressure has now been mostly restored in Jackson. But a boil water notice remains across the city. Williams kept her tub filled with water in case she needed it to flush the toilet.

Dorthy Young sipped from one of her last three palm-sized water bottles when the Salvation Army arrived. She’s 85 years old and can’t get around without a walker or wheelchair. A neighbor who saw the Salvation Army’s truck come by asked for some cases to drop at Young’s door. Cleaning up the dishes piled up in her sink was her priority after getting the clean water.

“I worry about it cause you can’t get your dishes clean,” Young said.

The city’s been partnering with the Mississippi Rapid Response Coalition, a collaboration of aid groups in Jackson, for distribution sites and home deliveries. Jackson has dealt with boil water notices for decades, so the nonprofits are used to home water deliveries.

But those past notices were in just pockets of the city — the groups weren’t prepared for all of Jackson’s water supply to be threatened. This week, the coalition expects to ramp up the home deliveries. While there’s no clear timeline for repairs to the city’s failed water treatment plant, the coalition plans to continue providing clean water for weeks.

“We know we’re going to have boil water notices during the repairs,” said Rukia Lumumba, the executive director of the People’s Advocacy Institute. She’s also the sister of Jackson Mayor Chokwe Antar Lumumba. “We’re going to need clean water from somewhere outside of the pipes.”

Springboard to Opportunities works with five affordable housing communities in Jackson. Aisha Nyandoro, the group’s chief executive officer, spent much of last week on the phone tracking down water to deliver to the families she works with. She finally connected with an Alabama sheriff who personally drove down a large load with several pallets of water on Thursday.

The families in these complexes make on average $12,000 per year, according to Nyandoro. Even if they have a car, they can’t afford waiting in long water lines.

“Time costs,” Nyandoro said. “Gas costs. So it’s all of these pieces that so many of us take for granted that families are having to negotiate right now.”

Yvette Day is one of the residents Springboard to Opportunities delivered water to on Thursday. She could afford a car, but she’s waiting first to see if she wants to remain in Jackson or follow her daughter to Texas. Apartments in the Lone Star State are pricier, but Jackson’s constant water problems are pushing her toward moving.

The water pressure dropped again at these apartments, but for a new reason — water has been gushing out of the manhole and flooding the street throughout the morning.