In Jackson, Miss., football goes on despite the water crisis 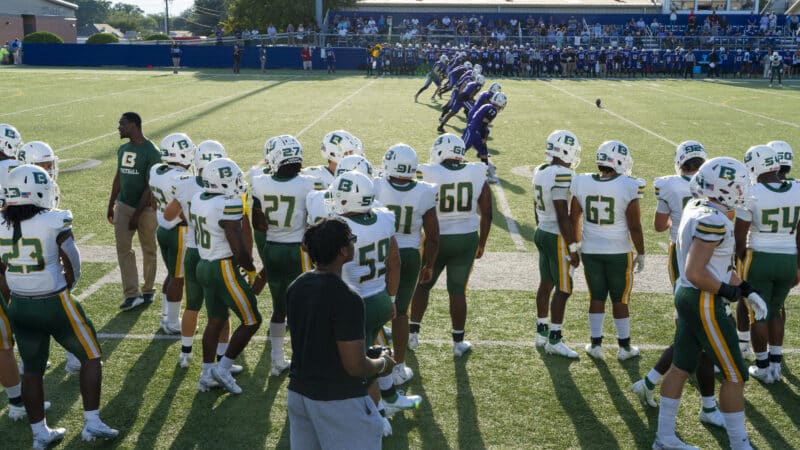 Rain, shine, dry faucets or low water pressure, in the South the game must go on.

Some residents in Jackson, Miss., have been without running water for days, while others have been under a boil water notice for more than a month. But unreliable water has been a way of life in Jackson for years and that wasn’t enough to stop football fans from seeing the season open between two division III Jackson schools — Millsaps College, playing as the home team, and Belhaven University as the away team.

Players’ family members drove in from out of state to support their sons. They also brought with them cases of water after hearing about the on-and-off water pressure in the dorms. Flooding of the Pearl River, which cuts through Jackson, led to the city’s main water treatment plant failing and a scramble for clean water as the system lost pressure.

Millsaps College said Friday night that they had good water pressure. But it’s been fluctuating, so the school brought in portable toilets and mobile shower units just in case they need to be rolled out.

Once the game started, it was easy to forget about the water crisis. The away bleachers sat hundreds of fans wearing Belhaven’s green and gold. A blue Powerade sat under one man’s sneaker while the concession stand sold condensation-covered Dasani water bottles for $3. On the field, benches were lined with classic green and yellow Gatorade squeeze bottles.

The rare reminder of the city’s water woes came when the game’s announcer thanked Infinite Insurance for providing 37,000 bottles of water for students and players.

Belhaven freshman Alyssa Pearson came to support her fellow Belhaven athletes after her soccer team beat Sul Ross State University earlier in the day. Water’s been a non-issue during the game, though the other night it was a problem post-game — after wrapping up play she was ready for a quick shower, but found her dorm no longer had any water pressure. She went off-campus to clean up.

In Acworth, Ga., where Pearson’s from, boil water notices aren’t the norm like in Jackson. It’s been a tough education — not enough to make her consider transferring, but she has been learning what it’s like to brush her teeth with bottled water and wonder just what else is coming out of the shower head.

“I have no idea if my toilet is going to flush or not today,” Pearson said.

Dry toilet lines are new for Belhaven senior Izzy Erickson, but boil water notices have been a constant of her four years here. She’s not planning on letting the crisis ruin her senior year, but she’s ready to be done with Jackson.

“I know I won’t be living here after college, so I guess I have that to look forward to,” Erickson said.

Other seniors give the low water pressure a shoulder shrug — just another chance to embrace the Belhaven edict of overcoming adversity. One baseball player lives off campus and lets friends enjoy his working shower when the dorm’s water flow is more of a drip.

Jackson State University senior Patrick Powe Jr. spends his free time delivering water to residents living in Jackson’s affordable housing communities — many residents either don’t have a car to get to the drive-through water distribution sites or can’t afford to spend the gas waiting potentially hours for the pick-up.

Tonight, he’s in the stands supporting his former high school teammate playing for Belhaven, which won the game 49-21. He’s had to deal with water issues all his life but part of what makes this crisis different is how long it’s lasting. Some residents have been under a boil water notice for a month and there’s no timeline for repairs. But Powe said even if the city’s water is still undrinkable for Jackson State’s first home game Sept. 17, he’ll still be there at Mississippi Veterans Memorial Stadium cheering on his team.

“I’m still going to be in the Vet, Jackson State from head to toe, cheering our boys on,” he said.

EDITOR’S NOTE: A previous version of the web story incorrectly said that Belhaven won the game 49-1. The score was actually 49-21.