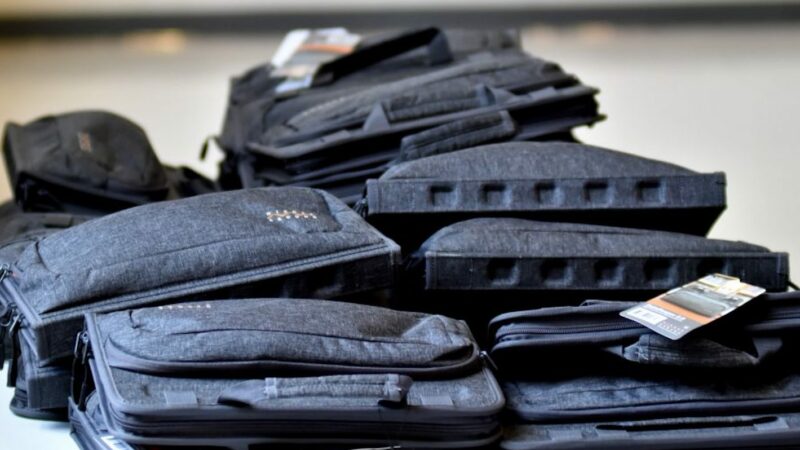 A stack of digital devices sit ready for student pickup during orientation at Fairfield High Preparatory School on 8-11-2020. The school provided the devices as schools relied on virtual learning.

A mental health specialist says it will take years to determine whether students will recover from the effects of COVID-19 on their education.

“I don’t think that we have seen the full effects of COVID on a generation,” said Malissa Galliher, clinical director of the Jefferson, Blount, St. Clair Mental Health Authority.

As COVID moved into the state two years ago, education officials decided to close schools for 2½ weeks to blunt the effect the virus would have on students. The danger went on much longer than they anticipated. While schools are back in session this school year, many schools have had to close down and use remote learning periodically as the highly contagious omicron variant swept through the state.

Galliher said students in schools that went to remote learning were placed in a situation where they could not connect with other students, and their parents became their educators.

Many parents who had office jobs were forced to work from home while they also navigated the unfamiliar terrain of managing their children’s education.

“It was a huge task for parents who dropped out of school or could not do high school work or were educationally behind in school, and they had to help their kids,” Galliher said. “Nothing replaces teachers and learning in the classroom.”

She said that, besides the gaps in the students’ education, there were once-in-a-life milestones that were missed, such as graduations and proms.

Summer Perez of Gardendale said her two sons missed the middle school experience and have been catching up since their return to school in August.

When COVID hit in 2020, Perez said, she faced two dilemmas. Her two middle schoolers began remote learning through the Jefferson County school system, and she was laid off from her job at the Grand Bohemian Hotel for three months.

When she went back to work, she had to balance her work shifts with those of her husband while also keeping her sons on target with remote learning.

At the time, her son Ray was in sixth grade, and her son Bruce was in fifth.

“They enjoyed remote learning, but their grades suffered, their test scores dropped and they disliked school,” she said.

Ray now has some special education classes for his autism, and Bruce is a “band geek, like his Mom,” Perez said.

“Our greatest fear in 2020 was how far COVID would go if it struck us,” she said.

Perez and her sons took lots of walks through their neighborhood to combat the craziness of taking classes where they lived.

“The hardest part was getting those energies out of the boys’ systems,” she said. “We went to my in-laws a lot, where they could romp in the woods. We went out without being out with people.”

In 2021, the boys were able to return to ComicCon and Lego Con, which had been canceled the previous year. But the family wore masks and socially distanced themselves, Perez said.

In January, Birmingham City Schools Superintendent Mark Sullivan said remote learning does not work, and he wants to keep students in the classroom.

He said he and other educators were reluctant to move to remote learning in the beginning.

“But we followed science and guidelines from the Centers for Disease Control and Prevention,” he said.

He said there were multiple levels on which educators did not feel remote learning was working. “The students were not connecting socially and emotionally,” he said.

However, he conceded, “There is data where a small percentage did well.”

“But the home guides the level in learning,” he said. “Many of our parents are essential workers. They could not be home, so you would have a 5-year-old kindergartner being babysat by a 10-year-old when the parents were not home to guide them.

“But in school, where students are face to face with teachers, that is not the case. Unless a child is extremely disciplined, he will not do well with virtual learning and other students will need a teacher to direct them.”

However, remote learning still will be used for a short period of time when students are injured or ill, Sullivan said.

“It was interesting that math scores dipped, but reading dipped more. That is significantly different from what we usually see,” Sullivan said.

The state put a moratorium on the standardized tests and accountability measures being reported from students in March 2020 and June 2021.

The American Academy of Pediatrics also in January issued its opinion that children need to return to the classroom because the pandemic has created gaps in their learning and a national state of emergency in children’s mental health.

But the academy said the return to school must include proper safety protocols, such as vaccinations, masking, and physical distancing. Alabama schools do not require vaccinations or masking.

Perez knows the importance of COVID safety protocols. “People now say COVID is ‘over,’ but it will never be over,” she said. “It is like the flu and the chickenpox and other viruses. It is here to stay.”