Deion Sanders has ushered in a new era of HBCU football. Will the SWAC capitalize on it? 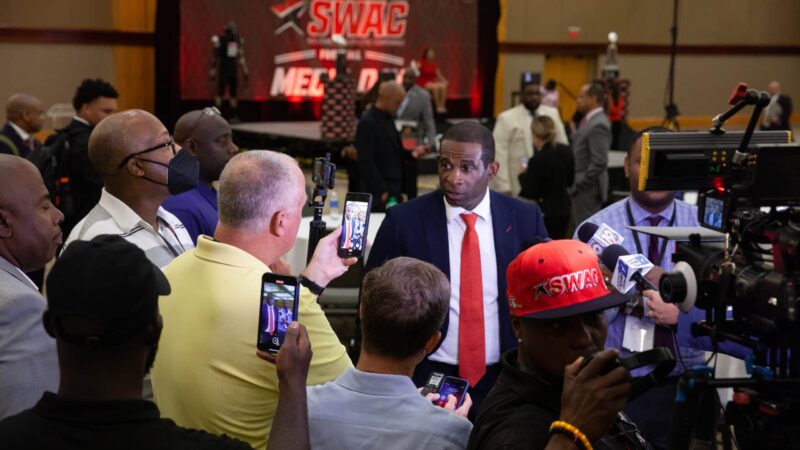 Jackson State University football coach Deion Sanders speaks to a group of media members during the Southwestern Athletic Conference’s media day event in Birmingham, Alabama, July 21, 2022. Sanders, known for his hall of fame playing career, has helped increase the spotlight on sports programs at historically black colleges and universities since taking on his role at JSU in 2020.

It’s time to put on your school’s colors and get the tailgate grill ready because college football returns this weekend.

The Gulf South might be known for its powerhouse football programs, but the sport has also been a cultural cornerstone at the numerous historically Black colleges and universities throughout the region.

Now, there’s an even bigger spotlight on these schools, thanks in large part to former NFL star and current Jackson State University head coach, Deion Sanders — who’s shaking up the way things have traditionally been done in college football.

Since taking the lead at JSU in 2020, Sanders has pulled off a number of power moves that typically do not happen in the Southwestern Athletic Conference (SWAC) — the conference the Tigers play in that’s made up entirely of HBCUs.

He donated half his coaching salary to help renovate JSU’s stadium in Mississippi’s capital city, he brought a sold-out, record crowd to JSU’s rivalry game against Alcorn State in 2021, and he’s even pulled members of his coaching staff directly from the NFL.

The waves of change haven’t been contained to JSU only. Sanders’ rejuvenation of the Tigers’ program led to Grambling State University, an HBCU in Louisiana, making a big move of their own by hiring Hue Jackson, former head coach of the NFL’s Cleveland Browns, as their head coach ahead of this season.

Jackson even tipped his hat to Sanders’ influence during his press conference at the SWAC’s media day event — held in Birmingham, Alabama, in July — as the catalyst for the current swell of change at HBCUs.

“I love where we are with our program and I’m trying to inflame other programs, as well, simultaneously,” Sanders said. “So when I’m up on the stage talking, I’m not just talking for Jackson State. I’m talking for the whole HBCU and the whole SWAC and the whole Black college football in general.”

But Sanders’ biggest move to date involved the number one high school football recruit for the 2022-23 school year.

Travis Hunter shocked college football fans across the country in December when he decided to commit to “Coach Prime” and JSU. Sports Illustrated called the move, “probably the most shocking decision in the history of college football recruiting.”

Hunter initially committed to Florida State, a predominantly white institution where Sanders advanced his football career. It’s rare for an HBCU to land a top athlete of Hunter’s caliber. The schools usually don’t offer the same resources — like prestigious training facilities and stadiums, and they usually don’t have the same caliber of coaches. Still, Sanders was able to change Hunter’s mind.

Hunter wants his choice to be a stamp in Black history.

“Not enough of our Black brothers goes to HBCU, and they all think they just have to go to a PWI to get the exposure they need,” Hunter said during the SWAC’s media day event, in Birmingham, Alabama, in July. “But, you don’t have to go there. You can go to an HBCU and I got brothers and sisters that might not have the talent I have. So, I wanted them to know that they’re accepted at an HBCU, too.”

This is all happening against the backdrop of a huge change across college football with Name, Image, and Likeness deals.

Thanks to a Supreme Court ruling in 2021, college athletes are now able to get paid by companies without losing their NCAA eligibility. Some coaches — including Sanders — worry this will become the main factor when athletes are picking a school. But others believe this could offer an equalizer — offering more financial opportunities for students in need, no matter where they choose to play collegiately.

NILs cropped up in the aftermath of Hunter’s decision, with some voicing their suspicions about why a top recruit would want to go to an HBCU, like University of Alabama head coach Nick Saban.

“Jackson State paid a guy a million dollars last year that was a really good Division One player, to come to the school — it was in the paper — and they bragged about it,” he said.

Nick Saban claims Jackson State paid a player one million dollars to come and play for Deion Sanders and bragged about it. Any idea who this player is? Serious question 😂 pic.twitter.com/ibUBvuW6ET

Saban was clearly referring to Hunter with his comment, referencing a rumored million-dollar NIL endorsement deal Hunter allegedly was offered before stepping foot on JSU’s campus — which JSU representatives and Sanders both denied.

“Coach Saban is my guy. We just recently shot a commercial together and we had a wonderful time. I met his beautiful wife and family, so we’re good. I knew what he was trying to say. It just came out the wrong way,” Sanders said.

Despite the attention, Hunter claims to be focused on the sport.

“No, I don’t really know much about NILs,” he said. “I just come to play football and have my stamp in Black history, go ahead and get to the NFL where I want to be.”

Through NILs, HBCUs are pivoting the way they can get more financial opportunities for student-athletes. At Grambling State, Jackson and the school’s staff already have a process in place for the entire team.

“They go into a portal, and if a particular sponsor picked you,  you become the person that they use,” he said. “But the people who signed up for that, everybody gets a little credit from that.”

Abrian Scott, better known as Scottay on the internet, has a popular YouTube show dedicated to HBCU sports. He wants to see more benefits for the schools themselves.

Recently, the SWAC signed a historic media rights deal with the streaming service HBCU GO TV — widely rumored to be for $120 million over 10 years. This would bring in more money and broadcast more games to more households than ever before.

But the deal pales in comparison to the Big Ten Conference’s new seven-year agreement that’s worth billions.

“Here’s a big spotlight on the whole HBCU culture and arena, because as Black people, what you see is that we are the culture, but we never capitalize on our own culture,” Scottay said. “So what Deion is doing is like, ‘Hey, man, you guys got a product, you have a platform, you have sports, you have fans. We can do better with this.’”

Bringing equity to all conferences

Perhaps the biggest change to the game could come as more highly-ranked schools in conferences, like the SEC, open up to playing SWAC schools in future seasons.

It’s something the Crimson Tide has never done, but other schools in their conference have. Louisiana State University will join the ranks when they host Southern University — an HBCU that’s also in Baton Rouge — for the first time in the school’s history next weekend. And LSU already has another in-state HBCU — Grambling State — on the schedule for next season.

Saban, however, floated the idea recently.

“I’ve always been an advocate of playing in-state schools because I think it sort of helps them raise their level and their ability to compete, which obviously if you do that, you also contribute to how successful the players in those organizations can be,” Saban said.

But when it comes down to it, Scottay says HBCU games are much more about the experience than the game itself.

We may never see an HBCU play a school like The University of Alabama. But if HBCUs continue to get top recruits, it could create equity for all the schools and athletic conferences.