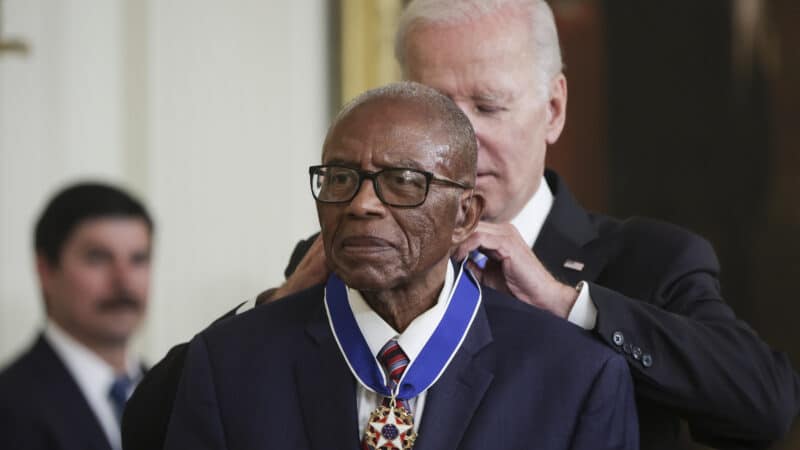 U.S. President Joe Biden presents the Presidential Medal of Freedom to Fred Gray, one of the first Black members of the Alabama state legislature since Reconstruction, during a ceremony in the East Room of the White House July 7, 2022 in Washington, DC. President Biden awarded the nation's highest civilian honor to 17 recipients. The award honors individuals who have made exemplary contributions to the prosperity, values, or security of the United States, world peace, or other significant societal, public or private endeavors.

“From the very beginning, I’ve known that there is no one more deserving of our nation’s highest civilian honor than Attorney Gray whose trailblazing work helped end segregation and advance a more equitable future,” said Alabama Congresswoman Terri Sewell.

Sewell has been advocating for Gray to receive the award.

Fred Gray was born in Montgomery and dedicated his life to seeking justice for Black people in the courtroom. He’s most known for representing Martin Luther King Jr., Rosa Parks, NAACP and victims of the Tuskegee Syphilis study.

Among the 16 other recipients of the medal was civil rights activist Diane Nash. Nash was born in Chicago and is most known for co-founding the Student Nonviolent Coordinating Committee (SNCC). Through her leadership in SNCC, she helped lead the Freedom Rides, Selma Voting Rights Movement and lunch counter sit-ins.

King described her as “the driving spirit in the nonviolent assault on segregation at lunch counters.”

“Unshakeable courage and leadership, Diane Nash, shapes some of the most important civil rights efforts in American history,” said President Biden during the ceremony.

It wasn’t until years after the civil rights era that Nash received recognition for her work.

Nash continues to be an advocate for nonviolent movements.