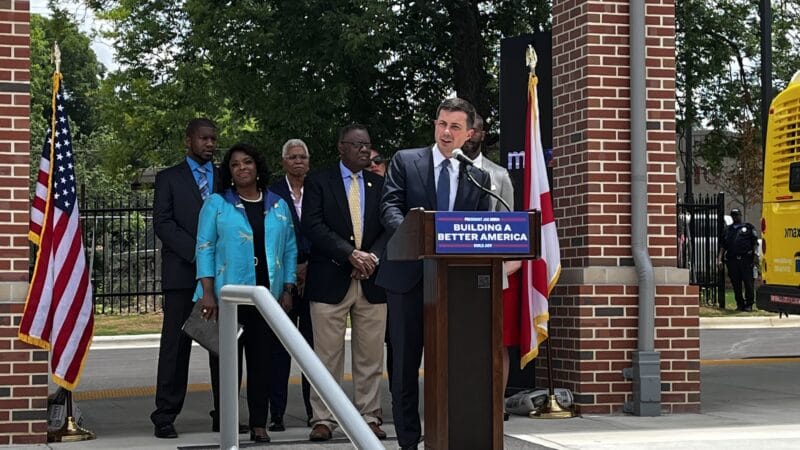 When Interstate 65 was built, it displaced many Black neighborhoods in Birmingham. U.S. Secretary of Transportation Pete Buttigieg drew on that fact when he announced a new initiative designed to undo some of these systemic inequities in infrastructure and transportation during a visit to Birmingham’s Woodlawn neighborhood on Thursday.

“Reconnecting Communities” is designed to unify neighborhoods which have previously been displaced by discriminatory infrastructure decisions. The $1 billion initiative will fund projects that give people more access to their communities like paving more sidewalks, creating new greenways and adding public transportation.

“We can’t ignore the basic truth that some of the planners and politicians behind those projects built them directly through the heart of vibrant, populated communities,” Buttigieg said. “Sometimes in an effort to reinforce segregation, sometimes because the people there had less power to resist, and sometimes as part of a direct effort to replace or eliminate black neighborhoods.

There are many additional cases in Birmingham’s past where railroads and highways divided communities by class and race. For example, Center Street prior to the 1950s segregated the city.

“Birmingham is the perfect city to talk about the importance of transportation equity,” said Birmingham Mayor Randall Woodfin. “Too often communities of color have been cut out of transportation advancements. Those oversights mean residents are often or have often been denied opportunities for adequate health care, education and employment.”

Woodfin said the city will apply for the grant money under the program, but details of how the money will be used haven’t been finalized. He said it will support local plans in Birmingham like the Birmingham Xpress Rapid Transit that is set to open later this year.

“Simply put, when we deny our communities adequate transportation options, we stifle their growth and their ability to build wealth,” Woodfin said.

The initiative is part of the Infrastructure Investment and Jobs Act, which U.S Rep. Terri Sewell said will address more than highways and railroads, but also broadband access and wastewater.

“We finally got across the finish line a bipartisan infrastructure bill that has now been signed and will benefit the state of Alabama and this nation. When I think about the systemic disinvestment that we’ve had in our infrastructure, it was laid bare during this pandemic,” Sewell said.

The plan is the first of its kind on a federal level and will revamp local infrastructure in communities that apply. Buttigieg said “Reconnecting Communities” will prioritize economically disadvantaged communities.

“Just imagine if instead of an overpass right by your house, there is a park where your kids could play with their friends on the weekend,” Buttigieg said. “Imagine if instead of having to drive a mile or more out of your way to get around a rail line, you could drive right over it or even walk straight across a scenic greenway.”

Kyra Miles is a Report for America corps member reporting in education for WBHM.