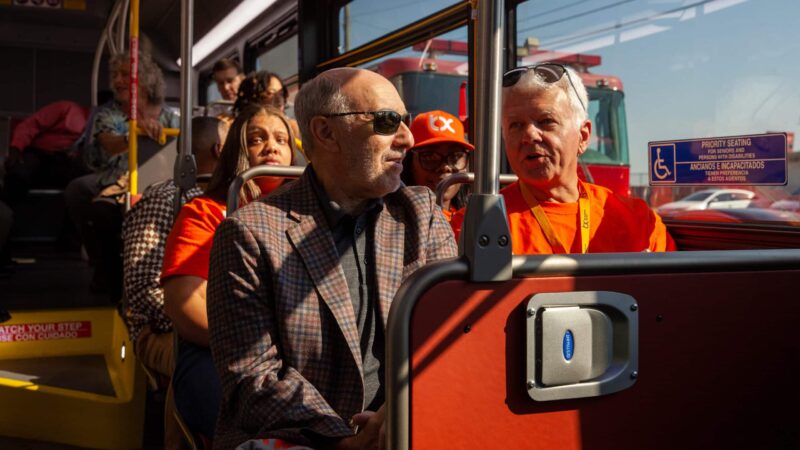 The bus line is similar to a rail line, such as with MARTA, Atlanta’s bus and rapid train system, but by using buses on existing streets.

The Birmingham Xpress is a single route that runs east to west between Five Points West and Woodlawn. Those stops serve as transit centers for the bus line, along with the intermodal station in downtown Birmingham. A total of 32 stops take riders by places like Princeton Baptist Hospital, the University of Alabama at Birmingham, Railroad Park and Sloss Furnace. Busses drive in dedicated lanes.

The stops consist of built-up platforms with bright display screens offering real-time route information. The buses also offer low-floor level boarding that is easier for people with health conditions or impairments. There are WiFi and mobile charging services available on the buses and officials say an app will be coming soon.

Funds for the $64 million project came from the Federal Transit Administration, the American Rescue Plan and the city of Birmingham.

Others during Thursday’s kick-off noted the buses could bring increased safety.

“In the city of Birmingham, every year we have about 40 people that die in car crashes. We know from looking at other countries, other places that have grown with public transportation, they do not have that problem,” director and city traffic engineer James Fowler said.

Residents including Jason Avery are excited about the Birmingham Xpress. He’s been a resident of Woodlawn for almost 20 years and is now the neighborhood vice president.

“I’ll be able to walk down to the end of my street one block, hop on, check my emails while I’m on the way to work and be dropped off like two blocks away from where I work. And that’s the way I really wanted it always to be,” Avery said.

Avery works in public health and loves that the new bus line will be fueled by compressed natural gas, which releases less carbon.

“Alabama is a car state. I think from the time that you’re 16, you dream about having a car and having that freedom. But that freedom is not always free because you see, pollution,” Avery said.

Birmingham resident Will Riley is interested in the bus line. But he wants assurance the in-bus technology will work.

“Whatever decisions they make to encourage the use of it, you know, I definitely think having real-time expectations and reliability is going to be huge for that,” Riley said.