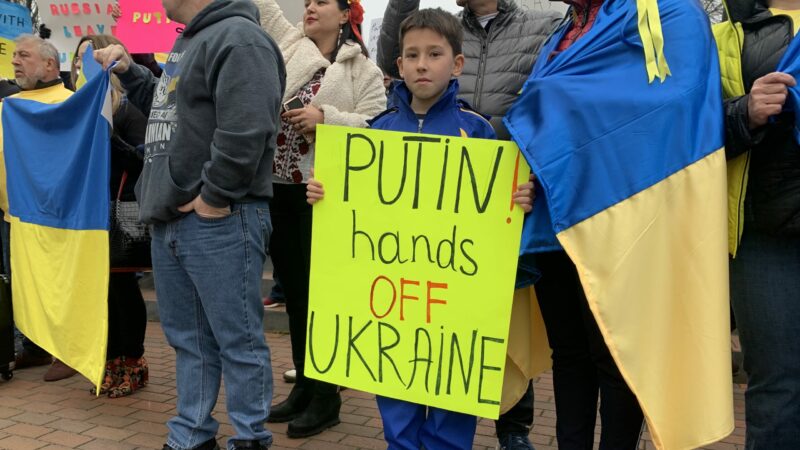 More than 50 people gathered Saturday afternoon at Railroad Park in downtown Birmingham to show support for Ukraine, which was invaded Thursday by Russia. The crowd was a mixture of Ukrainians, Russians, and others.

They asked for Russia to stop its invasion, and if that doesn’t happen, then support from other countries to assist Ukraine.

It’s a sentiment that’s been echoed throughout the U.S. and around the world.

Cabacov, a Ukrainian native, attended the rally with his wife and daughter. He said his cousin still lives there and she’s safe, for now.

The rally’s organizer, Ilya Blokh, said he wanted to show the Ukrainian people that Birmingham stands with them. Blokh moved from Russia to Birmingham in 1991 around the same time the USSR dissolved. His mom is Russian and his dad is Ukrainian.

“It feels shameful and scary,” said Blokh. “I want to be really clear that a lot of Russian people do not support this. This is not done by our people. This is done by the piece of shit president … prime minister.”

Like Blokh, many of the people at the rally still have friends and family in Ukraine. Nataliya Russo said her family had to evacuate from their home and her niece’s apartment building in Kyiv was bombed.

“I called my friends, they’re in the basement,” Russo said. “Now it’s [been] three days, and they can’t get out. They’re really scared. They’re crying. I said ‘how bad it is?’ They said ‘it’s really bad. It’s bombing so close. It’s really, really bad.'”

Meanwhile, some Ukrainians were able to escape including Viktoria Burttram’s sister, who is pregnant.

“[My family] lives 45 minutes from the border with Poland,” said Burttram. “Just because there were so many people, it took them 46 hours to get across the border.”

But she said a lot of her friends stayed to fight, as Ukrainians face a new reality of war.