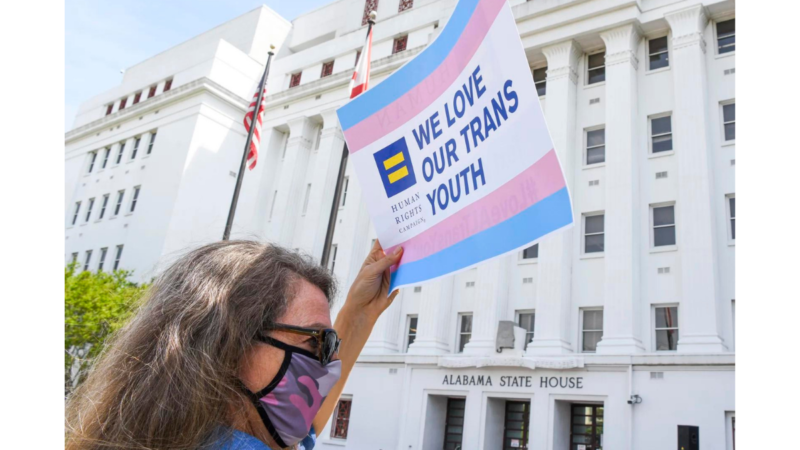 Jodi Womack holds a sign that reads "We Love Our Trans Youth" during a rally at the Alabama State House to draw attention to anti-transgender legislation introduced in Alabama on March 30, 2021 in Montgomery, Ala.

The bill mandates K-12 schools require students to use multi-person restrooms and locker rooms that match the sex on their original birth certificate. The Alabama House of Representatives voted 74-24 for the bill after two hours of contentious debate where Republicans said it would address an ongoing problem in public schools but opponents said it targets trans youth to score political points. The bill now moves to the Alabama Senate.

“Right now, you’ve got males who are dressing up as females, who are identifying themselves as females, and wanting to use the female bathrooms,” Republican Rep. Scott Stadthagen of Hartselle told lawmakers.

Stadthagen said some schools are now being asked to accommodate transgender students who request to use the bathrooms that align with their gender identity. He said the bill is also about protecting girls’ privacy and safety.

“All you are doing is demonizing an already vulnerable population. It’s all under the guise of protecting children just to win cheap political points. That’s all it is,” Rep. Neil Rafferty, a Democrat from Birmingham, said during debate on the bill.

Rafferty said schools in his Birmingham district have handled accommodations for transgender students, “without targeting vulnerable youth that are already having issues with suicide, mental illness, bullying.”

Stadthagen, in urging support for the bill, cited sexual assaults that have happened in school bathrooms. But opposed lawmakers challenged him to name any bathroom assault where a transgender individual was the attacker.

“How many of those cases involved a transgender woman?” Rep. Merika Coleman, a Democrat from Pleasant Grove, asked. Stadthagen replied he didn’t know.

Similar policies in other states have resulted in litigation. The U.S. Supreme Court last year rejected a Virginia school board’s appeal to reinstate its transgender bathroom ban, handing a victory to transgender rights groups and a former high school student who fought in court for six years to overturn the ban.

The full 11th U.S. Circuit Court of Appeals was scheduled to hear oral arguments on Tuesday in the case of a transgender student in Florida who was blocked from using the boy’s bathroom.

Republicans who spoke in favor of the bill said teachers and parents in their districts have expressed discomfort over transgender students using bathrooms that align with their gender identity.

Rep. Andrew Sorrell, a Republican from Muscle Shoals, said there is a transgender student using the girl’s bathroom at a high school in his district. Sorrell said he would not let his now infant daughter attend that school in the future without this bill.

“I think this is such a commonsense bill. I understand and appreciate that you are trying to protect our daughters,” Sorrell told Stadthagen.

“Today, the Alabama State House of Representatives took steps to discriminate against transgender students who deserve the fundamental human dignity of being able to use the bathroom without being discriminated against or humiliated,” Human Rights Campaign Alabama State Director Carmarion D. Anderson-Harvey said in a statement.

The Alabama bill is the second targeting LGBTQ youths to advance in a legislative committee this year. A Senate committee last week advanced a bill that would outlaw the use of puberty-blockers, hormonal treatments, and surgery to assist transgender youth 18 and younger in their gender transition.