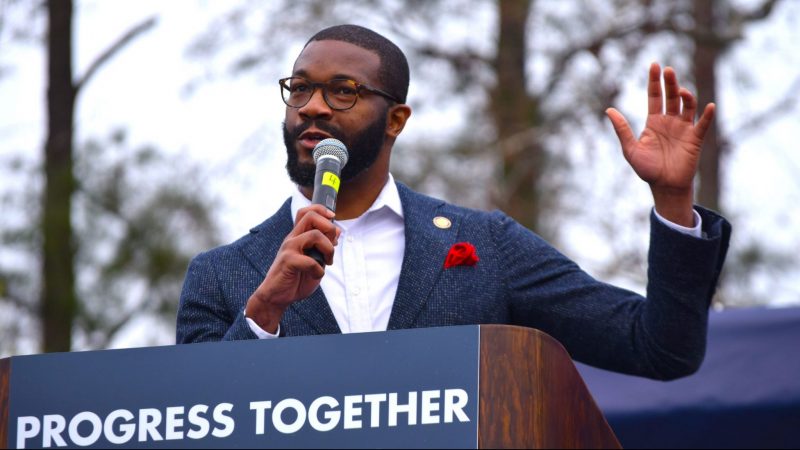 Birmingham Mayor Randall Woodfin announced Jan. 30, 2021, that he would run for another term as mayor.

Mayor Randall Woodfin officially kicked off his campaign for reelection at a drive-in rally at George Ward Park on Saturday, offering a slightly updated slate of second-term goals but maintaining his first campaign’s focus on neighborhood revitalization.

He repeatedly invoked his new campaign slogan, “progress together,” and promised to “finish the job” he started in 2017 over the next five years.

“We’re ramping up everything we’ve already put in place, making it tighter, putting more resources to it,” he said.

Woodfin was introduced by Jefferson County Commissioner Sheila Tyson, who called him a “true leader” and praised his focus on neighborhood revitalization, his Birmingham Promise educational initiative and his removal of the Confederate monument in Linn Park.

Tyson’s fellow county commissioner Lashunda Scales announced earlier this month that she will challenge Woodfin for the office; businessman Chris Woods also has thrown his hat into the ring for the general election, which will be Aug. 24.

During her introduction, Tyson cautioned supporters against the spread of political misinformation on social media.

“Mayor Woodfin has proved that he cares about the citizens here in Birmingham,” she said.

It was a warning Woodfin would echo later in his own speech.

Woodfin focused heavily on his top priority, neighborhood revitalization. He pointed to blight removal efforts. City workers have “knocked one (dilapidated structure) down every single day we’ve been in office,” he said, and his administration increased funding for street and sidewalk paving.

“This is a big city, y’all,” he said. “I’ve got to remind y’all that this is the largest city in the state of Alabama, and in three years you can’t get to every block. You can’t get to every street. But we’ve started and we’ve made progress … We’ve got one more year in this term, and with your help and support, we can finish the job in the next four.”

Woodfin did offer slight tweaks to some of his political priorities. Now that his Birmingham Promise education initiative is up and running, he plans more focus on pre-K education, “making the right investments in the foundational years between birth and five so they have the opportunity to be at grade level when they enter our school system.”

He also promised a strategic shift in his administration’s efforts to combat food deserts, acknowledging that many efforts to woo brick-and-mortar grocery chains to the city’s underserved areas haven’t worked, despite the city’s allocation of $1 million to recruitment efforts. Now, he said, his administration was turning its focus toward mobile grocery stores.

“We reached out to Publix, Kroger, Piggly Wiggly, Winn-Dixie, everybody,” Woodfin told BirminghamWatch after the rally. “‘No, no, no, no, no.’ So around September 20, I started going around to convenience stores, talking to small business owners — the ones that are near public housing, the ones embedded west of I-65, etc. … If we can’t have brick and mortar, how about this? Mom-and-pop convenience stores, two or three days a week, you partner with a local farmer or with somebody like Jones Valley Teaching Farm, and you allow this setup, either inside or right outside your store that’s in walking distance from where these residents live, and you provide fresh produce. That’s the model I’m talking about. It’s not rocket science.”

Birmingham Divvies Up $500K In Bold Funding For Nonprofits

Nine Birmingham nonprofits will receive funding from the city’s Building Opportunities for Lasting Development grant initiative this year, despite an overall reduction in funding for the program.

Field Of Candidates For Birmingham Mayor Continues To Grow

Currently, there are six people in the race for mayor of Birmingham. The filing deadline is July 10.

The Jefferson County Commission is conducting its duties in accordance with state law, says a report from the Alabama Examiners of Public Accounts.

The city of Birmingham is sending two sets of lobbyists to Montgomery — one from Mayor Randall Woodfin’s office and one from the City Council.