New businesses across from the train depot in Bay St. Louis are hoping for a boost from train tourism.

Amtrak wants to restore a love of trains along the Gulf Coast and has plans for a line that would go back and forth between New Orleans and Mobile, Ala. twice a day. Supporters say this will be an economic shot in the arm, especially for the Mississippi towns along the way.

“It’s one of the best things that will happen to the coast,” said Nikki Moon, the owner of the Bay Town Inn in Bay St. Louis, Miss.

But opposition from the freight train industry could halt the proposed 2022 start date. Shippers worry a shared line will delay trains that carry essential goods and drive up costs. Alabama politicians and trade groups accuse Amtrak of failing to do the homework needed for passenger and freight trains to coexist on the tracks.

Meanwhile, Amtrak blames the private railroads for not cooperating. An oversight board will determine the fate of the line and create a precedent – one that will either fast-track dreams for an expanded passenger train network across the country or derail it. 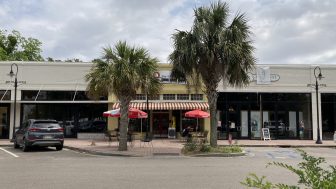 Stephan Bisaha,Gulf States Newsroom
New businesses across from the train depot in Bay St. Louis are hoping for a boost from train tourism. April 27, 2021.

If the Amtrak line gets approved, the biggest benefactors would be the four Mississippi beach towns where the train would stop: Bay St. Louis, Gulfport, Biloxi and Pascagoula.

An economic impact study by the University of Southern Mississippi reported the train could generate hundreds of millions of dollars for Mississippi’s economy from tourism spending.

“People will come here and once they see the charm of downtown they’ll want to come back again,” said Wendy Hayden, a retired resident of Bay St. Louis.

Bay St. Louis’ former downtown, which sits across from the train depot, used to be known for seedy bars and empty storefronts. Now the strip mall has a new restaurant and women’s boutique. A dog store and pilates studio will be opening up soon.

These businesses did not move in just because of the possibility of a new Amtrak line, but owners say the idea of tourists stepping off the train and into their stores made the decision a lot easier.

“Bay St. Louis is one of the best-kept secrets,” said Tonya Hamby, the owner of Mon Amie Boutique. “Amtrak is going to benefit the entire city.”

A passenger train used to travel through the Gulf Coast cities before Hurricane Katrina halted the service – though it ran less frequently and at later hours.

New Orleans Mayor LaToya Cantrell and others in the region have spoken out in support of restoring the line.

I joined other Gulf Coast Mayors & organizations to issue statements in support of the reinstated Amtrak route from New Orleans to Mobile following Amtrak’s announcement that it will be filing a petition with the Surface Transportation Board to permit operations for the route. pic.twitter.com/9bmN7Is00f

The tourism revenue generated by train travel across the country is tiny compared to the nearly $80 billion freight rail industry.

Yet passenger train advocates argue the benefits can’t just be weighed in dollars. Trains provide a greener way to travel than highways and can offer a route between cities unconnected by direct flights.

“There is a part of this that we need to serve our people,” said Knox Ross, the secretary and treasurer for the Southern Rail Commission, which advocates for passenger rail in Mississippi, Alabama and Louisiana. “We give these people hope.” 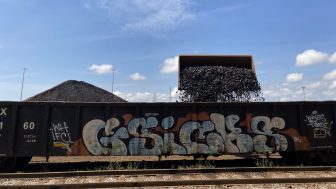 Stephan Bisaha,Gulf States Newsroom
Iron is loaded into a container at the Port of Mobile. April 27, 2021.

The U.S. lags behind other countries in terms of passenger rail. Europe sparks envy for the ease of its city-to-city travel; Japan for its bullet trains.

But when it comes to freight trains, the American industry delivers more goods farther and cheaper than other countries. Railroads account for about 40 percent of all freight movement in the country – the rest moving by truck, pipeline, water or air.

The growth of freight helped lead to an economic boom at the Alabama State Port Authority in Mobile. Goods – from car parts to peanuts and just about everything else – are moved between cargo ships and trains. The port reports that it supports about 150,000 jobs and raises about $660 million in taxes for the state.

But Alabama politicians and business leaders worry an Amtrak train could threaten the port’s growth and lead to congestion and delays on other lines.

Adding a passenger train to a railroad isn’t like a Greyhound bus sharing a highway with 18 wheelers. Passenger and freight trains travel at different speeds and have to wait to pass each other – a task made harder since freight trains can be more than three miles in length.

Despite the challenges, rail experts say the trains can and do share railroads without major disruption.

“The question then becomes where is that sweet spot where they can coexist and at what point does it become a conflict?” said P.S. Sriraj, the director of the Urban Transportation Center at the University of Illinois Chicago. 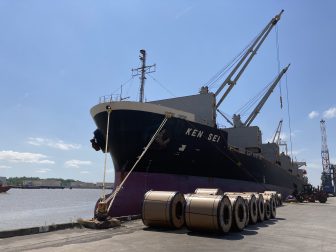 Amtrak commissioned an outside group to assess how many state and federal dollars should be invested to avoid serious delays. Experts said those studies usually take about seven months, but when a year passed without an end in sight, Amtrak decided to move forward without the study. Amtrak points its finger at railroad owners, Norfolk Southern and CSX, for refusing to share detailed data about their businesses. Those companies say the information is confidential, but without it, Amtrak said the study is useless.

“It does actually look like there hasn’t been a clear desire on the part of the freight railroads to actually meet with Amtrak,” said Nick Little, director of the Center for Railway Research and Education at Michigan State University.

“I am particularly concerned about the impact to the Port of Mobile, which has been critical to Alabama’s substantial growth in exports in recent years,” said Gov. Ivey in a filing to the Surface Transportation Board, a federal agency that regulates ground transportation, including freight trains. 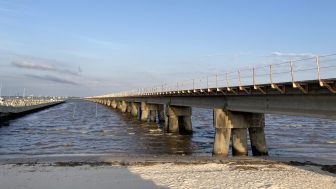 Stephan Bisaha,Gulf States Newsroom
The Amtrak train between the Mobile, Ala. and New Orleans would travel along this bridge in Bay St. Louis, Miss. April 27, 2021.

When The Trains Split Tracks

Tension between freight and passenger rail in the United States isn’t new. It’s actually how Amtrak was formed.

Before 1970, private railroads were required to run passenger trains, but that side of the business was not profitable. To protect the freight side of the railroad business, Congress passed the Rail Passenger Service Act so railroads would no longer be forced to offer service to riders. But Congress still wanted passenger rail, so the law created a federally supported corporation to offer the service. Amtrak was born.

Railroad owners are still required to work with Amtrak to let it use the private railroads to run passenger trains in exchange for compensation. If the companies refuse to reach a deal, Amtrak can ask the Surface Transportation Board to force the owners to let the passenger trains run. Amtrak did just that for the Gulf Coast line on March 16, 2021, after 15 years of trying to restore passenger service.

CSX and Norfolk Southern say the request should be rejected.

The Biden Administration backs Amtrak. President Joe Biden earned the nickname “Amtrak Joe” because of his constant trips along the Northeast Corridor. He wants to see Amtrak expand across the country.

The passenger rail provider recently released a map detailing about 30 new routes across the country, spurred on by the $80 billion for railroads included in President Biden’s infrastructure plan. The decision made along the Gulf Coast will determine whether that dream gets fast-tracked or derailed.

“How does the expansion – or lack thereof – of passenger rail look in the coming years?” Ross, of the Southern Rail Commission, said. “This is an issue that’s much larger than Mobile and New Orleans.”