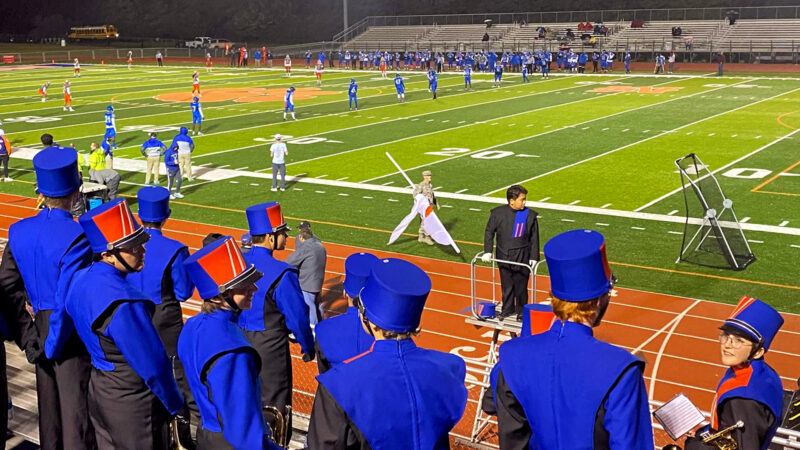 On a Friday night in Mississippi, Madison Central High School’s student band gets ready to play a tune and cheer on their football team, The Jaguars, October 29, 2021.

On a chilly Fall evening in Madison, Mississippi, high school athletes and band members rushed to the middle of the field at Jaguar Stadium to get ready for a Friday night football game — a sign of normality for many spectators and participants here since schools were shut down during the coronavirus pandemic last season. Some of the attendees wore masks, but most didn’t.

The matchup put the Murrah High School Mustangs, from Jackson, against the Madison Central High School Jaguars, from Madison County. The competing schools are just a quick, 20-minute drive away from each other, but their individual approaches toward the COVID-19 vaccine couldn’t be further apart.

Murrah is predominantly Black and athletes are required to get vaccinated or tested regularly. Madison Central, which is mostly white, doesn’t have that mandate for its athletes. Parents on the sidelines from both schools had a wide range of thoughts on the differences.

“I want [my son] to be safe,” Erin Phillips, a Murrah parent who is Black and vaccinated, said. Many people in Phillips’ community have died of COVID, which is one reason she’s glad Murrah instituted a vaccine mandate.

“Football is a very full-contact sport,” she said. “You know you’re breathing hard, pushing on each other. I just wanted him to be more safe than without the vaccination.” 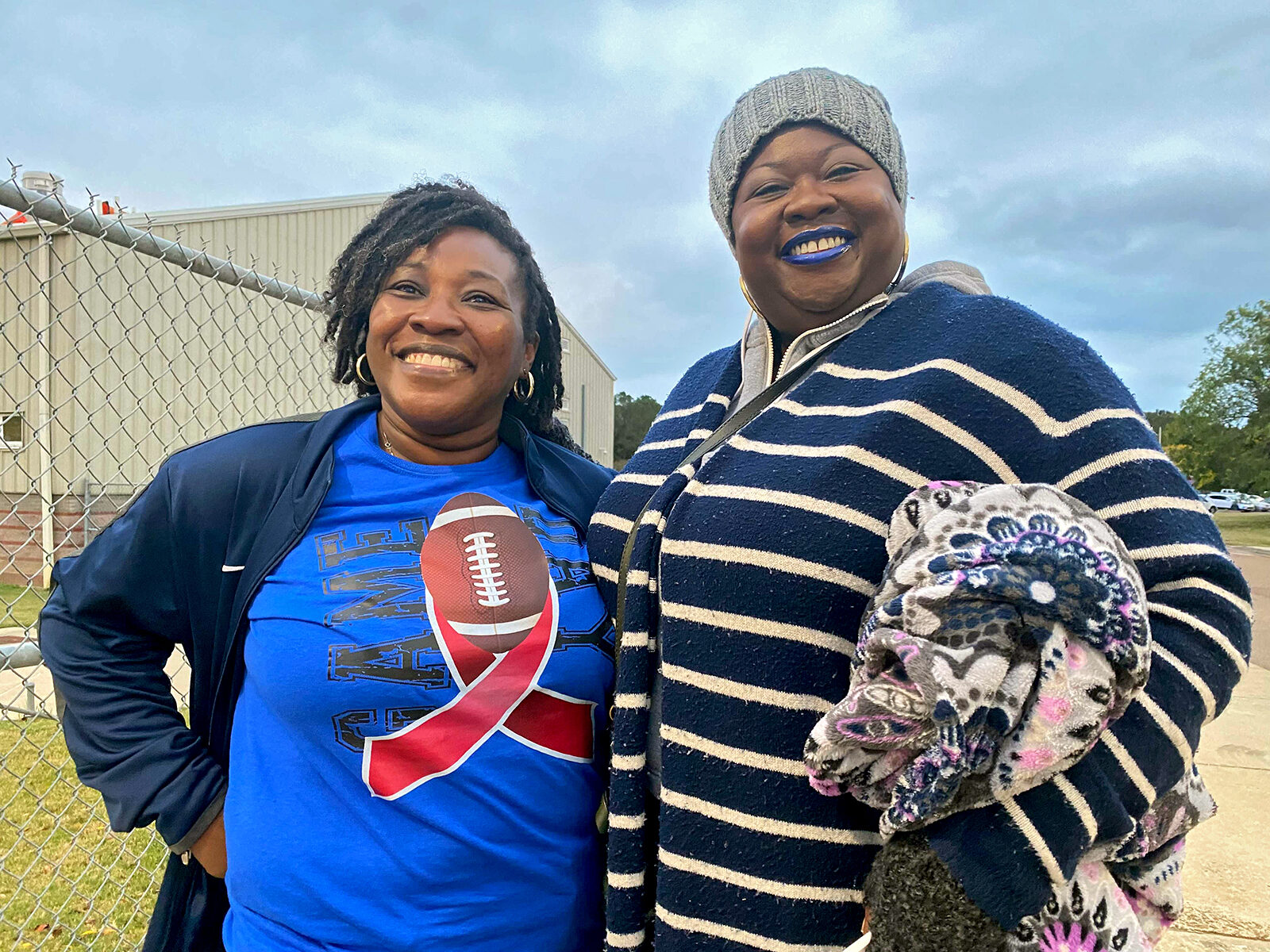 Shalina Chatlani,Gulf States Newsroom
Murrah High School Football moms Lawanda Gholar (left) and Erin Phillips (right) were in attendance at the Murrah vs. Madison Central football game, October 29, 2021. Both moms are proud they got their sons fully vaccinated in time for the season.

Overall vaccination rates still lag across Mississippi, Louisiana and Alabama. When it comes to uptake among 12 to 17 year olds, some national studies show that white teenagers are getting vaccinated more than Black teenagers are.

But data acquired from health departments across the Gulf South show that Black teenagers, like Phillips’ son, are getting vaccinated at roughly one and a half times the rate of white teenagers.

Black teenagers are also receiving more vaccine doses than their share of the teenage population. White teenagers, however, are undervaccinated.

With kids between the ages of 5 to 11 now able to get Pfizer’s low-dose, two-shot COVID vaccine, some experts say a similar trend could happen.

The vaccination rate for Black teenagers, however, is a small win, Dr. Thomas LaVeist said, because vaccination rates across the Gulf South are still some of the lowest in the country overall.

LaVeist, the dean of the Tulane University School of Public Health in Louisiana, worries the lag in overall vaccinations could persist even with younger children now being vaccine-eligible.

“Blacks are doing better, but they’re still not doing as well as they should,” he said. “Whites are dramatically underperforming, and it’s a problem.” 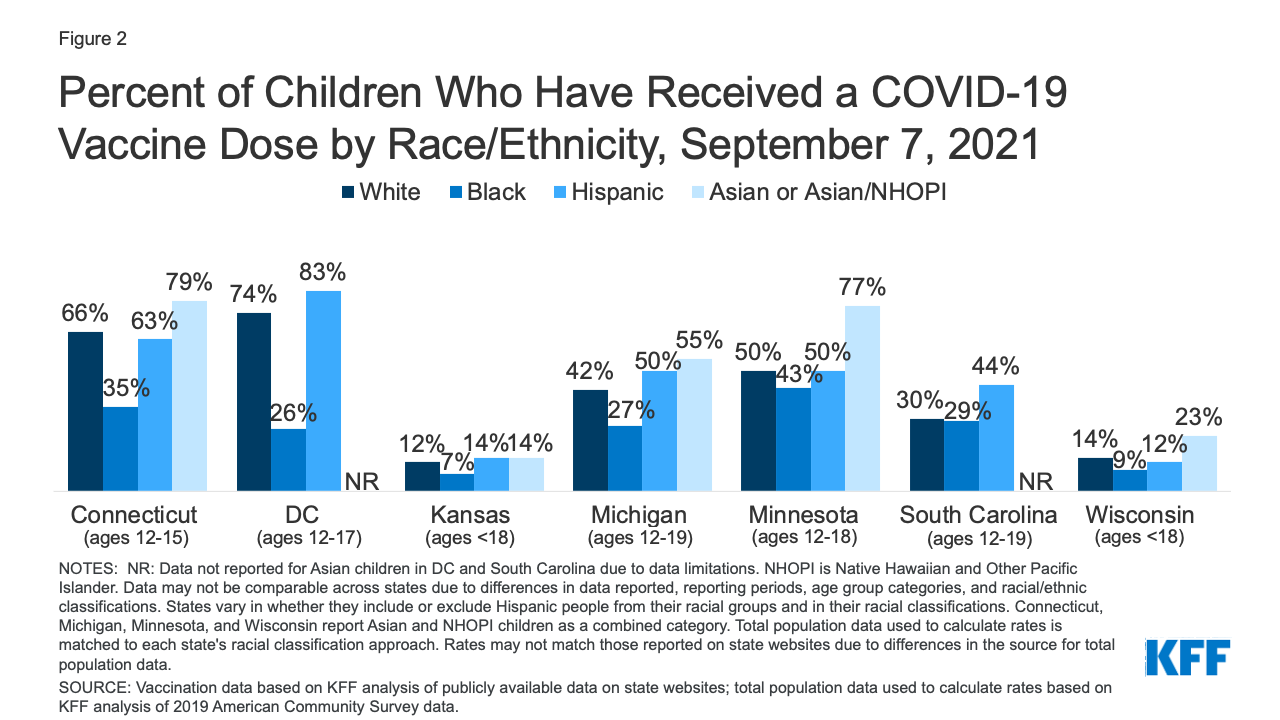 At the beginning of the vaccine rollout, Black communities were undervaccinated. Now, Black residents are ahead of white residents in vaccinations across Mississippi, Louisiana and Alabama, according to a recent Gulf States Newsroom data analysis.

“I’m actually not surprised by that [data], because much of the vaccine hesitancy in the Black community has been around distrust,” LaVeist, who is also on the state’s COVID-19 Health Equity Task Force, said.

LaVeist credits the change in Black vaccinations as a result of health departments across the South consciously working to address that distrust. Devondra Brown, director for the Office of Community Partnerships and Health Equity at the Louisiana Department of Health, said state health officials also thought about accessibility.

“The immediate surge of white Louisianians getting the vaccine was access,” Brown said. “We leveled the playing field with the Black community with access. Those people that would have gotten the shot if they had transportation, regular practitioners, health care providers prior are now getting it.”

Brown says now that accessibility issues have been addressed, vaccine uptake is based on peoples’ beliefs. Many are still searching for answers to their concerns about getting vaccinated, while some hesitancy is still focused around religious, cultural or political lines.

“[They say] I need more information,” she said. “I need to see that there is no long term effects before they get it. And that just happens to be playing out as a racial divide.” 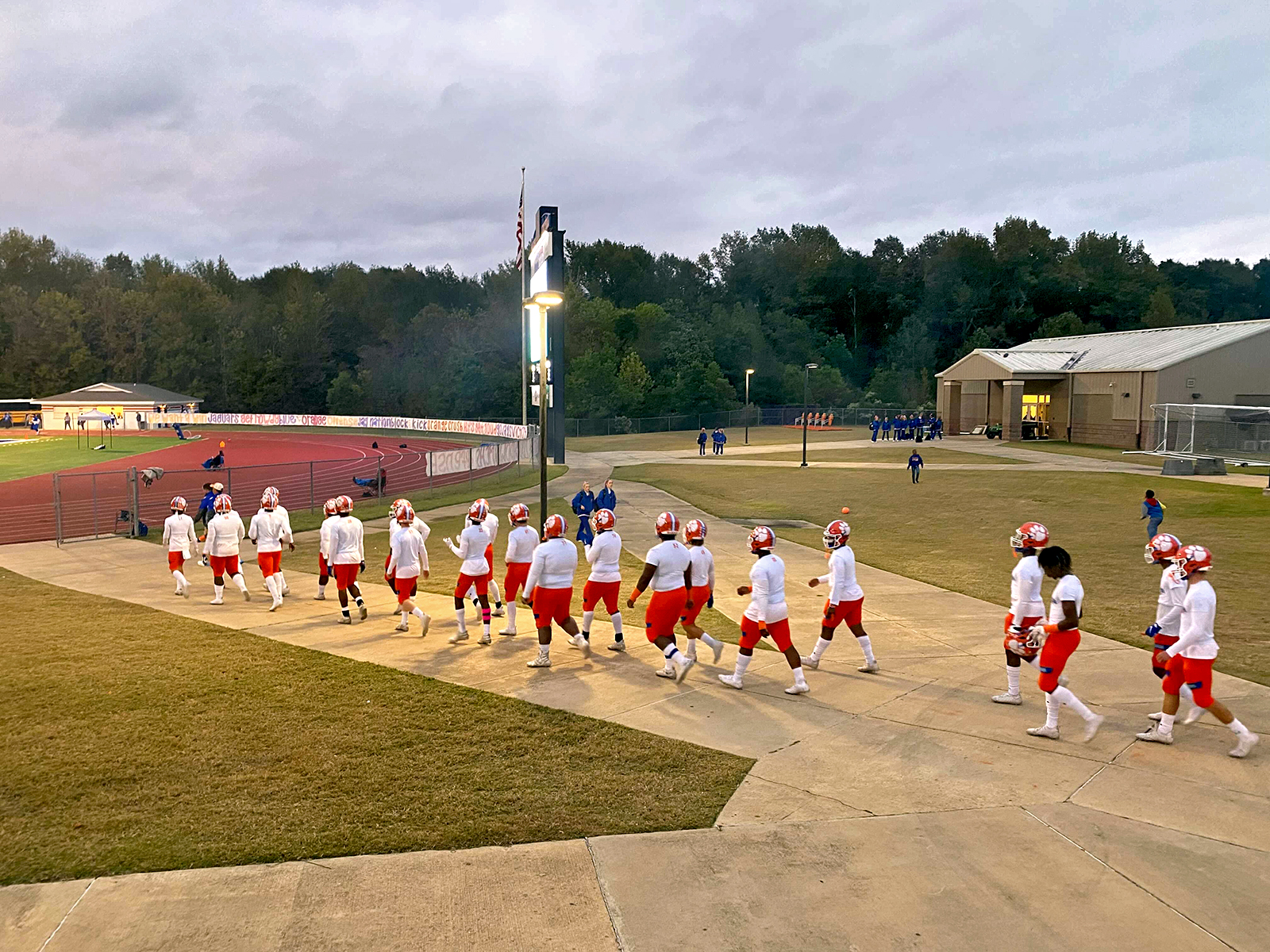 For most of the Black parents at the Murrah-Madison Central football game, getting their kids the vaccine was a no-brainer and they supported mandates. White parents, on the other hand, didn’t want to be forced — even if they did choose to get their kids vaccinated.

Amy Palmer, who was at the game rooting for her grandson on the Madison Central team, says no one in her family is vaccinated and that most people in her family got COVID and were OK.

“We have the antibodies, so why get it?” Palmer said. “[Vaccines for] 5 to 11 year olds are unnecessary unless they got some kind of illness. But that’s up to the parents, not some mandate that might come out.”

Children under the age of 17 are less likely to die of COVID-19, with only about 800 deaths recorded by the Centers for Disease Control and Prevention, but they still represent about 15% of cases nationally.

Ken Ball, a Madison Central parent who was working the grill at the game, said he got all his kids the shot even though there’s no mandate at their school. He’s white and fully vaccinated, but said he believes the decision should still be up to the student’s parents.

Some parents in the Madison County Schools system said they even took their kids out of school over a masking requirement and certainly would resist a vaccine mandate. 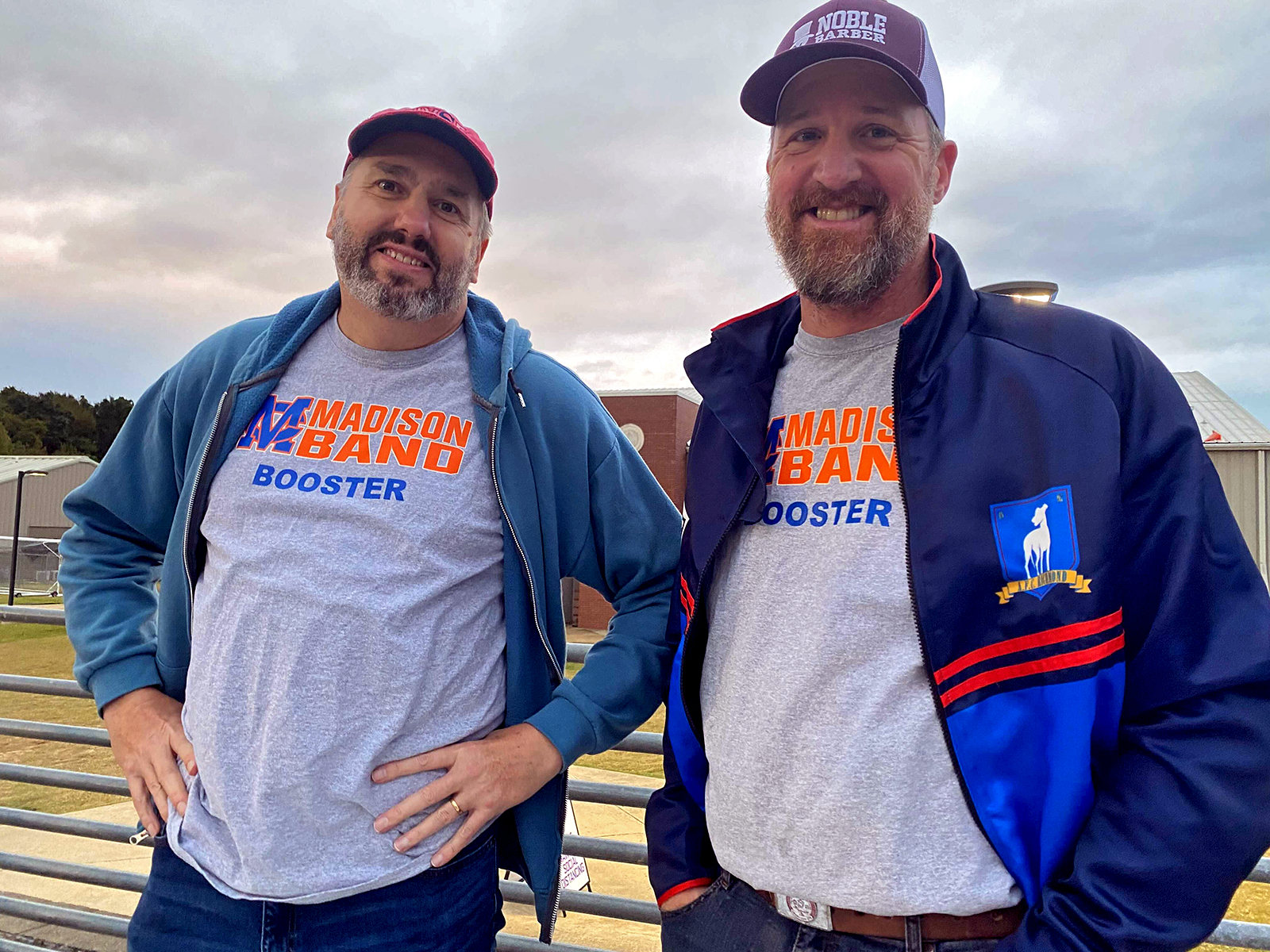 Politics and a sense of liberty do play a role in vaccinations in the South, Dr. Anita Henderson, a Mississippi pediatrician and head of the state’s American Academy of Pediatrics, said.

“A white mom wanted to talk about it, but what she told me was she and her husband were shamed for wanting to get their kids vaccinated,” Henderson said. “But I haven’t had that conversation with any of my Black families.”

Henderson said Black children are nearly three times more likely to die from a severe case of COVID-19 because of issues like underlying health conditions, and many Black parents are aware of those statistics. Practical issues, like child care, might also play a role in driving Black vaccination rates.

“Getting vaccinated helps to keep kids in school,” Henderson said. “That may also be something that black parents are paying closer attention to.”

This story was produced by the Gulf States Newsroom, a collaboration between Mississippi Public Broadcasting, WBHM in Birmingham, Alabama, WWNO in New Orleans and NPR. Support for health equity coverage comes from the Commonwealth Fund.