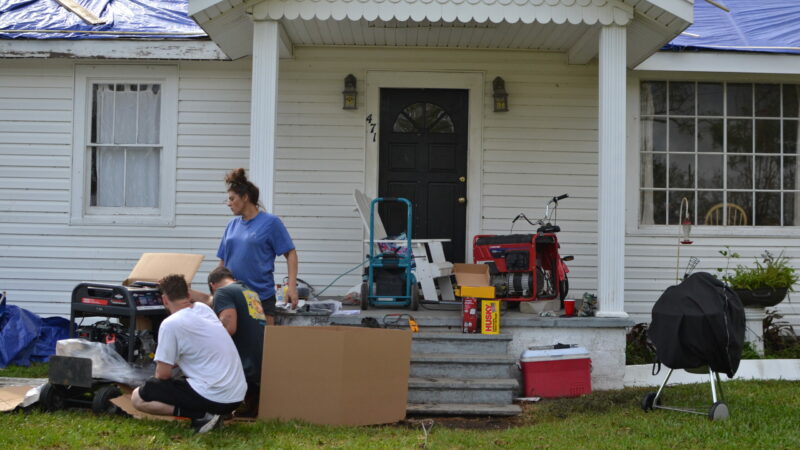 A family across from the Norco plant in LaPlace, Louisiana tries to start up a generator on Tuesday, Aug. 31, 2021, two days after Hurricane Ida struck. In disaster situations — whether natural or financial — Louisiana charities say giving people money is faster and gives them back agency as opposed to waiting for other forms of relief.

After Hurricane Ida, aid groups like the American Red Cross have been providing needed hot meals, tarps for leaking roofs and other supplies to help Louisianans recover.

But some people are saying there’s a faster and simpler way to help after a crisis — just give people cash.

More charitable groups are turning to cash to help after disasters both natural — like Hurricane Ida — and financial — like the pandemic-caused recession. Modern technology makes sending money quick and easy to those that need it. It also lets those getting the help decide what’s best for them, rather than leaving the decision to someone else.

now we’re over $7k! i gave out water in the 7th Ward and to a pop-up food distribution site in Treme. i’m stuffing $2,000 in envelopes to hand out cash next week. after a nap (evacuation adrenaline is gone) i’ll send money to hard hit Indigenous folx + sex workers in need. https://t.co/BejleAoMWx

But cash has limits. The rush to send money can attract scam artists looking to steal aid from who it’s meant for. Giving people cash also doesn’t help when water or food just isn’t available to buy — either because the supplies are out of stock or the store is no longer standing.

“If you don’t have power and you don’t have water, sending 500 bucks doesn’t help at all,” Jeremy Thornton, the associate dean of Samford University’s business school, said.

Groups like the Helio Foundation and the Vessel Project, however, have done more than just send money. They’ve delivered hot meals and small heaters for the coming cold. And experts say that’s the future of disaster assistance — send those traditional supplies for what money can’t buy and cash for what it can.

“We’re learning that these models of direct cash assistance, especially in a crisis, can be quite effective,” said Una Osili, the Efroymson Chair in Philanthropy at Indiana University. “We should not think about one model necessarily supplanting but rather supplementing, complementing and really giving us much more impact on the families that are in need.”

As a Louisiana storm veteran living in the bayou region of the state, Gayle Dardar already had a home generator. Unfortunately, Ida sent pieces of wood straight through it.

“It was just like a bullet crashing into it,” Dardar, a resident of Pointe-Aux-Chenes in Terrebonne Parish, said.

She solved that problem by hauling the generator off of her shrimp boat and using it to power her home. But there was another hiccup — how to pay for gas. Dardar needed lots of it; not only was the power out for a full month, but the area lost its internet connection too, making credit cards nearly worthless.

Enter the Helio Foundation. The small charity, based in Lafourche and Terrebonne Parish, says it’s given away more than $160,000 in cash to people on the bayou after Ida, and it got the money from online fundraising. The aid group drove down and put $400 in Dardar’s hand, which allowed her to keep her generator fueled.

“This was a blessing,” she said. “They have just made it so much better.”

Dardar says she’s also thankful for groups like the Red Cross and the meals it’s provided. But the Red Cross has been criticized for how it uses resources, including spending some on public relations and on aid some people don’t need or can’t use. For example, the Red Cross sent pork to a jewish retirement home after Superstorm Sandy.

One of the advantages of cash aid is that it comes with no strings attached. It puts the decision making power back in the hands of the people who knew best what Dardar and her neighbors needed — themselves.

“They didn’t even have to spend it on something specific,” Dardar said. “It was theirs. It was a gift for them to use whatever it took to make their lives easier.”

People affected by storms can also be cut off from their jobs for weeks or months — the Helio Foundation is also working on a program to restore overturned fishing boats in the bayou — furthering the need for cash to cover the everyday bills and expenses they can no longer pay for. That’s part of the reason why the Helio Foundation expects to continue sending cash for months, if not years, to come.

“We can’t survive in this country without money,” said Raegan Duplantis-Creppell, executive director of the Helio Foundation and its lone employee.

One advantage of cash giving is it doesn’t require much overhead, especially compared to other forms of aid. It took more than a week for the Army Corps of Engineers to install its first roof after Ida at least in part due to red tape.

The Vessel Project says it gave away more than $30,000 to coastal Louisiana parishes with two working moms running the mutual aid group in their spare time.

We @VesselProjectLA have sent out over $30k. We are small (2 people) and we have a no questions asked, barrier free approach to getting funds directly in the hands of folks in need. Mutual aid is the community of the future.

That’s also part of the selling point for donors looking to avoid large chunks of their giving going to administrative fees. But some experts warn that a lack of overhead can lead to fraud.

The Vessel Project received thousands of messages via Facebook from people claiming to be from the coastal parishes and needing assistance. The mutual aid group admits some of the requests could have been fake but said it was more important to get money out quickly to people that need it than to check everyone’s story.

“If we send cash to somebody that didn’t need it or took advantage of us, that’s not on us, that’s on them,” said Dominique Darbonne, the cofounder of the Vessel Project. “Our conscience is clear.”

Extensive vetting can delay getting cash into people’s hands. One reason Alabama says it’s been slow to provide relief for renters facing eviction with the federal Emergency Rental Assistance Program is that the state wants to avoid fraud. By August, only about 9% of the $436 allocated to the state had been given out since the start of the year.

The Helio Foundation says it does take some time to vet requests for help, which has slowed down how quickly the charity can act. But Raegan Duplantis-Creppell said she was surprised how few scammers she ran across — she estimates only four.

“We’ve always had the people that say ‘Well, you know someone’s going to take advantage of you,’” she said. “From the beginning of our mission that has proven to be false.”

Giving cash might be quick, but the speed of money doesn’t mean much when the store shelves aren’t just empty but carried away by wind and floodwaters.

“A gentleman asked me if he could send me a check to buy supplies and I said, ‘It would be greatly appreciated sir, but we’d rather the supplies,’” said Mathew Chouest, the pastor of the First Baptist Church in Golden Meadow. “You can’t eat money.”

Golden Meadow, a bayou town of just under 2,000 people, suffered some of the worst damage by Ida. Chouest says money was worthless in the first three weeks with few places left standing to spend it. He’d rather have supplies — things like water, food and materials for rebuilding.

Large charities like the Red Cross can also usually get more goods for the dollars than the people they’re helping. A food bank can buy 20 times as much food as a person going to a store. These large groups also often have the labor and expertise needed after storms, such as properly repairing roofs.

Experts on charitable giving say that while cash is an effective form of support — and is often better than sending old clothing and other items that can clog up strained supply chains into an area — it’s less helpful in the immediate aftermath of a natural disaster where scarcity is one of the largest problems.

The trend to give out cash unconditionally as aid has been growing for the last couple of decades, though for a while it mostly stayed overseas and as a way of dealing with poverty.

GiveDirectly, a nonprofit organization founded by Harvard and MIT economists, has been the trendsetter for the movement. Since being founded in 2008, GiveDirectly has been sending cash directly to poor families in Morocco, Kenya, Rwanda and other African countries.

In recent years the cash aid movement has picked up in the United States. GiveDirectly offered cash payments to victims of Hurricane Harvey in Houston, Texas in 2017. The coronavirus pandemic, along with the federal stimulus checks sent in response, has also shifted Americans’ thinking about how best to provide aid.

Early in the pandemic, Adelante Alabama Worker Center provided low-wage workers affected by the coronavirus $500. The non-profit organization, which helps low-wage and immigrant workers, says it gave away about $250,000. In Jackson, Mississippi, the Magnolia Mother’s Trust has been running guaranteed income pilots since 2018 for women living in the city’s affordable housing.

Mississippi College started a new fund to provide cash assistance directly to students in need with donations from alumni. The college said the pandemic made the school realize how much its students needed assistance.

But the college has also expanded more traditional types of charity, including starting a food pantry in the spring. That’s partly because Mississippi College saw food insecurity as the largest need, but the college also worried the students would just ask for cash to spend on things like video games.

“We’re trusting our students when they’re saying ‘Hey look, I need help with this,’” said Jonathan Ambrose, the Dean of Students at Mississippi College. “There’s still some sense of skepticism if that’s really what that money is going for.”