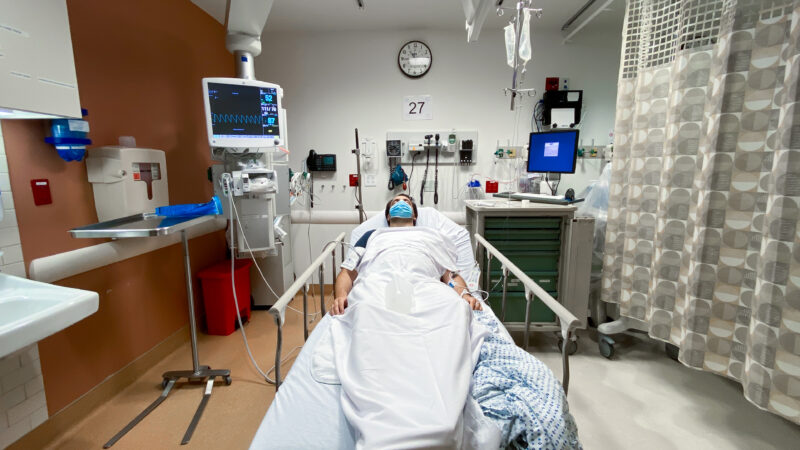 BIRMINGHAM, Ala. (AP) — COVID-19 numbers are again headed in the wrong direction in Alabama, with hospitalizations up more than 50% from a month ago and school cases climbing in the state with the nation’s second-highest death rate during the pandemic.

Although the state’s health system is in far better condition than it was in August and September, when hospitals were all but full and officials feared the network was nearing the breaking point, numbers are slowly creeping upward, said Dr. Scott Harris, the head of the Alabama Department of Public Health.

“We are a little concerned about how our numbers are trending,” Harris said in a discussion held on Facebook live Monday night by the Medical Association of the State of Alabama.

About 400 COVID-19 patients were hospitalized statewide Monday compared with about 250 a month ago, according to health department statistics. Harris called that number “very manageable” for a system that was treating about 3,000 pandemic patients daily in the fall.

“But still, a 25% increase over the last couple of weeks is a reason for concern,” Harris said.

The new, fast-spreading omicron variant has been confirmed in the state, but health officials don’t believe it has overtaken the delta strain yet. Omicron cases don’t respond to monoclonal antibody treatments that have helped patients in recent months, posing a problem once the variant arrives in force, officials said.

Alabama schools reported 750 cases of COVID-19 this week, up about 25% from the 589 last week. The largest increases were in the large metropolitan areas around Birmingham, Huntsville, Mobile and Montgomery plus rural Walker County, northwest of Birmingham.

With only about 47% of the state’s population fully vaccinated against the virus that causes COVID-19, more than 16,350 people have died from the illness in Alabama, according to researchers from Johns Hopkins. The death toll is the 16th highest nationally and the second highest per capita at almost 335 deaths per 100,000 people.

Dr. Michael Saag, an infectious diseases expert at the University of Alabama at Birmingham, said there’s still time for additional vaccinations to stem a tide of new infections. People who aren’t vaccinated make up the vast majority of the people being treated in hospitals, he said, comparing a coming wave of infections from the new omicron variant of the virus to an approaching tornado.

“There’s a storm coming and we need to get in our safe place, and the safest place we can be is with vaccines,” said Saag, who recovered from a bout with COVID-19 early in the pandemic.

The rolling average of daily new cases in the state over the past two weeks has increased by 332, a jump of 66.6%, according to researchers at Johns Hopkins University. While there were about 197 new cases per 100,000 people in the state during the period, that ranks 50th nationwide.

Dr. Aruna Arora, president of the state medical organization, said doctors are nervous about what’s going to happen to people who haven’t been vaccinated and gotten boosters.