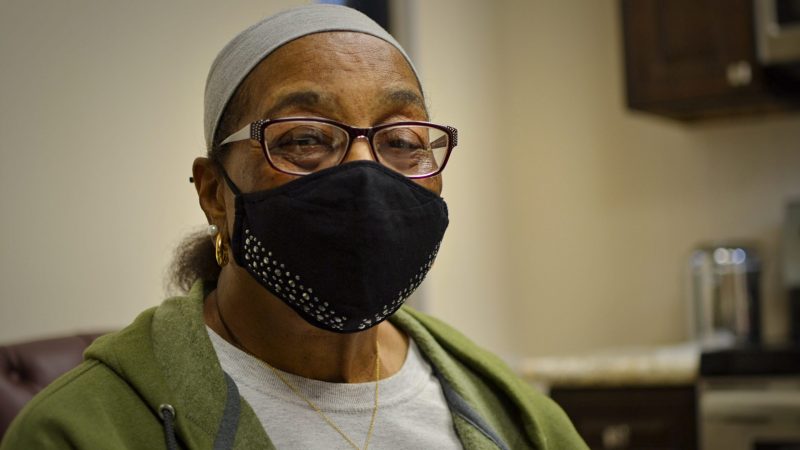 Georgia Washington, 79, sits at the Jewel J Newman Community Center in Scotlandville, Baton Rouge. The senior got coronavirus last year, and is eager to find a vaccine.

Georgia Washington, 79, has spent most of her pandemic days quarantining at home. But she stays busy by cooking some of her favorite foods: red beans, mustard greens, green beans and fish, “sometimes fried, sometimes not.”

“I was very weak and I was tired,” she said. “So they told me to get tested, and they told me I had the virus.”

Washington has lived in Southern Heights, a predominantly Black neighborhood in the northern part of Baton Rouge, since 1973. There aren’t many resources in this part of town, so when Washington fell ill in March, she had to get a ride 20 minutes south to get medical attention.

Now that she’s already experienced the virus, Washington is eager to get vaccinated. But she’s again finding it difficult to access health care. She’s been trying for weeks, checking multiple times at pharmacies in the area. Now she’s on a waiting list.

As vaccine supply runs low across the country, snagging a shot in the arm is already hard for most people. An NPR analysis of vaccination sites around the country found that in cities like Baton Rouge, access is even more uneven. Of the 20 official sites providing vaccinations in early February, 15 are located in the southern part of the city, a predominantly white and affluent area. It’s also where the vast majority of medical facilities are located.

Communities of color, who have been disproportionately affected by the COVID-19 pandemic, are now at risk of being left behind in the vaccine rollout.

A Hard Task That’s Even More Challenging For Some

Ever since an interstate was built through the northern part of Baton Rouge in the 1960s, the population has struggled with housing and food insecurity, poverty and crime. These inequities have always fueled disparities in health care. The vaccine rollout is just the latest example.

“When you go to North Baton Rouge, there are very few choices. And then how many of those are participating in the vaccine program?” said Tasha Clark-Amar, CEO of the East Baton Rouge Council on Aging.

In Baton Rouge, Clark-Amar runs 25 senior centers around the city.

“I was getting calls, one or two types of calls,” Clark-Amar said. “One, I’m not going because my grandkids said don’t do it. The second type of call I got is: Where can I get it? How do you get it? How do you sign up? Is there an application?”

Clark-Amar decided to use her senior network to conduct outreach efforts to raise awareness and build trust. In fact, on the council’s talk radio show last month, Clark-Amar invited Courtney Phillips, secretary of Louisiana’s health department, to talk to seniors.

And the council also stepped up to fill the pharmacy gap by providing vaccines. Clark-Amar said the council organized a pop-up clinic in mid-January, giving out around 1,000 doses that they secured from Albertsons.

Another time, a community health clinic planned to give Clark-Amar around 150 doses for her seniors. But when the clinic couldn’t deliver on that promise, she had to cancel the pop-up event last minute.

“I was livid. I was so angry and frustrated,” she said. “Thirty-five of the people we had registered are between the ages of 80 and 99. Now you tell me how am I supposed to pick?”

Clark-Amar has been able to schedule other pop-up events. But, she said a patchwork of resources is part of life in many under-resourced Black communities.

Nationally, the white population is being vaccinated at much higher rates than the Black population. In late January, Kaiser Health News looked at vaccination data across 23 states, and in each of them, there was a major disparity. In some places like West Virginia, white residents are being vaccinated at around double the rate of Black residents.

In Hinds County, Mississippi, where the city of Jackson is located, there’s only one major drive-thru site. It’s centered in downtown Jackson, which is wealthier and whiter and has more medical facilities. The drive-thru site is nearly a 30-minute drive from the heart of Hinds county, which is 73% Black.

That site was only added in late January, weeks after the state had put two drive-thrus in the wealthier, whiter suburbs just outside the city.

“It took us a little bit of time to get it logistically set up to make sure we had a Hinds County site,” Dr. Paul Byers, Mississippi’s epidemiologist, acknowledged at a recent press conference, “but we were always planning to do that. And we are glad that we have that now.”

The data the state has released so far shows that around 17% of vaccines have been given to the Black population, which makes up about 38% of the state’s overall population.

“We know it’s a problem,” Byers said. “We know there’s a couple things that could be happening. Certainly hesitancy, but are we putting the vaccines in a place where African Americans can easily get to it?”

Alabama’s State Health Department has not released any demographic data on its online vaccine dashboard. But in a recent press call, Alabama’s state health officer Dr. Scott Harris acknowledged the state’s challenges with getting vaccines to the Black population.

“We very much care about trying to achieve equity with vaccine distribution, it’s just a state that has a lot of vaccine hesitancy,” Harris said. “We particularly have hesitancy among the African American population just based on the history of somewhat checkered race relations in our state.”

Louisiana’s health department recently released demographic data on its vaccine rollout. The data shows just 10.3% of vaccines have gone to the Black population, which accounts for about 33% of the state’s population.

But over half of recipients fall into an “unknown” or “other” category.

“Quite frankly, we don’t know what’s happening there as to vaccines by race,” the Gov. of Louisiana, John Edwards said in a press conference last month.

State officials say they’re going to work with hospitals and clinics to get more complete data.

A Trend Rooted In History

Thomas LaVeist, a dean and health care equity researcher at Tulane University in New Orleans, said another issue is the lack of federal vaccine supply. But, he said, medical deserts go back into the early evolution of health care.

“I do think that the South is perhaps more of a problem than some other parts of the country,” LaVeist said. “Part of that is a long history of racism, Jim Crow and in some cases, intentional actions that were taken to ensure that some communities did not have access to health care and other resources, while others did.”

LaVeist said the privatization of health care has set up a medical system that was from its very origins unequal because it’s driven by profit. Since hospitals don’t have restrictions on where they can be located, they go to neighborhoods with patients that can afford premium prices instead of neighborhoods that may have to rely on services like Medicaid.

District Councilwoman Chauna Banks, who has represented northern neighborhoods in Baton Rouge since 2013, said that’s exactly what happened in the city. Banks said some urgent care clinics recently came to the region, but there is still no large-scale facility.

She said private health care providers weren’t interested in coming to the neighborhood.

“They said it was a myth that there was a need [in North Baton Rouge],” Banks said. “It wasn’t important for them to make health care convenient for the people in the northern part of the parish.”

She said the current Mayor-President of Baton Rouge Sharon Broome, who was elected in 2017, is interested in helping the northern part of the city.

And throughout the pandemic, Banks said serving residents with coronavirus testing, providing information on masks and early vaccine rollout has been a local community effort.

“There’s no, like, just public distribution of vaccinations, like what we see on TV with the cars lined up. We don’t have that here,” Banks said.

LaVeist, who is also co-chair of the Louisiana COVID-19 Health Equity Task Force, said the state is considering solutions to equity issues in vaccination distribution. The state may use National Guard teams to go into underserved neighborhoods and hold mass vaccination events. The state is also creating relationships with groups like the East Baton Rouge Council on Aging, which reaches vulnerable populations.

“What are the organizations that have a freezer that can keep the vaccine at extremely cold temperatures, where are they located? They are less likely to be located in predominantly African-American or Hispanic communities or native communities,” LaVeist said.

That’s why LaVeist said the community partnerships between the state and local providers will be an important vaccine rollout strategy. He said this type of work has to happen now before the rollout goes into the next stages, or else existing health care gaps will only get wider.

“We have a health care system that wasn’t organized from the beginning to ensure there was an equal distribution of health care throughout the country,” LaVeist said. “And what we are seeing now is the vestiges of that.”