UAB Doc Predicts New Cases Of COVID Could Rocket To 13,000 A Day By The End Of August 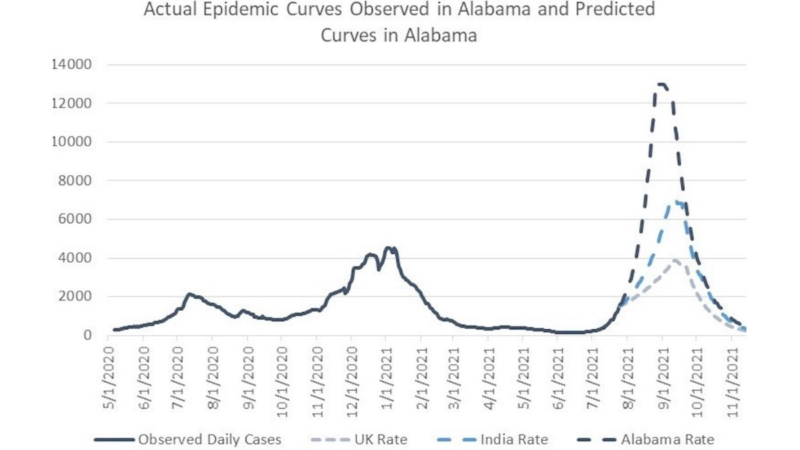 The University of Alabama at Birmingham

If you think the recent spike in COVID pandemic data is concerning, a new study by a professor at UAB will give you a lot more to worry about.

Dr. Suzanne Judd, who teaches in the school’s Department of Public Health, has released a report that says Alabama could reach a peak of 13,000 new cases per day by the end of August.

That number is roughly five times the number of new cases reported by the Alabama Department of Public Health on Thursday, more than triple the highest 7-day moving average recorded in early January, and more than 100 times the lowest 7-day average this year — a mark set just 24 days ago.

Put another way, the number of new cases each day would multiply more than a hundredfold by Aug. 26, just 49 days after the low point of 121 new daily cases on July 6.

Under the model using info from the current spread in South Alabama, the number of cases from August through October is predicted to total 568,393, which is only slightly less than all of the cases the state has reported from the beginning of the pandemic to date. That would mean the total cases would nearly double by the end of October, surpassing one million.

Hospitalizations would also top out at around 7,800 by Sept. 1 using Judd’s worst-case scenario, a number that’s more than six times Thursday’s total of 1,251 COVID inpatients. The model also predicts that hospitalization totals would be above 1,000 for 88 days; Alabama surpassed that figure Tuesday.

Deaths attributed to COVID, which have yet to increase significantly in this latest surge of infections, would rise to 5,684 fatalities from August through October, according to Judd’s South Alabama-based model. By comparison, 11,516 people have died in Alabama from the virus since the beginning of the pandemic in March 2020.

Judd’s models also predict that a peak of almost one-fifth of the state’s population could be out of work or school from about Aug. 15 to Sept. 5, which includes Labor Day weekend. Most of those people would be out of action because of quarantines instead of illness, she said.

“It is hard to estimate the number of contacts a person may have going into the new school year. Depending on how exposure occurs in schools, an indoor gathering could result in 30-50% of a school, team, or group in quarantine at one time,” Judd said in the press statement.

If that prediction holds true, the huge increase in infections could have a devastating effect on efforts to return students to traditional in-school learning, as well as on fall high school sports such as football.

Judd said that if her models are correct, Alabama would need to reach 90% herd immunity — the level of vaccinations plus immunities resulting from previous COVID infections — to stop the spread of the virus. She added that the models could be affected by several factors, including an increase in vaccination rates; the restart of schools, which comes next week for much of Alabama; whether people wear face masks at nearly all times; and changes in behavior such as avoiding large crowds.

As for ways to stop this dire prediction from coming to pass, Judd echoes what her medical colleagues and public health officials across the nation have shouted from the housetops for months: social distancing, getting the vaccine and wearing masks.