Families in need received more from the social safety net in 2021. How helpful was it? 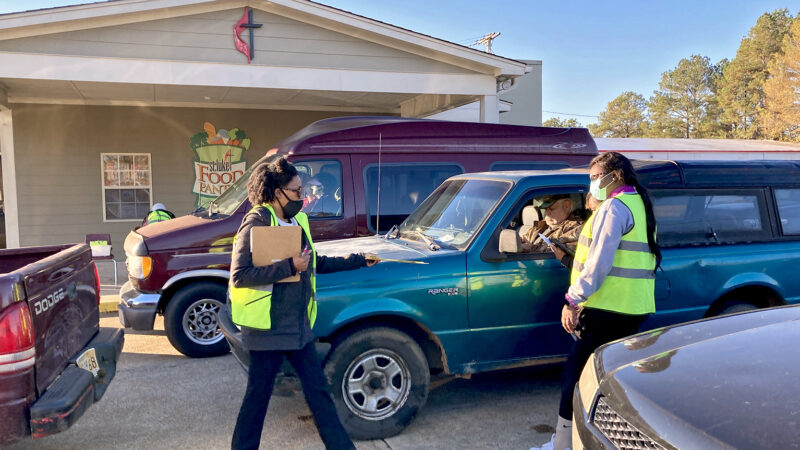 Cars line up to receive food and supplies at the Saint Luke’s Food Pantry in Tupelo, Mississippi. December 2, 2021

On paper, families in need in the Gulf South have access to a lot more government aid this year, but it’s hard to say those families are better off when looking at the line of cars at the Saint Luke’s Food Pantry parking lot in Tupelo, Mississippi.

On a clear-skyed Thursday morning in December, drivers arrive more than an hour before the pantry opens. By the time food boxes start being handed out at 8 a.m., six rows of cars fill the small lot — with dozens more parked on the road waiting to get in. By noon, the pantry will serve 559 cars. That’s been the standard for 2021, according to volunteer Lee Stratton.

“They’ll be in the streets with the parking lot full probably for the next three hours,” Stratton said. “People need help, you know?” 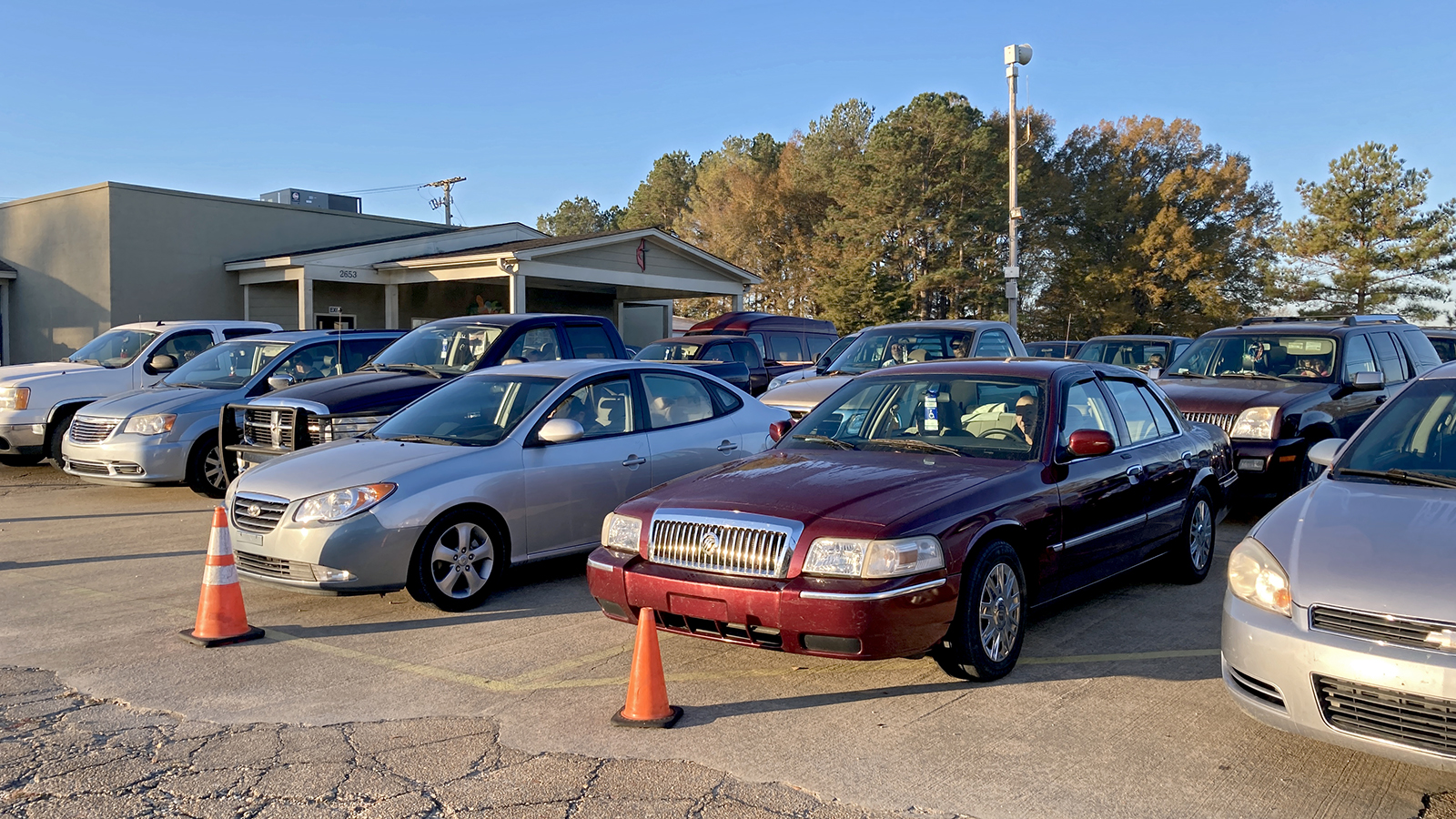 Stephan Bisaha,Gulf States Newsroom
Six rows of cars wait at the Saint Luke’s Food Pantry a half hour before the pantry opens. December 2, 2021

The social safety net received some important upgrades in 2021 — SNAP benefits, better known as food stamps, went up about 25% in October; From July to December, the Child Tax Credit gave out monthly payments to families for each kid under 18; Mississippi also raised TANF for the first time in 22 years.

The increase in aid is especially important in Alabama, Louisiana and Mississippi, which have some of the highest poverty rates in the country. But experts warn the changes don’t do enough to remove barriers keeping people from accessing that aid. Many families say they are doing better today than before the coronavirus pandemic due to the extra benefits, but some say they are doing worse. Just as many aren’t sure how to gauge it — still reeling from the pandemic’s effect on the economy along with the cost of food and other essential items increasing from inflation.

“Long term we will see the policy shifts will benefit families. But where we are right now we can’t say that because we still are in the pandemic,” said Aisha Nyandoro, CEO of Springboard To Opportunities, a charity helping families living in Jackson’s affordable housing.

Historic SNAP increase helps some, but not all 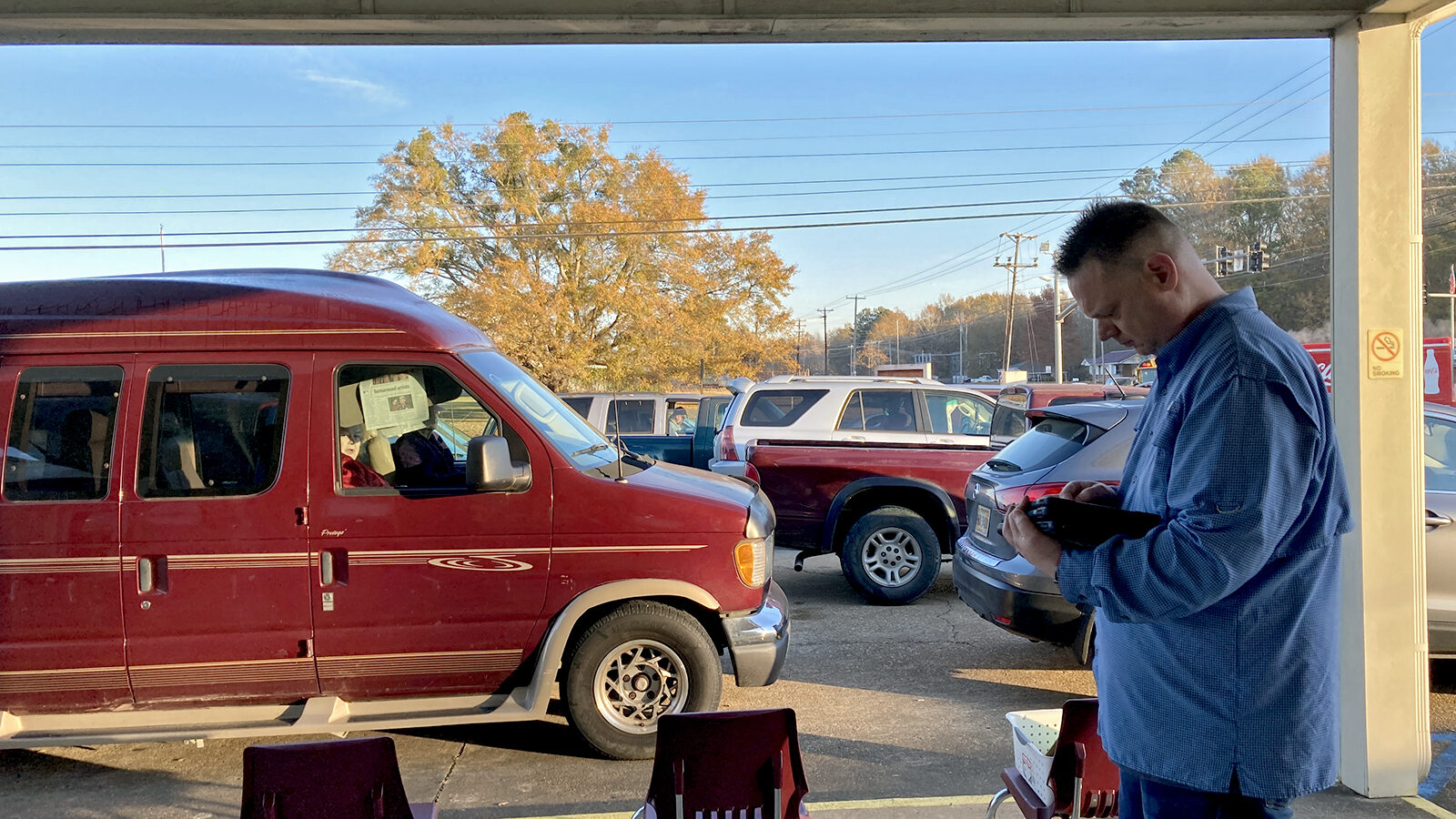 SNAP, or the Supplemental Nutrition Assistance Program, is one of the most widely used federal welfare programs — servicing about 38 million people across the nation with one in every six people in Alabama, Louisiana and Mississippi receiving benefits in 2019.

The October increase was seen as a cause for celebration by many advocates in the fight against hunger for one reason: It marked the first time purchasing power with the plan was increased since 1975.

The change was spurred by the 2018 Farm Bill, which led to a review of how the program decides how much money to give families to buy certain groceries each month. Previous increases to the program were done solely to catch up with inflation.

But the 25% increase is only a projection based on the average SNAP recipient. How much people receive from the program is determined by how much they make, leading to some families seeing their benefits decrease this year.

That includes Ashanti Mundy from Guntown, Mississippi. McDonald’s raised her pay to $11 per hour this year — a welcome consequence of the country’s tight labor market. But the extra pay caused her SNAP benefits to decline.

Experts call this a benefit cliff — when someone on welfare starts earning more money, the loss in government aid that’s triggered can make that person worse off financially. In Mundy’s case, she took one financial step forward with her raise, but the lost benefits caused her to take another step or two back.

Temporary Assistance For Needy Families, or TANF, is likely the program most people think of when they imagine welfare — providing cash assistance for families with little income.

In May, Mississippi increased how much it gives families on TANF, but the bump left advocates unimpressed.

Before the increase, Mississippi was the most stingy state when it came to TANF benefits — offering a family of three with no other income $170 a month. The new amount only moved Mississippi up to fourth from the bottom, beating out just Arkansas, Alabama and Louisiana.

Mississippi now offers a family of three with no other income $260 a month — it’s $215 in Alabama and $230 in Louisiana, according to the Center On Budget and Policy Priorities. All three states fall far below the median state amount of $492.

The Mississippi update also failed to address why so few people in the state use TANF. In 2019, less than 1% of Mississippians living below the poverty line were on the program. The economic impact of the pandemic nor the recent increase in benefits did much to change that. New data from the Mississippi Department of Human Services show that there were nearly 4,000 fewer residents on TANF when compared to the same time in 2019 — a more than 65% decline.

“TANF has kind of been eroding as a safety net program for many years,” said Matt Williams, the director of research at the Mississippi Low-Income Child Care Initiative. “The fact that it did not serve as a real safety net during the pandemic — you can’t get a more glaring example of that fact.”

Experts blame the program’s rigid rules — things like work requirements, mountains of paperwork and drug testing — for its decline in usage. Advocates have also accused the program of being punitive. If an applicant fails to meet any of those rules, they could be labeled as non-compliant and lose other benefits as well, like SNAP.

Until November, Mississippi also seized all child support dollars paid to a mother in the program. A new policy will allow $100 to “pass through.” 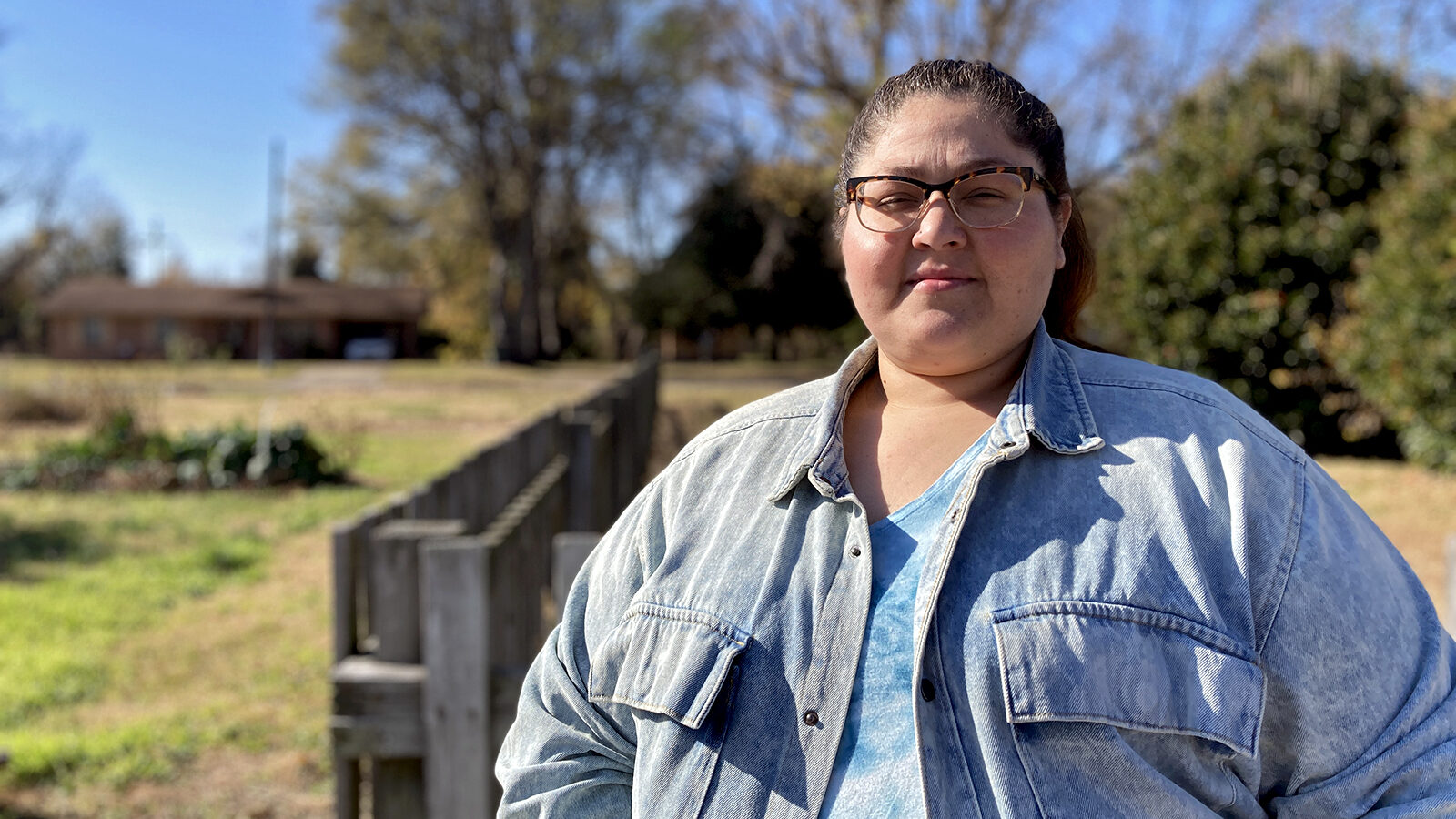 Stephan Bisaha,Gulf States Newsroom
Laura Sifuentes lives in Rosedale, Mississippi. She gave up her job to care for her kids, nieces and nephews when they went to school virtually.

A program that’s received a lot of praise for avoiding the strings that tangle up TANF participants is the Child Tax Credit, which was approved by Congress as part of the American Rescue Plan in March.

In July, the program began sending monthly payments to families based on the number of children and their age — $300 a month for each child under six, and $250 a month for every other child under 18. Parents will also get a lump-sum payment when they file their taxes in 2022.

Laura Sifuentes said the Child Tax Credit was a big help after the pandemic forced her to leave her job working with a local Head Start program in Rosedale, located in the Mississippi Delta, to take care of her own kids when schools went virtual. At $12 per hour, Sifuentes considered it a high-paying job for the area.

The monthly payments let her pay for things like National Honor Society registration for her daughter and new clothes for her growing boys.

“It’s a big help because I’m able to do more for my children,” she said. “The CTC has been a blessing.”

But even the limited restrictions of the Child Tax Credit can still prevent it from getting to those it’s designed to help. Kristen Murphy raises her son alone in Rosedale. She should have received the Child Tax Credit, but her former partner claimed their son on his taxes.

Murphy’s since reached out to the IRS to get it straightened out but was told she’d have to wait as the agency works through a long backlog of taxes — more than 60,000 in Mississippi alone.

“My momma always told me good things come to those that wait,” Murphy said. “She’s always been right. Eventually, what I’m supposed to get for my son he’ll have. It’s just waiting. That’s the struggling part.”

The Child Tax Credit sent out its last monthly payment on Wednesday, with the future of the program unknown. Democrats hope to extend it for another year and currently have it in their $1.7 trillion Build Back Better bill.

The bill, however, is unlikely to pass before December 28, the day the IRS said Congress needs to pass the act to get the next round of payments out by January 15.