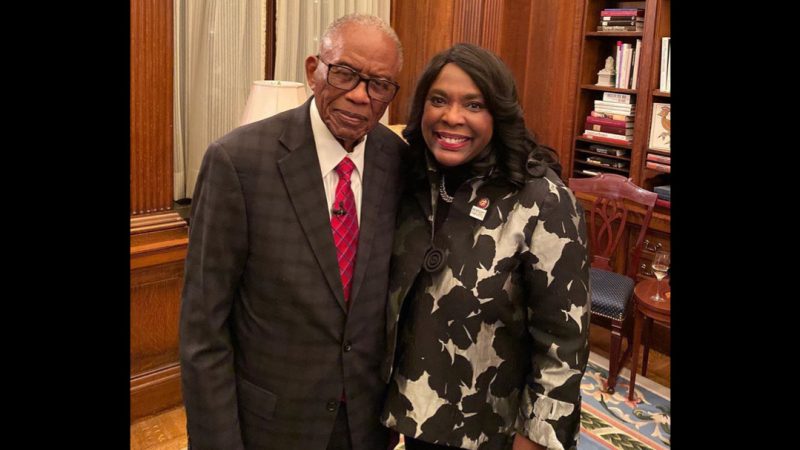 Civil Rights Attorney Fred Gray and U.S. Rep. Terri Sewell at the opening of the Library of Congress’ exhibition on Rosa Parks in 2019.

Even during a pandemic, you can find 90-year-old Fred Gray Sr. at his law office in Tuskegee. He’s been fully vaccinated against COVID-19.

“He’s still working every day,” Fred Gray Jr. said. “It is not because he has to, but it’s because it’s that fire in his belly and it’s because he still wants to help people.”

Gray Jr. and his dad are partners in their law firm. Gray Jr. said his dad just won’t slow down. In fact he’s currently working on behalf of the Macon County Commission to remove a confederate monument in the heart of downtown Tuskegee.

Gray Jr. said his dad’s drive and tenacity are only part of the reason he should be awarded the Presidential Medal of Freedom, the nation’s highest civilian honor.

“His IQ and his work is right up there with men like Thurgood Marshall, Oliver Hill and Wiley Branton,” he said.

Fred Gray Sr. began his law career in 1954. He was thrust into the national spotlight the next year, with a client named Rosa Parks. Parks was arrested for refusing to give up her seat on a bus in Montgomery. Parks’ arrest sparked the Montgomery bus boycott which led to the case of Browder versus Gayle. That case ended racial segregation on public transportation in Alabama. Then in 1964, Gray Sr. led the case that desegregated Alabama’s public schools in Lee versus Macon.

But his fight didn’t stop in the courtroom. In 1970, he became one of the first Blacks to join the Alabama Legislature since Reconstruction.

Patricia Refo is president of the American Bar Association. She said Gray Sr.’s nearly seven-decades’-long career represents the kind of work all lawyers aspire to.

“He’s used his legal skills throughout his entire career for the betterment of his fellow citizens,” she said. “He’s just an extraordinary example of the good that a lawyer can do.”

In a letter last month, U.S. Rep. Terri Sewell, D-Birmingham, called on President Biden to honor Gray Sr. with the Medal of Freedom because of his groundbreaking work. Biden has yet to award anyone with the high honor since he’s taken office.  But Sewell said she feels confident the president is looking into it.

“I believe that it is incumbent that we award this American hero as a testament to the extraordinary sacrifices and leadership that he’s shown in really changing our laws and desegregating public accommodations; that’s what the Montgomery bus boycott was about,” she said.

Sewell calls herself a direct beneficiary of Gray Sr.’s lifelong work. She’s Alabama’s first Black congresswoman and a former lawyer. She said she can’t imagine what it was like to practice  law during the civil rights movement.

Gray Jr. said his father’s work was dangerous and he was threatened.

“I don’t know if it was the KKK or who it was, but there was a list of houses or targets for bombings and our house was one of them,” he said.

Like so many foot soldiers of the Civil Rights movement, Gray Sr. put his life on the line defending people who looked like him in the search for equality.

“Attorney Gray’s contributions to our democracy are infinite,” she said. “In the words of one of his clients, which was Dr. Martin Luther King Jr… Fred Gray is a drum major for justice, peace and righteousness.”

The Biden administration has not issued a timeframe for when it’ll announce honorees for the Presidential Medal of Freedom. Sewell said she’s hopeful that Fred Gray Sr. will receive the nation’s highest civilian honor.