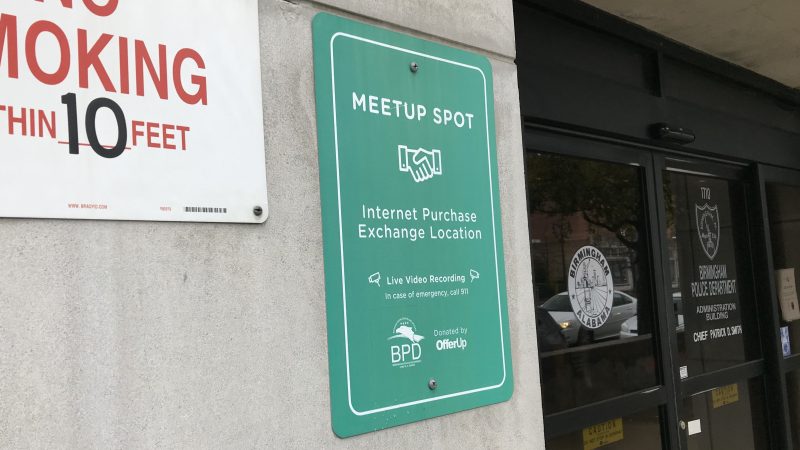 A sign by the entrance to the Birmingham Police Department headquarters notes where internet purchases can be safely exchanged.

Online retailers such as Amazon may be a prominent way to shop online, but plenty of items are sold between individuals through the internet as well. On occasion, that can turn deadly.

In December, Destiny Washington, a 20-year-old University of Alabama at Birmingham student was shot and killed outside the student center. Police said Washington was exchanging a pair of Airpods she sold online when she was shot allegedly by the buyer.

“Meeting up with someone in a place that you’ve never met a stranger…is a dangerous practice,” Birmingham Mayor Randall Woodfin said in a Thursday morning press conference.

Woodfin referenced another recent case where police investigated an internet sale transaction that resulted in a robbery in-person. He said the victim was not injured.

Woodfin said the lobbies at the Birmingham Police Department headquarters and the four precincts are available as safe locations for exchanging online purchases. Cameras are set up and police officers are present.

He said the downtown headquarters is available during regular business hours and precinct lobbies are open 24-hours a day.

“Police won’t be involved in your exchange. If you need them there for safety, they’re there,” Woodfin said.

The Mayor also announced at Thursday’s press conference that he plans to seek a second term during the municipal elections in August. He has not made a formal announcement but has been raising money for his campaign.